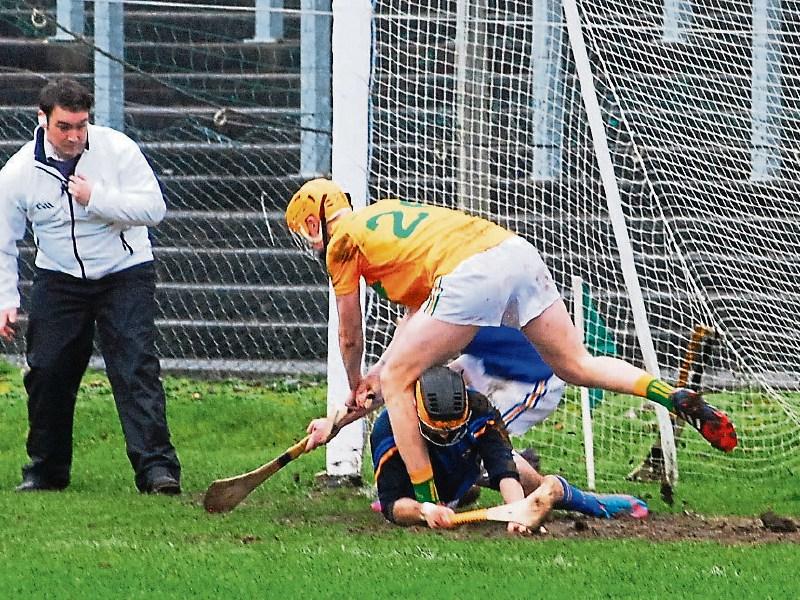 Leitrim were left with a case of the dreaded ‘what if’ last Sunday as they mounted an extraordinary second half fightback that fell just short against Longford.

Trailing by 15 points early in the second half in Pairc Sean Mac Diarmada, Leitrim incredibly closed the monstrous gap to just the puck of a ball in added time and were pushing hard to an unlikely and frankly incredible equaliser when referee Sean Hynes sounded the final long whistle.

It was unlikely because, for 45 minutes, Longford looked a class above a lethargic and sloppy Leitrim whose lack of games told in poor touch and sloppy execution.

It was equally incredible because once Clement Cunniffe grabbed a goal out of nothing 12 minutes into the second half, Leitrim were transformed - a team that was struggling were now dominating and finishing like a train, scoring an unanswered 1-4 and almost snatching an incredible draw.

But they didn't and they must be kicking themselves that they performed so poorly for the first 45 minutes, Longford completely dominating the exchanges as their defence closed down the Leitrim attack while the impressive Conor Mullane led the Green & Gold defence on a merry dance.

Mullane would hit 1-8 on the day while Patrick Walsh punished indiscretions with some deadly accurate freetaking.

Leitrim had their own freetaking genius in Conor Byrne of the Thomas Davis club in Tallaght, the Dublin man making a huge contribution with 1-9, seven points from frees. The new addition to the Leitrim ranks is a huge boost and when Leitrim have a bit more game time under their belts, they will be a formidable outfit.

It was the lack of game time that probably undid Leitrim as it took them a long time to get going. The next game, against Warwickshire on Sunday, March 5, promises a tough encounter with former Antrim hurler Liam Watson giving the Birmingham outfit an unexpected boost.

Longford got quickly off the mark with a point apiece from Patrick Walsh and Cathal Mullane, Walsh from a free and Mullane after pouncing on an error from a defender. Leitrim’s Conor Byrne and Walsh swapped points from frees before Byrne added another to keep the home side in touch with the visitors.

Longford’s Eugene Kiernan had a sniff of a goal but swung wildly at the sliothar, the ball going out for a 70 that Walsh easily tapped over.

Colm Moreton responded with a good effort from play before Kiernan had another chance with a fresh air swipe on a long delivery as he was unmarked behind the defence.

Clement Cunniffe profited from good work from Liam Moreton & Zak Moradi to point but Longford continued to stay in front with good scores from Seamus Hannon & Mullane but when David McGovern pounced on a loose clearance to score, Leitrim were a point in arrears after the first quarter.

But then Longford and Cathal Mullane in particular went into overdrive and it all seemed to be started by a heavy collision on the Longford man, Padraig O’Donnell going into the book. Mullane tapped over the resulting free before a long Mullane run left Paddy Farrington with a relatively simple close range finish for the game’s opening goal.

The scores started to flow over with Hannon & Conor Keegan pointing before Mullane showed brilliant poacher’s instinct to win a ball he shouldn’t have, beating three defenders before firing low to the corner.

Mullane would add three more points before the break, one from play, while Johnny Casey weighed in as well. Leitrim’s solitary response was a Conor Byrne free, struck from the halfway line, to leave Longford 2-13 to 0-6 in front.

Longford continue to dominate the early stages of the second half with points from Casey, Walsh and Mullane with only a Byrne free in response. But there didn’t appear to be any danger of a Leitrim fightback - even when Clement Cunniffe goaled on 12 minutes.

A long delivery brought a great catch from Cunniffe but the veteran Leitrim player may have got away with quite a lot of steps before expertly firing low to the far corner.

It seemed nothing more than a consolation but two minutes later, Longford keeper Breen Elliott inexplicably spilled an easy catch and Conor Byrne was in quickly to force the ball over the line in a scramble.

Clement Cunniffe added a point but Longford looked to have steadied themselves with points from Walsh and Mullane midway through the half.

Conor Byrne and Conor Keegan swapped frees but even with ten minutes to go, there was nine points between the teams but four unanswered Byrne points, three from frees, suddenly left six between the teams as the game entered two minutes of added time.

Byrne tried to force a late free into the net but the shot was saved but the clearance was poor, sub Cathal O’Donovan from Templeogue sending a ball back towards the goal where David McGovern appeared to get a touch, despite being clearly in the square, to divert the ball to the net.

Longford appealed for the square ball decision but referee Sean Hynes waved away the protests as suddenly Leitrim had the chance to rescue the game, a fact that looked incredibly unlikely early in the second half of this contest.

But Longford steadied themselves and despite Leitrim huffing & puffing, the chance to level never came and Longford held on for the win.

Main Man
Newcomer Conor Byrne, not the Eslin footballer, was accuracy personified and a real threat while Karl McDermott, Padraig O'Donnell, David McGovern and Colm Moreton were best for a battling Leitrim.

Talking Point
Did Leitrim wake up or Longford go to sleep? Longford had a game last week while Leitrim didn't even have a friendly outing. It probably told in the first half as Longford were more than worth their big lead.

Turning Point
A heavy bang on Longford's Cathal Mullane seemed to wake up the Longford man as he drove Longford to score two goals in three minutes, creating one and scoring the second.

Ref Watch
Sean Hynes didn't do a hell of a lot wrong, maybe a little slow in indicating decisions. Could have pulled Clement Cunniffe for steps in his goal, should have pulled for a square ball for Leitrim's third.

Highlight
Leitrim's fightback was encouraging as they kept plugging away, kept battling even when they trailed by nine points with ten minutes of normal time left. Certainly something to build on.

Lowlight
Easy - the period of the game when Longford scored 2-9 with only a solitary Leitrim point in response, a devastating 15 minute spell that won Longford the game.