Leitrim leave it late but emerge with deserved victory 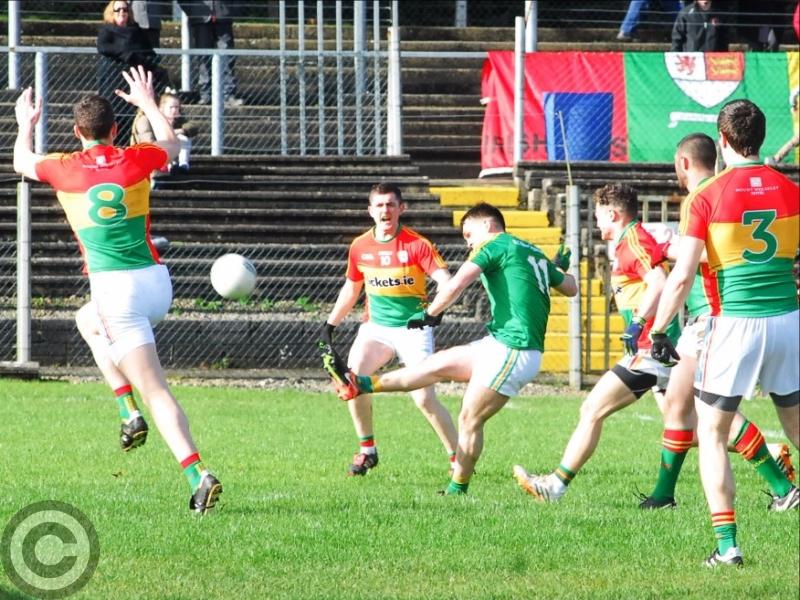 Having almost lost a game they were in control of, Leitrim footballers demonstrated serious character to eek out a deserved Allianz League Division 4 victory over Carlow on Sunday in Pairc Sean Mac Diarmada.

In a bizarre game that saw Leitrim miss three goal chances in the first half and hit nine wides, the Green & Gold were left hanging on for a victory that was thoroughly merited but could just as easily have been snatched from their grasp.

Leitrim led by seven points with 15 minutes to go but two goals in five minutes suddenly threw a comfortable Leitrim for a loop as Carlow, for so long second best to a focussed and energetic home, almost snatched an unlikely and undeserved victory.

But perhaps in the long term, the manner of how they grasped victory from the jaws of terrible calamity will serve Brendan Guckian’s side best of all for they will have gained tremendous confidence of being able stare defeat in the face and react with two injury time points to seal a famous victory.

Gary Plunkett took a lot of plaudits with two fantastic finishes for both of Leitrim’s goals but there were plenty of other heroes with Brendan Flynn making one vital save, Donal Wrynn again impressing at centre-back while Wayne McKeon, Damien Moran, Nevin O’Donnell, Shane Moran and James Rooney all impressed.

But for the curse of poor finishing, this would have been a much more comfortable win that it worked out and should give Leitrim a good deal of confidence ahead of the trip to Newcastlewest for the Limerick game on Sunday, March 19.

Leitrim started in blistering fashion but wasted two chances of at least shots at goal when Mark Plunkett lost possession of the ball after good work from Nevin O’Donnell and Emlyn Mulligan put him through while seconds later, Ronan Kennedy’s ball in found Damian Moran but his shot was saved.

From the resulting 45, Carlow looked to have cleared the danger but lost the ball and Gary Plunkett pounced for a neatly taken point. Emlyn Mulligan put a free wide before Darragh Foley scored a wonderful free from out near the sideline.

Emlyn Mulligan finished off a good move with a sixth minute point but with both teams missing good chances and Gary Plunkett earned a yellow for a late hit on Brendan Murphy, it was another missed chance that frustrated Leitrim when Damian Moran blasted low and hard but also wide of the posts.

Mark Plunkett scored from distance to stretch the lead to two points but Eoghan Ruth scored a well worked point to keep Carlow in touch on 14 minutes.

Leitrim had another great chance of a goal when Wayne McKeon pulled off another of his typical side-steps but after rounding the keeper, his shot was blocked by a defender and Carlow fought back with points from Danny Moran and Darragh Foley to level the scores after 18 minutes.

Carlow keeper Craig Kearney inexplicably lost possession and touched the ball on the ground, Emlyn Mulligan converting the free but Leitrim had a let-off when Darragh Foley’s high ball was brilliantly caught by Ciaran Moran.

The Carlow full-forward definitely appeared to be fouled but got his shot away, the shot blocked out for a fifty which was converted by Paul Broderick.

With Leitrim continuing to hit bad wides, nine in the first half, Carlow went in front with a well worked Alan Foley score but an injury time point from Emlyn Mulligan free left the sides level at 0-6 apiece at the break.

The half did end with some controversy when Carlow officials loudly protested a decision not to book Emlyn Mulligan for a second time after a clash with Danny Moran out on the sideline, the Carlow player complaining that he had been stood out but referee Liam Devaney took no action.

The Mayo official did take action after the break when he sent the Carlow maor foirne Stephen Poacher to the stands and indeed, Carlow felt the ire of the match official early in the second half with two black cards for Johnny Murphy and Conor Lawler. The one for Murphy harsh as his battle with Alan Armstrong seemed to be six of one and half a dozen of the other.

Carlow had gone in front with a Gary Kelly point but Mulligan converted a free before Nevin O’Donnell penalised a Carlow defender playing the ball on the ground with a fifth minute free.

Carlow should have goaled when a quick Shane Redmond free found Ciaran Moran charging through on goal but Brendan Flynn made a wonderful save, tipping the ball over the bar.

The value of that save was doubled just a minute later when Leitrim pounced on a poor kickout, Wayne McKeon’s racking long ball found Gary Plunkett in behind his man and a sumptuous finish saw him blast the ball to the far top corner.

Darragh Foley pulled back a free for Carlow after a yellow card for Wayne McKeon but McKeon played his part at the other end, winning a soft enough free that was converted by Mulligan.

And the game seemed over on 15 minutes when Damian Moran gathered a long ball and sent a crossfield pass towards an inrushing Gary Plunkett. Carlow’s Kieran Nolan seemed to have the ball under control but he only palmed it into Plunkett’s path and the Aughawillan man showed brilliant finishing instincts to round the keeper and bury the ball in the net.

Ronan Kennedy soon stretched the lead to seven points but Carlow fought back with points from sub Sean Gannon and Foley (free) while Foley, now in at full-forward, came close to a goal when he fisted Brendan Murphy’s long delivery over the bar under pressure from Flynn and Armstrong.

Ronan Kennedy pulled back a point but the game was right back in the melting pot with ten minutes to go when Danny Moran created an overlap on the left wing, played a one-two with Shane Redmond and drilled a low shot below Brendan Flynn into the far corner.

That left two points between the teams but Leitrim sub Brendan Gallagher fired over a lovely on the run to open up a three point gap.

Now it was Carlow’s turn to miss chances as Murphy and Foley missed good chances but they dramatically levelled the game from the penalty spot when Matthew Murphy grabbed Brendan Murphy from behind after he fielded a high ball and turned to shoot from close range.

Ciaran Moran tucked the penalty home and suddenly a game that looked a banker for Leitrim ten minutes previously was now level.

Carlow had a chance to go in front but Darragh Foley put the free wide and Leitrim made them pay, a silly push on Emlyn Mulligan led to a successful free for the Kinlough man in added time before a well worked move ended with Brendan Gallagher firing over a brilliant point.

Carlow kept trying to get back into the game with the Barrowsiders bitterly contesting an over-carrying decision against them when the ball was lobbed into the Leitrim goalmouth, referee Liam Devaney on the end of some quite strong and prolonged protests after the final whistle

SEE NEXT WEEK’S LEITRIM OBSERVER FOR FULL REACTION AND ANALYSIS.