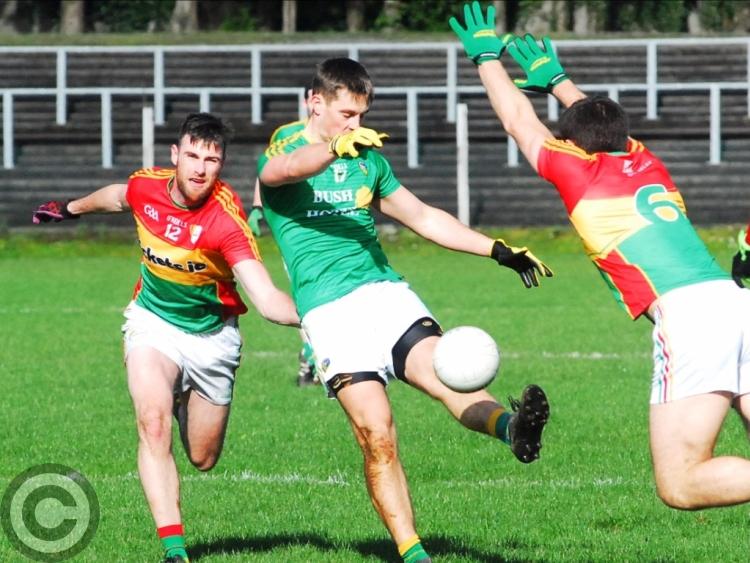 Shane Moran gets his shot away despite the attention of two Carlow defenders. Photo by Willie Donnellan

It wasn't good for the heart but in the long term, victory over Carlow and the way it was achieved may just be the first signs of a new found Leitrim confidence.

It is dangerous to read too much into League games but Leitrim's confidence can only be helped by the way they reacted to crisis in the final stages to earn a well deserved second Allianz League Division 4 victory last Sunday in Pairc Sean Mac Diarmada.

That crisis was largely self-made as a seven point lead evaporated in the blink of an eye after a wasteful Leitrim had missed enough chances in the first half to be home and hosed long before the final whistle.

Carlow, out of nothing, fashioned two goals that tied the game as  the Noresiders looked more likely to push on for victory, it was then we saw the changes in this Leitrim team as they reacted to fire over two points to secure a well deserved win.

It was this reaction in added time  that bodes well for the future and allied with the energy and enthusiasm displayed throughout the game, Leitrim look as if they are building something at least more competitive in this Division.

Promotion may be a tad too far this year with the way Wexford and Westmeath are playing but with so many young players in the squad, Leitrim look like a team who can legitimately being to dream again.

Yet strangely, it wasn’t the “youngsters” who carried the day against Carlow - Gary Plunkett may be in his first year with the Senior team but it is easy to forget that he is not one of the U21 contingent.

It was Plunkett’s two goals and impressive workrate that made a big difference last Sunday against Carlow - the two three-pointers proving the difference in a game where Leitrim were again hampered by poor finishing.

Donal Wrynn lead the defence impressively, Wayne McKeon is tailored made to the free-man in defence role while Shane Moran, Nevin O’Donnell, Damian Moran and Emlyn Mulligan all made strong contributions to the victory.

What let Leitrim down was their finishing and you could see as the wides piled up so did the pressure on the shooters and it told. It is what made Leitrim’s two points in added time all the more impressive.

Brendan Gallagher, dropped to the bench, probably did enough to regain his starting place with two vital points in the second half while Brendan Flynn, who replaced Philip Farrelly in goals, made one vital save just after halftime that proved crucial.

Yet it was a game that was so nearly lost and again illustrates where Leitrim need to work - poor finishing left the door open for Carlow and they exploited a lot of hesitancy in the defence to work two goals and the concession of 2-12 hints at a team perhaps better suited to going forward than stopping teams.

What will please Brendan Guckian was the character shown by his team and that has to be the major plus for the county going forward. Nationally, this victory mightn’t rank high but it might mean an awful lot to Leitrim in the long run.

The first half was tit for tat with the sides level at 0-4 apiece at the end of the first quarter, Gary Plunkett, Emlyn Mulligan, Mark Plunkett and Nevin O’Donnell on target for Leitrim while Carlow responded through Darragh Foley (2), Eoghan Ruth and Danny Moran.

Carlow should have had a goal but Ciaran Moran saw his shot deflected wide and the visitors took the lead before halftime with points from Paul Broderick and Alan Kelly but another Mulligan free tied the scores before halftime.

An incensed Carlow felt that Mulligan, already booked, should have been sent off for a challenge out near the endline and their maor foirne was sent to the sands. Their discipline went in the second half with two black cards in the first six minutes of the second half.

The turning point came just then - Brendan Flynn tipped a goal-bound shot over the bar and a minute later, Gary Plunkett produced a sublime finish for Leitrim’s first goal.

A second Plunkett goal, brilliantly set up by Damian Moran, put Leitrim seven points clear with 15 minutes to go but then Carlow started an unlikely comeback with three quick points before wing-back Danny Moran played a brilliant one-two to work his way through the Leitrim defence for a crucial goal with ten minutes left.

That left the nerves jangling, something that went into overdrive when Brendan Murphy was hauled down for a penalty that saw Mattie Murphy black carded, the kick expertly dispatched by Ciaran Moran to tie the scores.

With five minutes left, the game was up for grabs but it was Leitrim who held their composure best and Emlyn Mulligan fired over a huge free before sub Brendan Gallagher ensured a well deserved victory with a point after a quick thinking and quick moving exchange of passes.

Main Man: Not much doubt about this - Gary Plunkett had an outstanding game, his two goals key in Leitrim's victory but his general workrate was outstanding. Wayne McKeon, Brendan Flynn, Shane Moran, Nevin O'Donnell and Damian Moran all stood out for the Green & Gold.

Talking Point: Leitrim fans left Pairc Sean relieved but they would have been tearing their hair out had the Green & Gold lost this one, particularly with some fierce bad finishing in the first half.

Turning Point: Gary Plunkett's first goal was absolutely huge as it gave Leitrim breathing room in a game that had been score for score up to that. Equally, Brendan Gallagher got a huge point straight after Carlow's first goal was massive.

Ref Watch: Carlow lambasted referee Liam Devaney at the final whistle and it's fair to say that while he consistently applied the rules, two black cards for Carlow early in the second half certainly halted their momentum.

Highlight: Leitrim's workrate and enthusiasm and they way they pushed up the field on Carlow was the key to this victory, it gave Leitrim a platform and they took it in style.

Lowlight: Finishing - it has long been Leitrim's achilles heel and it almost proved the same against last Sunday, some awful misses almost very costly.

See www.leitrimobserver.ie for in-depth score by score report from Sunday's victory over Carlow.