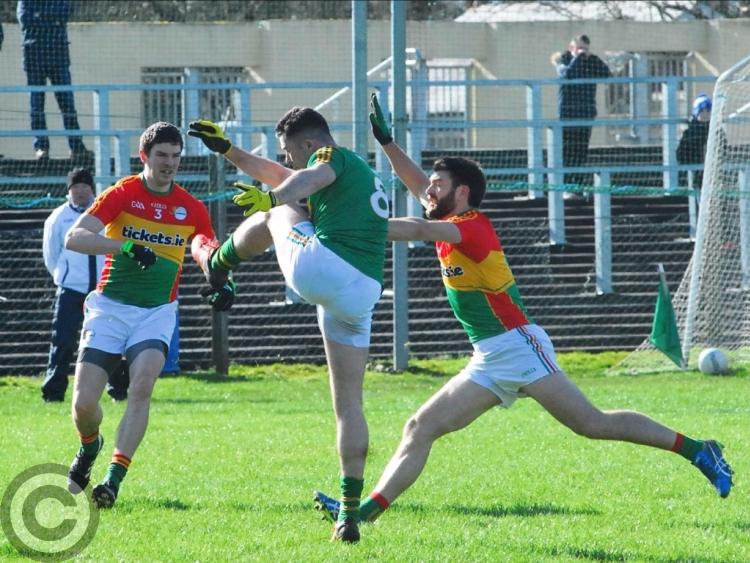 Nevin O'Donnell gets his shot away despite an attempted block from two defenders. Photo by Willie Donnellan

The Allianz football leagues have proven the maxim that water finds its own level. It has taken a number of years but each division now offers every team competing in it the opportunity to set realistic goals that can be viewed as achievable and reflective of growth and progress.

For the majority of teams in any given division, promotion and an appearance in Croke Park is within their capacity. Division 1 usually carries two teams for whom retaining division one status, rather than winning the thing, is the goal they set.

Unfortunately, I don’t see Leitrim contesting the Division 4 final in Croke Park on April 8. We are treading water in the middle of the division and that I believe is reflective of our level at the moment.

Sunday’s welcome win over Carlow shows that this is a squad with the potential to grow and develop.

We have the capacity to win all our remaining matches (featuring Waterford and London at home as well as our trip to Limerick) but Wexford and Westmeath’s concluding games should see them contest the silverware and win the right to compete in division three next year. Watch out for back to back promotions for Wexford in 2018.

I will be disappointed if we don’t’ finish third, and it is vital that we produce our biggest performance of the year against Limerick on Sunday, March 19. It won’t be an easy game. Limerick have been poor, recording just one win to date over London.

But the flip side of the inconsistent nature of teams that fail to fire on all cylinders in division four means they can pull a fine performance out of nowhere.

We are as good as any team in the division – on our day. But it is achieving a level of consistency every day you take to the field that forges winning habits.

The Limerick game offers this Leitrim team the opportunity to put two performances and results back-to-back – something they haven’t yet done in 2017.

That would in turn offer some invaluable momentum to take into our last two encounters (London and Waterford, both at home). We need to have a competitive edge to our last two games even if promotion remains only an outside mathematical possibility.

We have an onus to push Wexford and Westmeath all the way and hope they slip-up.

Every new set-up needs games that matter and test the players’ mettle. It needs performances that demonstrate that the system works and is worth buying into.

And hopefully those performances will eventually provide some momentum through positive results. Momentum is like oxygen to a team.

Outside the camp we need to show patience even if the above scenarios don’t come about as quickly as we would like to see them. This is a brand new team with a few familiar faces thrown in. Two of the key building blocks of performance are consistency and conditioning. Both of those, and the latter in particular, take time to mould. Years even.

Thankfully, as evident on Sunday, some of the other building blocks necessary for a solid foundation seem to be taking shape – including hunger, competitiveness, team cohesion, integrating new talent with experience, and, of course, skill.

Rome wasn’t built in a day and patience (Patienta) was one of the virtue’s that members of the republic were expected to uphold. They eventually built one of the greatest empire the world has ever known. I’d settle for that.