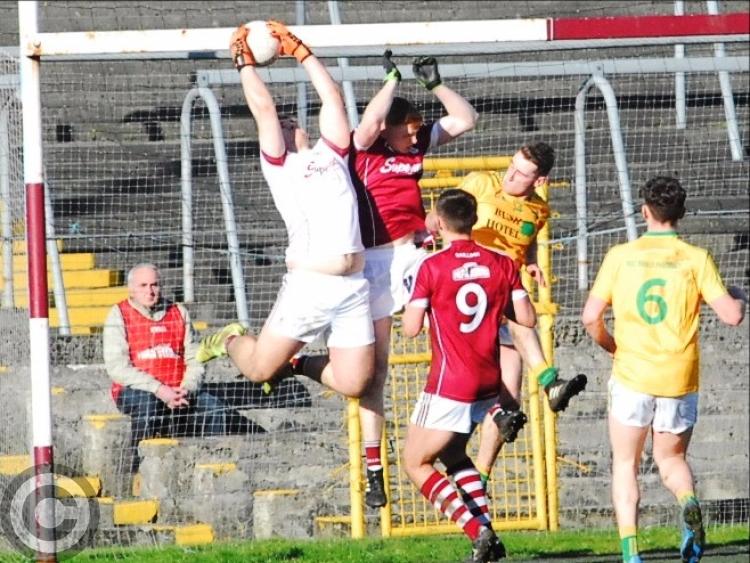 Galway keeper Ronan O Beolain makes a vital catch under his own crossbar with Keith Beirne trying to pressure him. Photo by Willie Donnellan

Days later, it is hard to make sense of what happened last Saturday in St. Jarlath’s Stadium in Tuam as Leitrim exited the U21 Championship in truly bizarre circumstances.

Bizarre is as good a word as any to describe a first half that saw the Green & Gold torn apart in every sector of the field by a rampant Galway who could, and should, have added much more to their 4-8 to 0-2 halftime lead.

Bizarre  describes Leitrim’s transformation in an incredible second half as they put Galway to the pin of their collars, reducing an 18 point lead down to a heartbreaking four at the final whistle.

For many years, I’ve written “what if” about Leitrim performances - what if this had happened, what if so-and-so had scored but this game counts as the most frustrating and bewildering ever produced by a Leitrim team.

It is not that Leitrim threw away the game, it was that they threw away the chance to compete against a very good Galway team - who knows if Leitrim might have beaten Galway if they had performed in any way at all during the first half but they never gave themselves the chance to win.

As much as we will rightly praise the second half display, the game was as good as over at halftime. It was only when there was nothing to lose that Leitrim showed what they are capable of and I'm sure Galway fans will argue just as passionately that they didn't perform in the second half either, rather than Leitrim doing anything.

That is what is most frustrating - this is a good Leitrim team but the first half performance torpedoed any hope of winning this game.

Galway established such a preposterous lead at the break that they could afford to sit back and allow a Leitrim team with a man advantage to rack up scores. And, apart from long balls, Leitrim never threatened to get goals in the same way the Tribesmen did in the first half.

Leitrim didn't help themselves in that first half and the kickouts of Jack Burke came in for a lot of criticism  - and there were some bad ones. But equally, there were too many Leitrim players out the field who simply never competed in any manner at all for the ball and if the kickouts weren't all they could have been, neither were the attempts to win possession out the field.

The second half was a different story and that is what hurts and frustrates most of all! How could a team that seemed so inept be transformed so drastically, a question Galway fans were asking of their team in the second half.

This is not kicking a team when they are down but for a Leitrim team with this potential and justified expectations, the Jekyll & Hyde performance can only be regarded as a horror show, no matter how much we rightly praise the heart & determination displayed in the second half.

A lively Ryan O’Rourke got Leitrim off to a good start with a point in the first minute but tragedy struck the Fenagh man when he badly injured his hamstring and was forced from the action after just five minutes.

Dessie Conneelly and Paul Mannion added points before Brady and Eoin Finnerty sliced open the Leitrim defence to set up Conneelly for goal number two. Leitrim tried to hit back but Jack Heslin saw his shot saved and Galway would add four unanswered points from Brady, Mannion, Peter Cooke and an outrageous point from a sideline from Michael Daly.

Leitrim scored their second point through Robbie Cunningham, set up by a Jack Heslin run but Galway suffered a blow when  wing-back Kieran Molloy was sent off on a harsh enough second yellow card.

Galway led 4-8 to 0-2 at a very subdued break but Leitrim obviously got an eating at halftime as they came out a different team, Pearce Dolan pointing from the corner after just 35 seconds.

Keith Beirne (free) and Mark Plunkett fired over before the Galway keeper made a great save from Pearce Dolan, Beirne putting over a free after the keeper picked the ball up off the ground.

Leitrim needed a goal and it came on eight minutes when Beirne beat his man and fisted the ball across the goal. The ball was met by Robbie Cunningham, the keeper saved  but Dean McGovern forced the ball home in a scramble.

Jack Heslin &  Beirne (free) reduced the gap to nine points before Mark Plunkett hit a long range shot from outside the 50 over the bar. The scores weren’t coming fast enough but the Green & Gold challenge got a huge boost when Conor Cullen’s high ball was flicked to the net by Keith Beirne with ten minutes left.

Beirne saw a free come off the post but Jack Heslin pointed after a quick free left him in acres of space.

But Galway’s sub Colm Brennan made a huge impact, winning possession time and time again around the middle of the field and the Galway men broke for two crucial points from Conneelly and Mannion.

They should have had a fifth goal when sub Michael Boyle appeared to be clearly fouled in the act of shooting as the game ticked towards 60 minutes.

Leitrim hit back with points from Conor Cullen and Beirne (free) but Leitrim’s attempts to rescue the game in six minutes of added time were frustrated as keeper Ronan O’Beolain and Michael Daly made a series of great catches in their own square under huge pressure to seal victory.

Main Man: Nobody, apart from Keith Keegan and Jack Heslin, stood out in the first half. In the second, it was a different story. But for consistency over the entire match, hard to beat Galway's Dessie Conneelly, Sean Andy O'Ceallaigh or Michael Daly who came up big for Galway when the pressure was on.

Talking Point: Did expectations get to this Leitrim team? It is a legitimate question considering what happened three years ago to many of the same players in the Minor Championship - can this talented bunch deliver when they are expected to?

Turning Point: In a match that had so many twists and turns, it is hard to pinpoint just one. But if pushed, I'd go for Keith Keegan's dismissal early in the second half. It allowed a rattled Galway to settle and wiped out the man advantage Leitrim were using so effectively.

Ref Watch: Paddy Neilan didn't do a hell of a lot wrong, kept up with play and made the right calls on a lot of the cards, good job from the Roscommon official.

Highlight: The second half fightback was uplifting, the attitude displayed by these young players inspiring.

Lowlight: The entire first half - it is impossible to describe just how bad it was from a Leitrim point of view, a truly awful display that left the Leitrim fans stunned and silent.