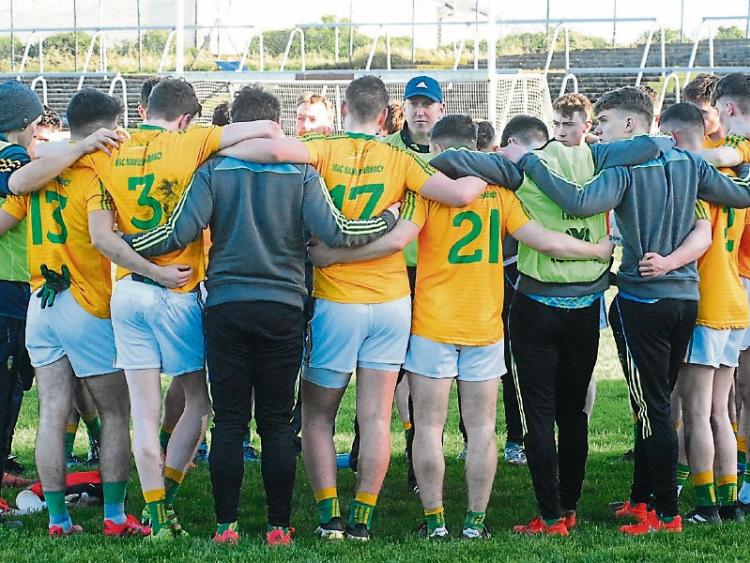 Manager Brendan Guckian addresses the members of the Leitrim U21 Championship match after their four point loss to Galway recently. Photo by Willie Donnellan

Is tús maith leath an cath. I’ve always been a great believer in this adage. Unfortunately, too many Leitrim teams have been learning this the hard way in recent years.

The horrendous start by our talented U21 team against Galway left them with an unmerciful hill to climb. To their credit they never gave up, and I respect any player that keeps going in the face of adversity.

But I never read too much into massive comes-backs in terms of a final score unless a team manages to overcome the deficit and win the game. It’s impossible to quantify how a team leading by 18 points, as Galway did at one stage, relax mentally and, thus, physically too.

You can’t determine how much Leitrim’s comeback to within four points was down to a massive improvement in their play versus a considerable decrease in the opposition’s.

There is also the underdog mindset to consider.

When the underdog finds himself in a hopeless place, with nothing – not pride, not ridicule, not a result – to lose, he will throw caution to the wind and forget about respecting the opposition too much or the fear of failure and will attack the game like there is no tomorrow.

Ninety nine times out of a hundred the epic comeback falls just short enough to steal a famous victory, but comes just close enough for them, and their supporters, to tell themselves ‘on our day we could have beaten them’.

Woulda, coulda, shoulda must be taken out of the vocabulary of all serious sports people.

There is only one day – the day that you take to the field.

The last performance matters none and the what might have been is a parallel universe that none of us inhabit. The challenge for the underdog is to shake of such shackles at the start of a game and play without fear from the offset. I don’t mean just commit everything to all-out attack.

On the contrary, I often find a measured approach gains more traction. You must certainly match the fire that the favourites will inevitably bring. In the tackle, in the race to every ball, in every collision. The underdog must have more hunger.

If you haven’t eaten at the winning table for decades while your opposition gorges themselves at it every other year, what hunger you must have deep down compared to them? If you can tap into that hunger – as Leitrim did in 1994 – it can become a powerful force.

But while the heart is filled with fire, the head must be placed on ice. The favourite’s tactics rarely changes: blow the underdogs out of the water early and watch them crumble. You must ensure that you remain in the game at all costs and decision making is crucial to this.

It’s not an easy thing to do and we see teams struggle with this dynamic at the very upper echelons of Irish sport.

Take the Irish rugby team. They are at their best when their backs are to the wall and usually cough up their worst performances (see this year’s Scottish and Welsh matches) when they are coming into a game with expectations or as favourites.

Being an underdog is part of the Irish psyche. We love to see the big man built up only to be chopped down to size again (John McGahern was a master at exploring this dynamic in his writing.)

Behind the sporting term underdog’ there is an inferiority complex at play and shifting that paradigm requires deep self-reflection.

Tackling the pattern in a team dynamic is an even more challenging undertaking as it requires simultaneous group reflection and a collective consensus that things must change, and how this must be achieved. And few outside Buddhist temples are adept at this!

But it can be worked upon. It is part of the culture of a team and we know that cultures can be changed, but such change takes a lot of time and then effort to embed the new mindset.

There is a time to tap into the underdog mindset and use it to your advantage too; we don’t want to throw the baby out with the bathwater. Ireland’s win over England at the weekend was predicated on our refusal to let them dictate the terms of battle to us in our own backyard.

We circled the wagons and realised that – as underdogs – we needed to bring something special to the table. Preventing England from winning back to back Grand Slams and achieving a world record 19th consecutive win was perhaps a bigger motivator for many people on this island than Ireland winning the game. Things were set up perfectly for Ireland to spoil the party.

But in the bigger picture of the of the Six Nations, it was too little too late for Ireland. While we sit slapping ourselves on our backs. England sail back over the Irish Sea with the silverware stowed carefully below deck. We might have won the battle but we lost the war.