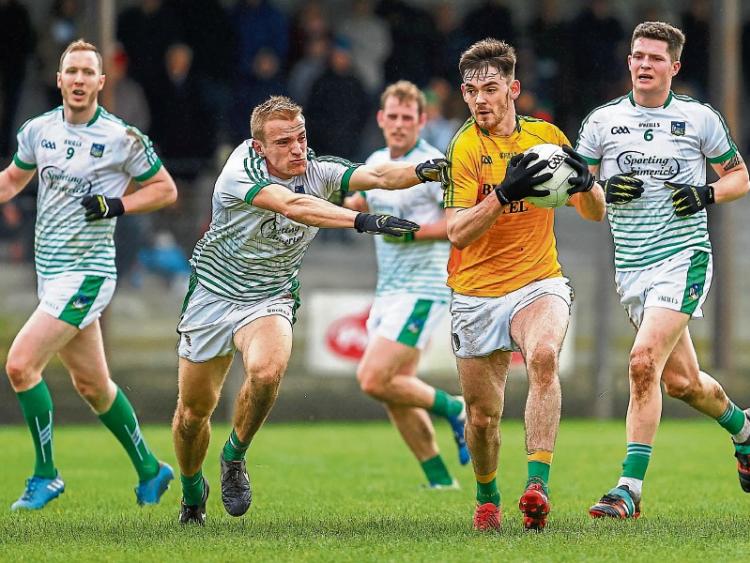 The dream of promotion for Leitrim was officially killed off last Sunday in Newcastlewest as two Limerick goals ultimately proved the difference in a hard fought Allianz League Division 4 encounter.

A goal in either half helped Billy Lee’s Limerick to build on the London win of the previous round to ensure successive league wins for Limerick for the first time since April 2015 when Clare and Louth were defeated.

Coupled with Wexford’s five point win over London and Westmeath’s 0-19 to 0-14 victory over Wicklow in Mullingar, the door was firmly shut on Leitrim’s admittedly slim hopes of getting back in the promotion battle.

Wexford will be playing their League football in Division 3 next year while Westmeath are nearly certain to join them, needing just one more point to be certain of promotion with games against London and Wexford to come.

Leitrim needed a win in Newcastlewest and either of the top two dropping points but when the Green & Gold were unable to deliver the win, it all became moot and focus will now turn to London, both in terms of League and Championship.

Brendan Guckian’s team will host the Exiles next Sunday at the earlier than normal throw-in time of 1 pm, determined to lay down a marker for the Summer’s Connacht Championship meeting against London in Ruislip.

The Exiles have been forced to play all of their League games away from home this year due to the construction work at Emerald Park in Ruislip but they have delivered a series of impressive performances, pushing a lot of good teams to the wire despite not enjoying home advantage.

Leitrim will be anxious to lay down a marker for the Championship and with the League and the U21 Championship now consigned to the history books, the focus will surely be finishing the campaign strongly as players attempt to earn their place on the championship team.

Leitrim showed a few positional switches in Newcastlewest with Wayne McKeon and James Rooney swapping roles in attack and defence, although both effectively performed the same role as an extra man in defence.

Pearce Dolan was an early sub, replacing Shane Moran after just 25 minutes, while he was joined by Brendan Gallagher, fellow U21s Keith Beirne and Conor Gaffney midway through the half as Noel Plunkett replaced the injured Oisin Madden late on.

Limerick were backed by the strong breeze in the first half as they led 1-8 to 0-5 at the halftime interval and while the Green & Gold outscored the home side 0-10 to 1-3 in the second half, the Treaty men held on for a two point win.

Two fine points from Danny Neville helped Limerick to a 0-4 to 0-2 lead after 15 minutes, albeit Nevin O’Donnell did go close to an early Leitrim goal.

Emlyn Mulligan opened the Leitrim account from a free on nine minutes but that was as good as it got for the Connacht side in the opening half in which they relied heavily on Mulligan and O’Donnell frees.

O’Donnell’s free was added to by a fine Wayne McKeon point from play but Limerick’s Iain Corbett matched Danny Neville’s two points from play and the lead was out to 0-7 to 0-3 with 23 minutes played.

Ten minutes from the break came the crucial score when Limerick goaled. Cian Sheehan was fouled for a penalty by Oisin Madden and Iain Corbett goaled but not without a brilliant penalty save from Brendan Flynn; unfortunately Corbett reacted quickest and crashed the rebound to the Leitrim net.

Limerick found just one score in the final 10 minutes of the half with Ger Collins scoring from play to add to his three earlier pointed frees, a score matched by Nevin O’Donnell as the halftime score stood at 1-8 to 0-5.

Given the strength of the wind, Leitrim would have been relatively happy with that scoreline and that optimism seemed justified as Brendan Guckian’s team scored seven of the first eight scores in the second half.

Frees from O’Donnell and Mulligan (2) cut the six point gap in half within 12 minutes of the restart and Leitrim looked in a great position but crucially, Limerick’s only score of this period arrived on 13 minutes and it proved a game winner - Limerick's Darragh Treacy finding the net after some fine work by James Naughton.

Leitrim showed admirable spirit as they wiped out the goal within seven minutes thanks to two points from sub Ronan Kennedy and another Mulligan free and it seemed as if momentum was firmly with the visitors when Limerick were reduced to 14-men after Cian Sheehan was sent off for a yellow card followed by a black card.

And it did seem as if Leitrim would get their third win of the campaign as almost immediately after the dismissal, Kennedy added another point and sub Brendan Gallagher kicked another from play to leave the gap at just a point with seven minutes to play but Limerick struck back effectively.

Breaking forward at pace, Limerick won two scoreable frees and sub Sean McSweeney came up trumps with key points to push out the lead to three points and despite another point from Gallagher, that was as close at it got.