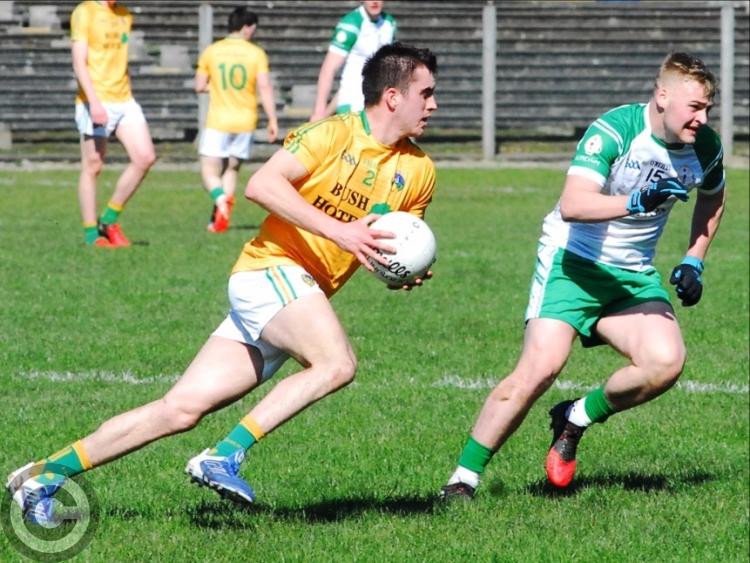 Job done and done with something to spare but we’ve become a demanding lot in Leitrim as a seven point win over London left fans vaguely dissatisfied last Sunday in Pairc Sean Mac Diarmada.

A seven point win over the Exiles accomplished two tasks for the Green & Gold - a third League win for Brendan Guckian’s team and an important marker for this Summer’s Connacht Championship clash with London in Ruislip.

Leitrim racked up a League high of 2-16, 1-10 from play and displayed some great movement and attacking instincts in a game that should have carried a little bit of an edge given that they are meeting in the championship in less that nine weeks time.

But in many ways, Sunday’s game was something of a “phoney war”, a tame dress rehearsal as you got the definite feeling that both teams were intent on not showing their full hand, not revealing what they are fully capable of.

Nobody leaving Pairc Sean was overly satisfied as a late London rally of six unanswered points took the gloss off what had been an impressive, if somewhat routine, victory up to that point.

In fairness, it was a feeling quite obviously shared by Leitrim’s management team as the sense of a team taking their foot off the pedal far too much in the closing stages was hard to escape.

Just like Galway playing Leitrim recently in the U21 Championship, maintaining your concentration when you are so far ahead can be an impossibility and Leitrim discovered as much last Sunday, the second half showing dropping off considerably from the first half showing.

And while London certainly looked dangerous in the closing 15 minutes, there was never a sense that Leitrim were in any danger.

Up to that, Leitrim had done so many things well - they tackled aggressively, they worked hard, created space and overlaps and took their scores with real style and Emlyn Mulligan gave a great display of place-kicking, scoring 1-6 from placed balls.

Ronan Kennedy, Keith Beirne and Brendan Gallagher profited from acres of space afforded to them in the London rearguard but it is unlikely they will get the same room or  meet the same lack of aggression when they face London again in Ruislip in May.

London performed in much the same way Roscommon did against Dublin last Saturday night - they played the game almost like a challenge, putting in a lot of effort but it was an effort that lacked intensity in the tackle or even aggression or a little bit of thickness!

Yet those struggles may be, in the long term, the best thing for this young Leitrim team - they need no warnings now about the potential danger of this London team, a team minus four first choice players and who gave a lot of squad players a run-out.

Liam Gavaghan and Killian Butler, two London-born players, stood out in attack as good ball winners and players with an eye for a score so maybe something was learned for the championship after all as both will have to be watched.

London will have learned that if you give Leitrim any sort of room, they will do damage and there is a lot of pace in the team and a lot of enthusiasm in the Leitrim tackle.

Pearce Dolan had some bright moments in midfield, Brendan Gallagher was tireless offering himself as a target man and Emlyn Mulligan gave an exhibition of place-kicking. In defence, Paddy Maguire was rock solid but 15 points for London is a return that will not please the defence as a unit.

Brendan Guckian's team will look to finish the League off with a fourth win as they take on Waterford next Saturday at 4.30 in Pairc Sean Mac Diarmada, looking for a fourth win of the campaign.

Keith Beirne opened the scoring for Leitrim after just three minutes and for the first 20 minutes, Leitrim were hitting two points to every one London managed as Ronan Kennedy, Emlyn Mulligan, Beirne and Brendan Gallagher were all on the mark.

James Rooney's goal, a glorious finish with some great footwork, more or less killed off the game on 19 minutes but a second goal, this time from the penalty spot when Mulligan fired home after a foul on Beirne, ensured the victory.

The second half was tit for tat with Leitrim matching everything London threw at them in the first 20 minutes as Wayne McKeon, Kennedy, Mulligan and Beirne were all on target as all intensity or intent went out of the game.

London, however, weren't finished and six points in the last 12 minutes suddenly reduced a comfortable 13 point lead almost in half. And Killian Butler had a goal chance into the bargain as well.

Main Man: A lot of solid performances all around for Leitrim but Emlyn Mulligan's place-kicking and general effectiveness around the field marked him out as the game's stand out performer.

Talking Point: How much bearing will this game have on the May 28, championship encounter is impossible to tell - did London hold back, trying to lull Leitrim into a false sense of security? Did Leitrim ease off when the game was well won, much as Galway did in the recent U21 championship match? All you can definitely say is this game will have absolutely no bearing on the championship game in Ruislip!

Turning Point: James Rooney's brilliantly taken goal after 19 minutes effectively finished the game as a contest, even at that early stage.

Ref Watch: Sligo's John Gilmartin didn't have a hell of a lot to do but what he had, he did well.

Highlight: Leitrim's purpose and attacking in the first half was impressive, some great scores from Ronan Kennedy and Brendan Gallagher the highlights.

Lowlight: The last 15 minutes will worry Leitrim fans and you could sense Brendan Guckian wasn’t happy with the way London were allowed back into the contest. It must also be a concern that London scored 15 points, 11 from play.