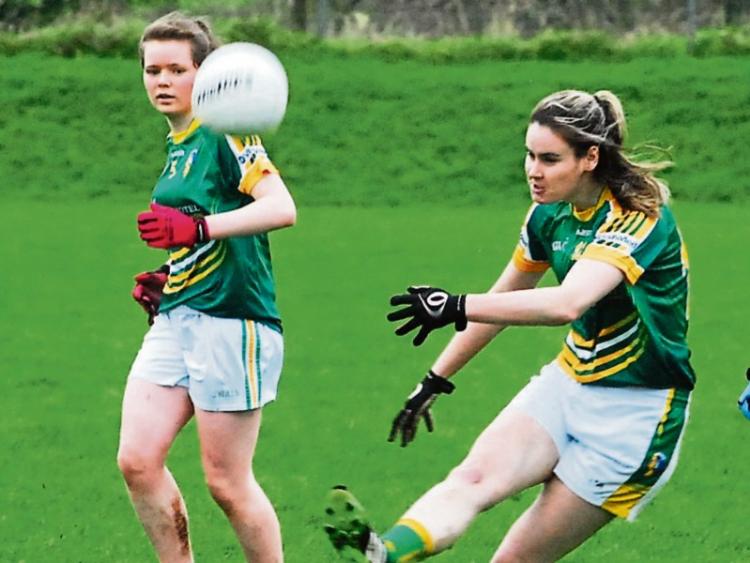 Roisin McHugh and Michelle Heslin were on the scoresheet for Leitrim

Leitrim’s faint hopes of reaching the Lidl Ladies Division 3 Semi-Finals were extinguished on Sunday when Tipperary proved too strong for the Green & Gold in Ardfinnan.

With Offaly beating Meath, the midlanders now stand three points ahead of Leitrim and even were they to lose their final game to a weak Down side, they would have the head to head result against Leitrim who take on Meath next Sunday.

Tipperary made the most of home advantage in a sun-drenched Ardfinnan and they opened with a goal straight from the throw-in, Orla O’Dwyer finding the net after Aishling Moloney’s ball from the throw-in was passed on by Caoimhe Condon.

The unbeaten Division leaders added a point from Aishling McCarthy but a Leitrim team without the attacking talents of Aine Tighe and Dearbhaile Beirne hit back in style as Carla Le Guen goaled after just seven minutes, Michelle Heslin following up with a point two minutes later.

But Tipperary weren’t long in hitting back and barely a minute later, they had found the net again, this time from Moloney. Again Leitrim displayed plenty of fighting spirit as Michelle Heslin, Roisin McHugh and Bronagh O’Rourke all scored good points to tie the scores once more.

After going ten minutes without a score, Tipperary ended their drought with two quick points from Aisling McCarthy and they added further points from Moloney, Gillian O’Brien and McCarthy (free) to stretch the lead to five points.

Roisin Fowley then traded scores with Mairead Morrissey and the home side finished the half with two more McCarthy frees to leave Tipperary 2-9 to 1-5 in front at the interval.

With Leitrim enjoying the wind in the second half, the Green & Gold must have been quietly pleased but Tipperary set about quickly putting the game beyond their reach as Morrissey added a second point.

Having been denied a goal by a fine Michelle Guckian save, Aishling Moloney made no mistake six minutes into the second half but again, Leitrim fought back as Michelle Heslin scored 1-1 in quick succession.

But just as they had in the first half, Tipperary responded with a goal of their own, Orla O’Dwyer becoming the third goal scorer for the Premier county.

For the following eight minutes neither team scored as the ball ebbed and flowed from end to end before Roisin Fowley ended the drought with two good points. Niamh Lonergan and Bronagh O’Rourke swapped points before Ailbhe Clancy and Carla Le Guen added one apiece to cut the gap to six points.

Moloney and Le Guen swapped scores but the final score fell to Tipperary, McCarthy putting over her sixth free as the home side prevailed by seven points.