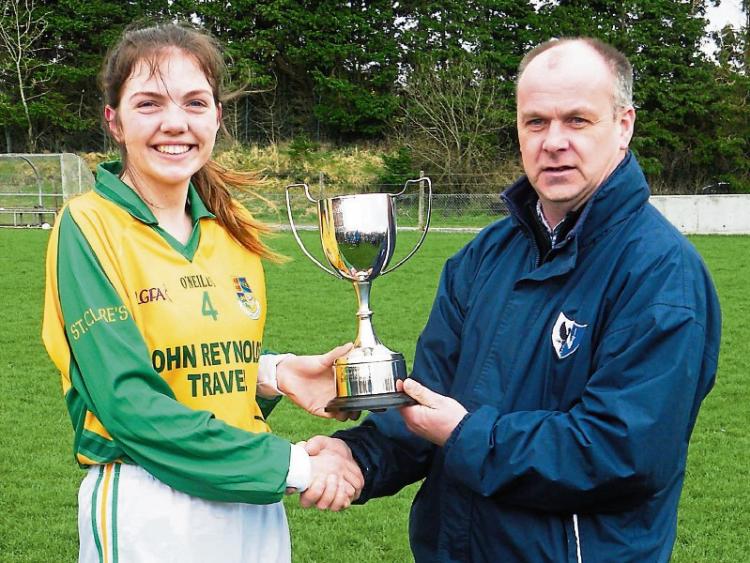 St. Clare's Manorhamilton made it a Connacht double in Swinford when a battling display saw them claim the Senior C Group 2 title in dramatic fashion last Thursday.

The north Leitrim school had won the Junior equivalent at the same venue a week before with an all-conquering display but this was a victory born of determination, resilience and spirit as St. Clare's recovered from a nine point gap to emerge victorious in a hard tackling and hard fought encounter.

It was good old fashioned spirit and determination that kept St. Clare's going when all seemed lost and their superior all round strength in depth eventually told the tale with sub Emma McLaughlin emerging the hero when she struck the decisive goal.

The Manor girls rode their luck at times during the first half with a few players lucky not to see yellow cards, something that would have given St. Enda's more room to exploit and build their lead.

But there was no doubting that St. Clare's were the better team as Colaiste Enda couldn't match the strength all around the field and immense work-rate and refusal to lose.

St. Clare’s were quick off the mark with a Muireann Devaney point after just 38 seconds and Leah Fox added another. But Colaiste Enda showed their danger when a great run from Ailbhe Davoren cut open the St. Clare’s defence to set up Katie Hall for a great goal after just three minutes.

Shauna Butler added a point from a free before Ailbhe Davoren went on another long run, perhaps getting away with over-carrying a few times, before she drilled the ball to the St. Clare’s net. Devaney saw a shot blocked with Enda’s breaking for Butler to point, her shot skimming the top of the crossbar.

There then came a controversial incident when Eadaoin Clancy clearly hauled Enda’s Kara McClean to the ground, lucky to avoid a yellow card. But the Colaiste Enda player kicked out as they were both on the ground, hitting Clancy and incredibly lucky not to get a red.

Muireann Devaney pointed after a typically good run but St. Clare’s were hit a blow when Shauna Butler was fouled on her way through, another St. Clare’s player lucky to avoid a yellow card, Butler putting away the resulting spot-kick.

Butler added a point on 18 minutes and if you had told anyone Colaiste Enda would only score one more point for the rest of the game, nobody would have believed you.

Crucially St. Clare’s started to push up the field as an entire unit and Enda’s couldn’t get out of their own half as Devaney (free), Dearbhla Rooney and Devaney fired over three points in less than two minutes.

St. Clare’s also had five wides in the final ten minutes, something that still must have given them a lot of heart as they started into the second half. But even with the wind and a first minute point from Leah Fox, St. Clare’s found it hard to breach the St. Enda’s defence.

St. Clare’s looked to have wasted another goal chance when Rooney saw a shot blocked but the ball broke to sub Emma McLaughlin who drilled a great shot to the net.

Colaiste Enda hit back with a good Butler point but St. Clare’s weren’t to be denied and McLaughlin and Devaney (free) fired over points in injury time to seal the victory.

Main Man: Lots of great performers here with three in particular standing out. Aoife Gilmartin, Ava Fowley and Dearbhla Rooney were the engine room of this triumph as they scrapped and drove their team on. Muireann Devaney & Leah Fox provided the scores but Dearbhla Rooney was undoubtedly the outstanding player on the field. Honourable mentions too for Eadaoin Clancy, Orlaith Kelly and super-sub Emma McLaughlin.

Talking Point: Ladies football in the Manorhamilton area is flying but St. Clare's should be operating at a much higher level given the talent at their disposal. And the challenge in the future must be to get these great young players to come through at adult level.

Turning Point: Three points before halftime were huge but Emma McLaughlin's goal finally got St. Clare's in front at a time when Enda's looked as if they might hold out.

Ref Watch; John E. Burke let a lot of pulling and dragging go and should have punished St. Clare's with some yellow cards and Colaiste Enda with a red for a player kicking out.

Highlight: Unlike the Junior Final cakewalk, this was a victory for St. Clare's resilience and spirit as they kept battering away at Colaiste Enda before eventually getting their just reward.

Lowlight: The first half must have worried the St. Clare's fans as Colaiste Enda ripped through their defence seemingly at will and should have been much further ahead than they were.