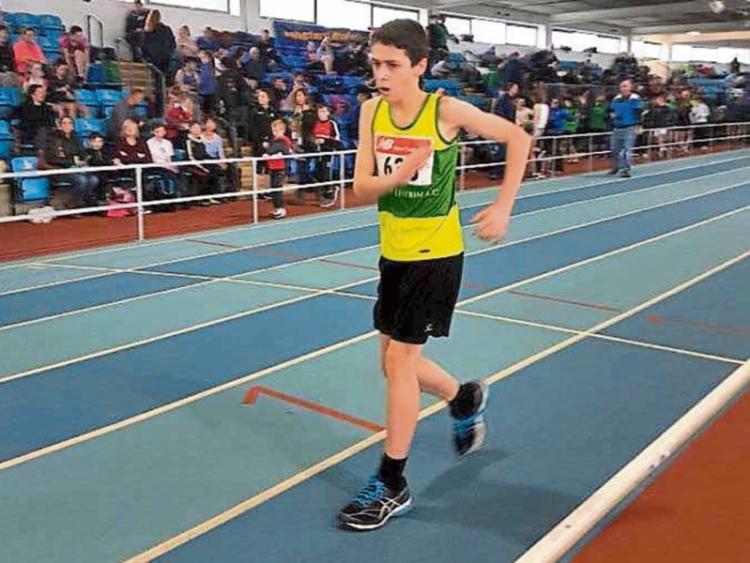 North Leitrim AC's Darragh Mitchell on his way to a bronze medal in the U15 walk in Athlone.

Carrick-on-Shannon AC saw Toyosi Fagbo, Alannah McGuinness and Gerard Murtagh all reach their 60m Finals while North Leitrim’s Shannon O’Hagan and Sarah Brady both finished in the top eight in their events.

Leitrim’s tradition in the race walk was continued when Darragh took home the bronze medal in the U15 event. With just four competitors in the event, the battle for medals was always going to be fierce as Matthew Lennon of Mullingar Harriers won the event.

Cork’s Ciaran Hurley was next across the line with Darragh less than seven seconds behind in a time of 5.25.97 to take the bronze medal, over 1 minute 40 seconds clear of fourth.

For Eoin Gaffey, the margins were a lot closer as the Mohill & District AC walker finished fourth in a time of 7.23.20, just 3.08 seconds behind long time rival Ryan Roberts of Sligo. Just four walkers finished but the line-up was top quality with the silver medal less than seven seconds ahead of Eoin.

Sarah Brady finished eighth in the U15 Girls walk in her first year in the event in a time of 5.38.42. The North Leitrim walker had been contending for a medal before receiving a warning that unsettled her.

Carrick AC’s Toyosi Fagbo was the next highest finisher, taking fifth in the U14 final and breaking his personal best, running 8.08 in the heat and improving to 8.00 in the final.

North Leitrim’s Shannon O’Hagan finished sixth in the U16 Shot with a best throw of 9.80m while Alannah McGuinness twice broke her personal best, running 8.15 in the heats and 8.08 to finish sixth in the U16 60m Final.

Gerard Murtagh was another Carrick AC sprinter to reach a 60m Final, running 8.42 for a new pb in the heats and 8.44 in the U13 final.

North Leitrim’s Aaron Bradshaw & Oisin Carolan finished 7th and 8th in the U17 Shot, Aaron throwing 7.40m and Oisin 6.14m, both throwers showing good potential in their first year in the sport. Their clubmate, Lara Mulvaney Kelly finished 13th in the U15 Shot with a best of 8.40m.

Drumshanbo AC's Eadaoin Lee was also in action on Saturday as she finished 17th in the U14 Long Jump with a best of 3.76m.

On Saturday, Carrick AC had four relay teams in action with none advancing out of the heats although three of them did set new personal bests.

The U17 Girls team of Clodagh Sheerin, Anna Corcoran, Seonna Devaney and Alannah McGuinness took three seconds off their Connacht time as they finished eighth overall in a time of 1.54.38, three seconds faster than they ran in Connacht.

The U18 Boys squad of Oisin O’Dowd, Brian Holahan, Oisin Boland and Niall Sheerin were fractionally faster than their Connacht time as they also finished eighth overall in a time of 1.44.62.

The U16 squad of Oisin Kearney, Eoghan Farrell, Daniel Bosquette and Evan Corcoran were also faster than their Connacht time, finishing eighth in a time of 1.48.93.

Unfortunately, the Carrick U14 boys team of Patrick Charles, Shane Finn, Cian Mollohan and Toyosi Fagbo were disqualified after a mishap on the second changeover in their heat saw the baton hit the deck. Despite picking it up, the team was later disqualified in what was a terrible misfortune for a talented team who will bounce back in the outdoors.

Leitrim's young athletes will be back in Athlone next Saturday when the third day of the Irish Life Health sponsored Athletics Ireland Juvenile Indoor Championships are held. Events featuring on the day include the 800m, 200m, Shot, Long Jump and hurdles and Leitrim will be hoping for some good performances in all disciplines.