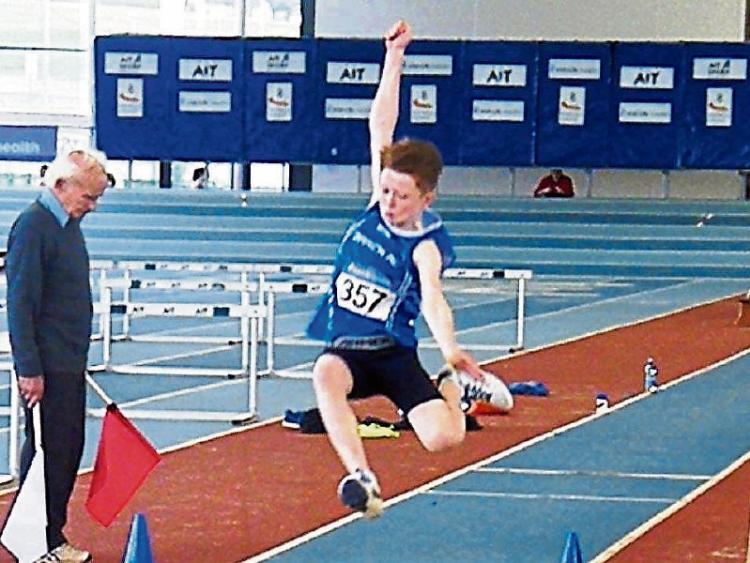 Gerard Murtagh was Leitrim’s top performer on the third day of the Athletics Ireland Indoor Championship as he finished fourth in the U13 Long Jump with a new personal best.

Ballinamore AC’s Ellie O’Rourke produced a top performance as she set a new personal best in a highly competitive U15 800m before finishing eighth in the final.

Leitrim had a smaller contingent at Saturday’s third day of the championship but featured athletes in a wide range of events from the 200m, shot, 800m and 60m hurdles with quite a few personal bests.

Gerard Murtagh was the star of the day with a new personal best of 4.45m as he briefly led the competition in the fifth round of the U13 Long Jump. Gerard lay in sixth place after the first three rounds but was unlucky to see a monster jump ruled a foul in the fourth round.

In the fifth round, Gerard turned the competition on it’s head by going out to 4.44m and into the lead. The response was quick and emphatic as three athletes managed to get by the Carrick AC athlete.

Gerard gave it a huge effort in the last round to improve, adding a centimetre to his best but just outside the medals with a fantastic effort.

Ellie O’Rourke produced a superb new personal best of 2.26.41 in the heats of the U15 800m. In an incredibly fast race that went through the halfway in 65 seconds, Ellie was detached from the top two but fought a tremendous race to book a place in the final as the second fastest loser.

The incredible pace of the heat took it’s toll on a lot of other athletes, as the winner in the final came from a much slower heat but Ellie showed a lot of character to finish eighth in a time of 2.29.51, a great showing considering the record setting pace of the final.

Ellie's training partner Lauren Reynolds was marginally outside her best with 2.39.30 in the other U15 800m.

Fiachra O’Dowd just missed out on a place in U19 200m Final by one place as he smashed his personal best by 0.25, his time of 23.36 ranking him as seventh overall.

O’Dowd was one of a Carrick AC quartet who all set personal bests in the 200m with Shauna McCabe taking three quarters of a second off her best with 28.21 in the U18 heats. Clodagh and Niall Sheerin also broke barriers in the U17 races - Clodagh, in a difficult lane 2, broke 27 seconds for the first time with a time of 26.91 while Niall broke 25 for the first time with an excellent 24.81.

Carrick AC’s Shane Finn threw a massive new personal best of 9.48m in the U14 Shot to finish 10th overall while North Leitrim AC duo Niamh Carolan & Helen Verachtert were both in action in the U14 Girls shot, Niamh 12th with 7.67m and Helen 14th with 6.79m.

In the Hurdles event, Ella McDaid of North Leitrim AC came close to reaching the final as she finished ninth overall in the U15 60m hurdles in a time of 9.92 seconds as she just missed out by one place.