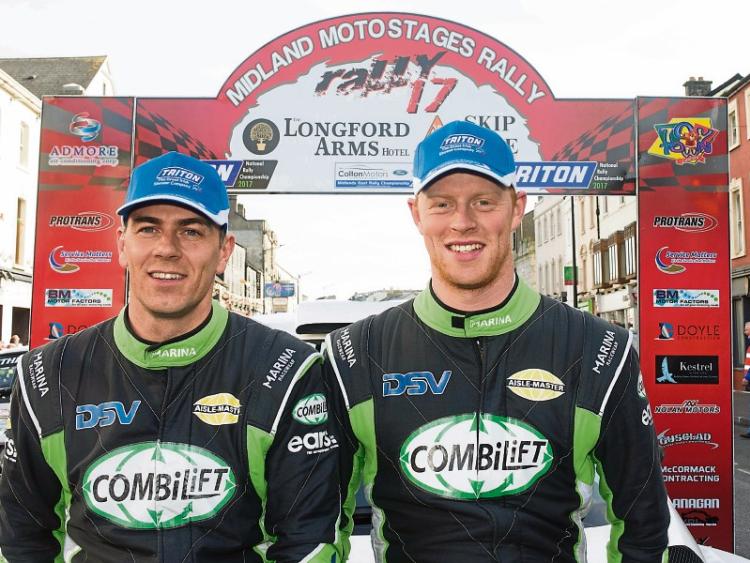 Leading from the start Monaghan’s Sam Moffett and his Cork co-driver Karl Atkinson (Ford Fiesta WRC) took a commanding victory in the Midland Moto Rally in Longford, the second round of the Triton Showers National Rally Championship,

They finished a 69.9 seconds ahead of reigning champions Roy White and his co-driver James O’Brien. Donegal’s Manus Kelly & Gareth Doherty (Subaru WRC) were 21.1 seconds behind in third.

The event organised by the Midland Motor Club under the stewardship of Clerk of the Course Sean Cahill was well organised and provided a welcome financial boost to the local economy.

Fastest times on all three stages of the opening loop close to Longford town propelled Moffett into a 33.5 second lead over Declan Boyle, who spun on the second stage and lost a few seconds towards the end of the third stage when his tyres lacked grip.

Continuing his dominance and despite easing his earlier pace, Moffett stretched his lead to 42.9 seconds following the repeat loop of stages. Boyle spun on stages four and six and dropped some ten seconds. Kelly 6.7 seconds further behind in third stated he was comfortable with his pace.

Having changed the rear tyres to a harder compound, Ian Barrett consolidated his lead in the Modified section where Hetherington was 11 seconds in arrears after he spun on S.S. 5.

In Group N David Guest took up the lead position – just 2.5 seconds from Neil Tohill. On Stage 6, one of their rivals, Sean Gallagher hit a chicane head on and that ended a fine drive. Elsewhere, Shane Maguire and Paul Barrett were third and fourth respectively.

As Moffett swept to a convincing victory, there were a number of retirements over the final loop. Boyle crashed out on S.S. 7 when his Fiesta WRC hit a chicane and ended up in a field. That promoted Kelly into second but he spun on the penultimate stage and dropped to third allowing White to annex second.

Maguire was fourth as Hetherington, who hit a chicane on S.S. 8, claimed top spot in the Modified category. Brian Brogan (Escort) was second.

Oldcastle’s Gary McNamee won the Triton Showers Drive of the Day award, he was co-driven by Dean O’Sullivan.