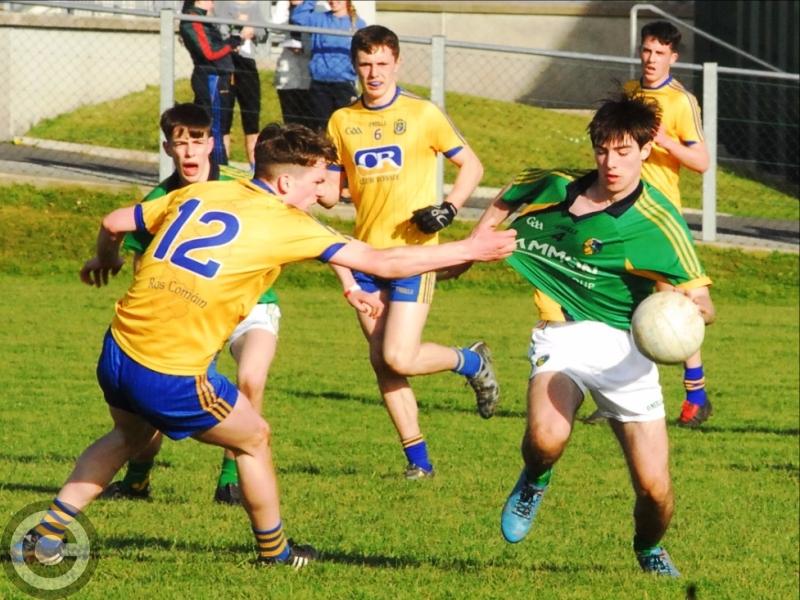 Evan Harkin has his jersey pulled by Roscommon's Ronan O'Dowd in Cootehall. Photo by Willie Donnellan

Like most of this campaign, Leitrim were left  frustrated as a clinical Roscommon sealed victory in the final game of the Connacht Minor League.

There wasn't a hell of a lot between these teams in Ardcarne Park last Saturday but where there was a difference was in finishing and Roscommon had forwards who took their chances with  style.

Leitrim were left ruing missed chances and botched shooting as Roscommon had a far clearer idea of what they were trying to achieve all over the field, spreading the play and pulling the Leitrim defence from side to side.

Oisin McLoughlin top-scored with an impressive tally of 3-2 and was a real bright point for Leitrim but even the Fenagh man will admit that he was gifted two goals, one from a goal-keeping error and the other from a terrible kickout.

Granted, one of Roscommon's goals came from a poor kickout but Leitrim didn't threaten as much as the home team who bossed the middle of the park until sub Aaron Hoare arrived on at halftime.

Leitrim are obviously searching for the right mix but what might please the management is the fact that their best displays have come against Sligo and Roscommon, two teams they will have in the Minor and U17 championships. It is a sliver of hope Leitrim will hope to turn into a shock later this summer.

Leitrim opened in dramatic fashion, Oisin McLoughlin fielding a long delivery from the throw-in, turning his man and soloing in to fire low to the right corner after just 20 seconds. Roscommon’s reply was impressive with Cathal Heneghan and Eoin Mimnagh both on target  and while Sean Harkin drove the ball over the bar when a goal was on the cards. A goal did arrive on five minutes, unfortunately at the other end.

A long ball to Darragh Walsh exposed the Leitrim defence and with Mimnagh in behind, the Roscommon man buried the ball in the net. Roscommon would go on to add points from Heneghan and Callum Fahy.

Leitrim did have chances, Cillian McGloin blasting wide after a surging run half the length of the field. Heneghan & Cian Corcoran (free) swapped points with Oisin McLoughlin while Ronan O’Dowd and Peter Prior also traded scores.

Roscommon seemed to have taken control when two Rossies pounced on a poor kickout and the ball was played quickly into Ronan O’Dowd who drilled the ball to the net.

But lady luck shone on Leitrim in added time when Oisin McLoughlin’s long range point seemed easy meat for the keeper but an attempted batted clearance only diverted the ball to the net to leave the halftime score at 2-7 to 2-4 in favour of Roscommon.

The Rossies again took control in the second half with Callum Fahy curling a point over before the impressive Heneghan robbed James Glancy and soloed his, his long ball being fisted goalwards. The effort was saved but Conor Farrell finished the job with a close range finish.

Fahy added a point before Leitrim enjoyed a revival with points from Riordan O’Rourke and James Clancy before another terrible kickout, this time at the Roscommon end, gave Oisin McLoughlin an easy finish for his hat-trick with a quarter of the game left.

Fahy finished the home team’s scoring with a free while O’Rourke added an injury time free to finish the match.

Talking Point: A disappointing Minor League campaign that ends with five defeats from five. Leitrim have work to do but the bare stats hide a few good Leitrim displays, particularly against Sligo so it is not all doom and gloom.

Kudos to the St. Michael's club on an excellent job hosting Saturday's match.

Turning Point: Hard to pinpoint just one as each time a team got a goal in the first half, the other roared back. Perhaps Roscommon's third goal, early in the second half, gave them the room to dominate and build.

Ref Watch: Austin O'Connell did a solid job in a free-flowing encounter between two teams determined to play good football.

Highlight: Oisin McLoughlin's first goal was a spectacular score, fielding a high ball and beating his man to score low in the corner. Another Cillian McGloin run from his own defence almost led to a goal.

Lowlight: A disappointing League overall for Leitrim with no wins despite a couple of good performances.