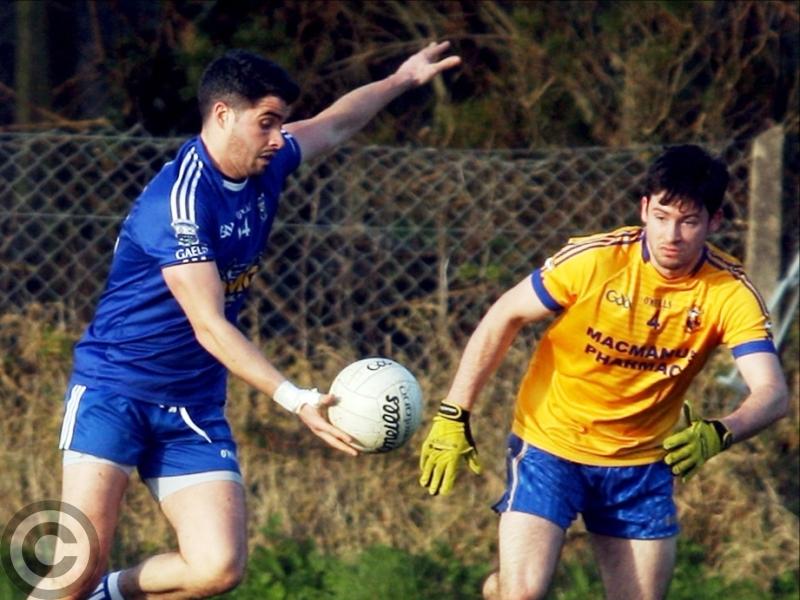 Played in almost summer-like weather conditions in Melvin Park Kinlough and watched by a crowd of well over 200 spectators, the game marked the return of Emlyn Mulligan to the Kinlough club's colours after a number of years service with Dublin side St. Brigid's.

Mulligan certainly spearheaded the triumphant Melvin Gaels performance over Glencar/Manor as he chipped in with 1-6. In the first half Glencar/Manor enjoyed the better of the exchanges and held a two point lead at the break.

But they had no answer to Melvin Gaels' second half resurgence and were completely at sixes and sevens in the third quarter when the Kinlough side took command, hitting an unanswered 1-4 while holding their opponents scoreless in this game changing period.

Niall Brady stretched Manor's advantage but Emlyn Mulligan got the Gaels account opened two minutes later when he put over a well-taken point from an acute angle about 20 metres out near the right sideline.

Daniel Maguire whipped over a ninth minute Glencar/ Manor point after he darted up field, well away from his fullback berth.

After a period of ten minutes without a score, Stephen McGauran, set up by a pinpoint Mulligan pass, shot over for the home-side to reduce the Gaels deficit to the minimum.

Mulligan levelled the proceedings when he pointed a 22nd minute 37 metre free. Before the break Glencar/Manor regained the lead after James Glancy split the Gaels posts from a placed ball and Niall Brady shot over from play.

At half-time Glencar/ Manor enjoyed a 0-5 to 0-2  advantage  after slightly shading the opening 30 minutes.

Emlyn Mulligan reduced the gap between the sides to the minimum again within 44 seconds of the restart when he whipped over a Melvin Gaels point. A minute later Mulligan got behind the Manor cover and blasted to the net after he was put through by a well-hit Liam Ryan foot pass.

Peter McGowan extended the Gaels' lead to three when he fired over a 35th minute point. A minute later Gaels keeper Gareth Phelan made a smart save to deny a James Glancy goal bound effort.

The Kinlough men went further in front when Peter McGowan shot over a 40th minute point after Emlyn Mulligan found him from a '45'. Within a minute, Mulligan shot over to stretch their lead to five points.

James Glancy responded by opening Manor's second half account with a point from a 46th minute free but Peter McGowan answered two minutes later with a Gaels point from play.

Melvin Gaels increased their advantage to seven points after Emlyn Mulligan found the range from two frees in quick succession.

Glencar/Manor won a 54th minute penalty after  Evan Sweeney was taken down. James Glancy had his spot kick effort parried by  Gareth Phelan but Glancy drove the rebound to the net, injuring himself in the process, delaying the game for over nine minutes while he received medical attention for a head wound.

In added time at the end of the second half, sub David McSharry and Jessie McGuinness put over points apiece for Melvin Gaels. Adrian Croal shot a consolation point before the end as Melvin Gaels held on to chalk up a clear cut win.

Main Man: Emlyn Mulligan was undoubtedly the conductor of the Melvin Gaels orchestra  and  his colleagues responded with a high degree of commitment. Even when Melvin Gaels played second fiddle in the first half, Mulligan always popped up to lift their performance.

Talking Point: Glencar/Manor's second half collapse was disappointing. They provided little opposition as the competitive edge of the game became almost not existent.

Turning Point: Melvin Gaels 32nd minute goal proved to be the game's turning point. This score put the Gaels in the lead for the first time in the encounter.

Highlight: The goal that Emlyn Mulligan scored within two minutes of the restart changed the course of the game. The strike was set up by Liam Ryan, who spotted Mulligan lurking free behind the Glencar/Manor cover.

Lowlight: Glencar/Manor's slide in their overall performance all over the field in the first 23 minutes of the second half when the Gaels outgunned them by 1-7 to 0-1.