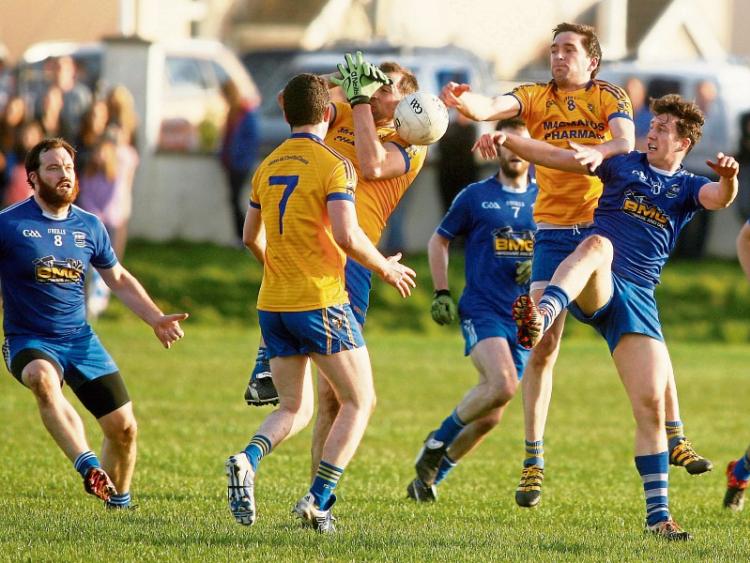 Melvin Gaels and Glencar/Manorhamilton players tussle for possession during the Dunnes Bar Division One clash in Kinlough on Saturday evening. Photo by Thomas Gallagher

The big guns of the Leitrim club football send out a message last weekend with impressive wins for County Champions Aughawillan, Mohill and Ballinamore Sean O’Heslin’s.

Aughawillan made the journey to Drumkeerin to take on 2016 Division 2 champions a rewarding one as they had 14 points to spare. The Champions look set for a good season under Tommy McCormack when they rolled to an impressive 3-12 to 0-7 victory.

Drumkeerin, aiming for Intermediate glory in 2017, will be hoping for an improved performance when they travel to Gortletteragh next Saturday for their second goal but the Gortletteragh will be in good spirits after their 1-11 to 0-11 victory over St. Mary’s Kiltoghert.

League Champions Mohill also stated their intent in no uncertain fashion as they had ten points to spare over Allen Gaels, 0-22 to 1-9. County star Keith Beirne led the way with an incredible 12 points while Ronan Kennedy added five more.

Allen Gaels trailed 0-10 to 1-2 at the break after Gareth Higgins found the net for the Drumshanbo men who also had a goal disallowed. In the second half, Mohill’s superior fitness and large contingent of County players told the tale as Allen Gaels will be looking for their first win when they take on Dromahair at the weekend.

Dromahair will also need a win in a hurry as Aughnasheelin had an impressive ten points to spare in their meeting last Saturday. The home side won 0-18 to 0-8 in what is an impressive start for Aughnasheelin and maybe slightly worrying for the north Leitrim club.

Fenagh St. Caillin’s will also try to pick themselves up off the floor after they suffered a massive 2-19 to 0-5 loss to neighbours Ballinamore Sean O’Heslin’s. The 2016 Intermediate champions led 1-9 to 0-3 at halftime and doubled their score in the second half.

Luke Murphy top scored with seven points while Mark McGrory and Niall McGovern scored 1-1 apiece as Ballinamore seem intent and more than capable of making an impact on this year’s Senior Championship.

There are a couple of mouth watering clashes down for next Saturday with Mohill taking on Melvin Gaels while the derby meeting of Sean O’Heslin’s and Aughnasheelin should draw a big crowd to Ballinamore.

Aughawillan will be confident of registering a second win when they take on Fenagh St. Caillin’s at home while there will be a few teams looking for a first win when Glencar/Manorhamilton take on St. Mary’s Kiltoghert and St. Patrick’s Dromahair face Allen Gaels.