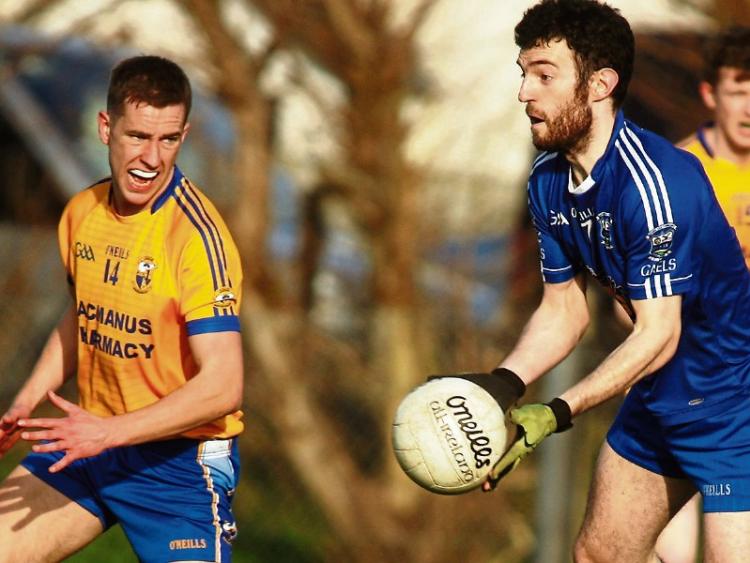 Melvin Gaels Philip McGowan about to give a pass as Evan Sweeney closes in for Glencar Manor during Saturday's Dunnes Bar Division One clash in Kinlough. Photo by Thomas Gallagher

Club players are in for a very busy Summer after the Leitrim GAA County Board last week released their Master Fixture plan for 2017.

With the first round of the Division One and Two Leagues starting last weekend, players are already planning for the Leitrim Club Championship with the draw scheduled for Monday week, April 24.

With the new two groups of six teams in the Senior and Intermediate grades, clubs will see a massive increase in championship fixtures with the competition due to start on the weekend of July 21, 22 & 23, with the County Board open to the possibility of Friday night games.

Obviously with a big increase in championship games, further pressure has been put on championship dates with the Board scheduling three rounds of the Division One and Two Leagues for Wednesday evenings in May, June and July.

Of course, a lot of games in the months of May, June and July are dependent on the progress of the Leitrim Senior team in the Connacht Championship and All-Ireland Qualifiers.

The Hurling Championship is also featuring a major change with three rounds of the Senior Club championship fixed for Friday evenings in June, July and August with the Semi-Finals due to be played in October.

The County Finals are scheduled for the first two weekends of October and the County Board aim to have all competitions completed, provided there are no hold-ups or snags, by the October Bank Holiday weekend.

The main dates for Club competitions are as follows:

August 12/13: Junior A Round 3/Junior B Championship

The full list of Men's Inter-County and Connacht Club fixtures are as follows:

Saturday, June 24: All-Ireland Qualifier Round 1B

Saturday, July 8: All-Ireland Qualifier Round 2B

Saturday, July 15: All-Ireland Qualifier Round 3B

The following are the Ladies Senior Inter-County fixtures for the year:

May 14: Connacht IFC: Leitrim v Sligo (if either or one in NL playoff date change)

June 17: Roscommon v who ever must have 2nd game