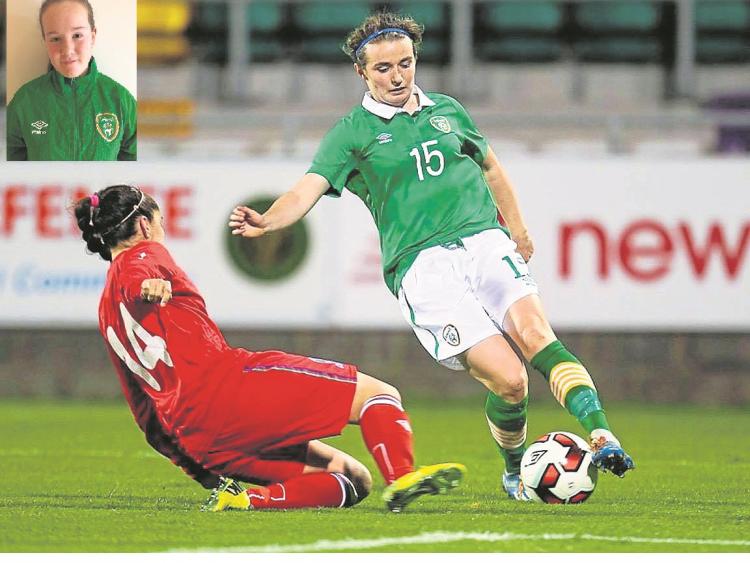 Dearbhaile Beirne (main picture) was in action for the Ireland U-19 team while Muireann Devaney (inset) represented Ireland U-15s in the Bob Docherty Cup.

The county's growing impact in soccer was illustrated last week with two International call-ups for Leitrim players as well as a Connacht Schools title for St. Clare's CS Manorhamilton.

Mohill's Dearbhaile Beirne, who plays with UCD Waves, and Manorhamilton's Muireann Devaney were both in action for Irish International soccer teams over the last week.

Beirne was a member of the Ireland U19 team who missed out on qualifying from the UEFA European Championships Elite Qualifying Phase in Limerick last week.

The Mohill player featured in two of the three games and supplied the cross for Ireland's opening goal against Ukraine.

Manor Ranger's Muireann Devaney was in action for the Irish Ladies U15 team in the Bob Docherty Cup in the AUL Complex in Clonshaugh, Dublin this week and was named in the starting 11 for the 4-3 victory over Scotland on Monday. Muireann also featured this afternoon when Ireland claimed third spot in the competition with a comprehensive 6-0 win over Shelbourne.

Well done to the 6 Connacht girls who represented @faischools International team. Another great performance and another good win today. pic.twitter.com/5KZNx2Ws76

Both Beirne and Devaney are also highly accomplished Gaelic footballers and were key members of the Leitrim Ladies Senior and U14 teams last year.

The glory wasn't confined to the Leitrim ladies in the last week as St. Clare's Comprehensive School Manorhamilton claimed a thrilling victory in extra-time in the Connacht First Year Boys B Final in Castlebar last Thursday, Patrick Montgomery's goal seeing off Seamount Kinvara in extra-time.
Manor Rangers Senior Men are also chasing Connacht glory on Easter Sunday when they take on Ballinasloe Town in the T P Brennan Connacht Cup Quarter Finals at 2.00.