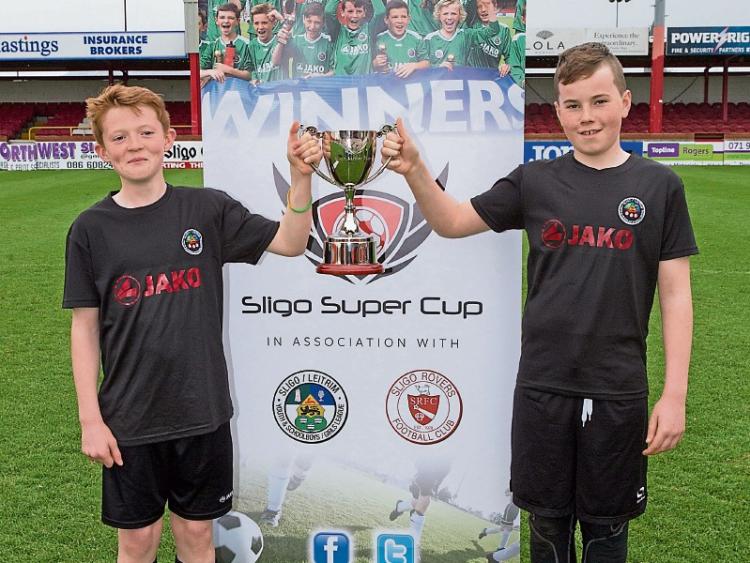 Up to 130 of the most promising soccer players from across Ireland and the UK will be parading their skills in Sligo this weekend in a unique feast of underage football.

Hosted by Sligo Rovers and the Sligo Leitrim Schoolboys Leagues, with the full backing of the SFAI, the Sligo Super Cup u-12 tournament has attracted top cross channel academies such as Celtic and Sheffield Wednesday alongside Club Northern Ireland, Linfield, Dublin District Schoolboys League, Donegal League, Mayo League and the locals, Sligo/Leitrim.

There will be strong interest in Leitrim as the local squad is captained by Carrick Town youngster Niall Holahan. He is joined by Carrick team mate Gerard Murtagh and Sean Sheridan from Manor Rangers.

With four teams in each of two qualifying groups, the programme includes sixteen matches across three action-packed days, kicking off under the lights at Sligo Showgrounds on Friday night.

Stand-out fixtures include the meeting of Celtic and Linfield on Saturday, probably the only time these sides have faced each other at any level. Other interesting ties are the match-ups between Sheffield Wednesday and Club NI, which is the academy team of the Northern Ireland international set-up; and Celtic against the cream of Dublin schoolboy talent, DDSL.

Some of the Celtic games are being staged at the Showgrounds-based Sean Fallon Centre, named in honour of the Sligoman who represented Celtic as player and assistant manager, and who was responsible for unearthing talents such as Kenny Dalglish, Lou Macari & Packie Bonner.

Sean Fallon Jnr says his late father would have been proud to see a young Celtic team playing in his home town.

“As a player and a coach he always had great time for the development of young players, so for a young Celtic team to be coming to play in a facility named in his honour in his home town is something really special. I have no doubt he will be watching from the best seat in the house”, he explains.

Willie McStay, who guided Sligo Rovers to a remarkable treble of trophies, including the first division championship and the FAI Cup in 1994, will be guest of honour at the tournament which runs from Friday to Sunday. He will also be the subject of 'An Evening with Willie McStay' at the Glasshouse Hotel on Saturday night, during which he will reflect on his career with Celtic and Rovers, as well as his managerial experiences in Scotland, England and Hungary.

Boosted by generous sponsorship from the local business community, the main sponsor is John McKeon from Sligo Pet Stop Warehouse, Carraroe, all is now set for a magnificent weekend feast of underage football.

The first game kicks off at 6.30 on Friday, when there will be a total of four matches. There will be eight games on the Saturday, beginning at 10 am and the final play-off games take place on Sunday morning, with the final timed for 12pm. Weekend tickets are available for €10 & €5 concessions.