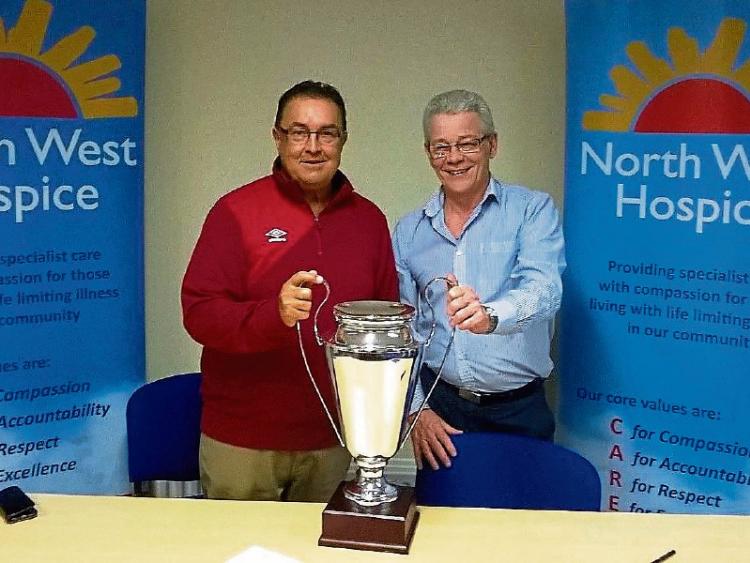 Walsh scored all five of Manor Rangers' goals in what was a comprehensive win for the Manorhamilton side against Sligo town based Glenview Stars.

The game was less than 10 minutes old when Walsh struck for his first goal when he headed Brian McDonald's corner to the net.

Glenview had an opportunity to level matters shortly afterwards but the normally deadly accurate Gino O'Boyle was wide with a header from Enda McGowan's corner.

Glenview were punished fully for that miss with Walsh converting a penalty shortly afterwards to leave the home side in a very strong position.

Manor saw a number of good chances to extend their lead come to nothing and they were punished for those misses on the stroke of half-time when Enda McGowan scored for the Sligo side.

Any fear of a Glenview comeback were all but put to bed within 14 seconds of the second half getting underway as Niall Walsh pounced to complete his hat-trick. A brilliant run from Alan Hickey saw him leave three defenders in his wake before he released Walsh with a well timed pass and he then dinked the ball over the Glenview goalkeeper and into the net.

Manor spurned a number of chances to extend their lead, with Paul Lonican among those to go close.

Twenty minutes into the second half the result was put beyond doubt when Walsh struck for his and Manor's fourth goal of the game when he scored from close range after a corner.

The scoring was completed when Brian McDonald's cross was turned home by Walsh late on as Manor advance to the last eight of the competition.

U15s advance to final: Manor Rangers will make the journey to Ballisodare to face Ballisodare United this evening in the final of the U-15 league (kick-off 6.30pm). Manor Rangers defeated Merville United 5-4 on Wednesday last in Merville. Oran Gethins was the Manor hero scoring a hat-trick while Manor's other goals were scored by Nathan McMorrow and Andrew Rooney.

U10s unbeaten in Sligo: Congratulations to the U-10 team who, under the guidance of Saoirse Cummins enjoyed three wins and a draw in the Cleveragh Sports centre on Saturday.

U13 league semi-final: It proved to be a tough day at the office for our U13 team when they faced Merville in the U-13 league semi-final. Manor could have no complaints with the result as they were beaten in the league semi-final against a hungrier more physical side. Liam Lee's strike proved to be the difference between the sides with only one goal separating the sides. In reality Ben Gavin in the Manor goal produced three brilliant saves to keep the Hugo Clancy managed side in it.

The whole team were a credit to the club. Man of the match for Manor was Gabriel Gilbride. Manor Rangers would like to thank Merville FC for agreeing to a change of kick off time in order to facilitate Manor Rangers.