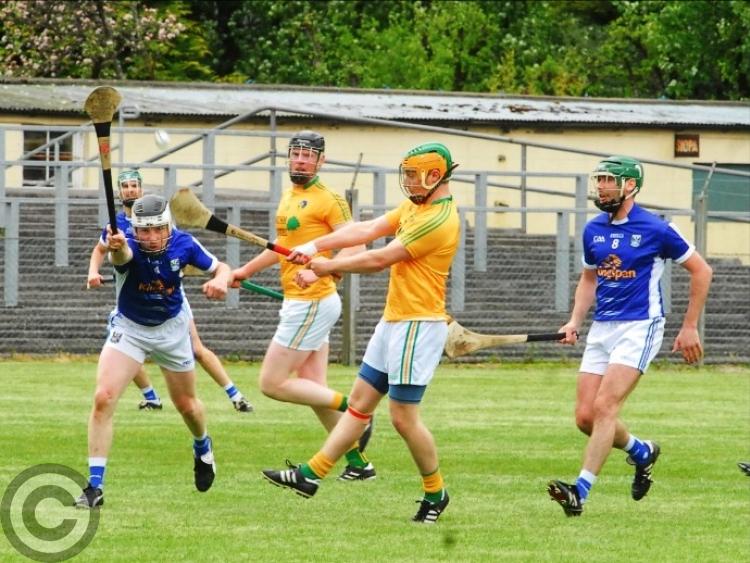 Gavin O'Hagan shoots for a point against Cavan. Photo by Willie Donnellan

It may have been a bit of  a struggle at times but Leitrim picked up their first win of the Lory Meagher Cup with a solid win over Cavan in Pairc Sean Mac Diarmada.

Just a week after an excellent performance against Fermanagh, Leitrim struggled to reach those heights again but they still have too much power and when they hit their stride in the second half, Cavan had no answer.

Cavan, fielding an inter-county team for the first time since 2011, made a brave effort and had Leitrim in trouble in the first half but a Zak Moradi goal, against the run of play it has to be said, gave Leitrim a real boost and the platform for the second half.

And in the second half, Leitrim pulled away with the benefit of the wind as Colm Moreton, leading the way from centre-forward, delivered a top class performance.

Leitrim now face Lancashire next Saturday at home in Pairc Sean Mac Diarmada in a game that can go a long way to earning a place in the final for Leitrim, particularly after the Exiles shocked Fermanagh last weekend for their first win ever in the Lory Meagher Cup.

Rob Everett opened the scoring for Cavan with a long range point in the first minute but two quick responses from Gavin O’Hagan and Colm Moreton had a lively Leitrim already looking as if they were on the road to an easy win.

Padraig O’Donnell was denied a goal when his shot was saved while a poorly hit effort from Moradi was easily dealt with by the keeper Darren Sheridan. Sean Keating levelled the scores for Cavan on seven minutes and added another four minutes later to edge the visitors in front.

Gavin O’Hagan, a lively presence all day for Leitrim in the full-forward line, scored a fine point in 13 minutes with a Padraig O’Donnell free on 15 minutes edging Leitrim back in front.

However, Cavan were dominating a lot of the battles and their defence was getting to grips with the Leitrim attack as Cavan full-back Mark Hayes blocked a shot from O’Hagan after the ball broke from a long Dave McGovern delivery.

O’Donnell converted a free after an Anthony Sheridan foul was penalised by a yellow card, the second for the visitors but they were finding some good form and two Kevin Conneely points in the space of a minute, both from long range, edged Cavan back in front.

Diarmuid Cahill saw a 65 go wide but he made amends with a free from  halfway  with five minutes left in the half to put Cavan two points clear.

Crucially, the next score was the only goal of the game - a crossfield shot seemed to drift wide but Zak Moradi did incredibly well to field the ball under pressure and beat his man, drilling the ball low to the corner for a huge score and a 1-5 to 0-7 halftime lead.

Strong words were obviously spoken at halftime because Leitrim were a more focussed  team in the second half and it took a wonder save from Cavan keeper Darren Sheridan to deny Padraig O’Donnell a goal just ten seconds after the restart, an outstruck foot diverting the sliothar away for a 65.

Gavin O’Hagan almost goaled too but his shot hit the post before O’Donnell put over a free while O’Hagan was denied in a goalmouth scramble. But the points started to flow with Zak Moradi and Colm Moreton both twice on the mark in a seven minute spell while O’Donnell saw a shot fly into the side-netting.

Kevin Conneely halted Leitrim’s scoring but only temporarily with a fine point on 13 minutes but Leitrim hit back with further scores from Moradi, Moreton and O’Donnell (free) to extend the lead to nine points.

Cavan threatened a goal midway through the half but Declan Molloy made a good save from Conneelly with Diarmuid Cahill converting the 65.

O’Donnell kept hunting for a goal at the other end but was denied again but Sheridan in the goal and Cavan had  points from Everett and Conneely but Leitrim hit back with O’Donnell and Moreton  on target.

Main Man: Zak Moradi burst into life in the second half and was a real threat but Colm Moreton was the leading performer throughout the game, his physical power and touch marking his above for a lacklustre Leitrim.

Talking Point: Not a Leitrim one but rather the return of Cavan to inter-county hurling is long overdue and more than welcome. The Breffni county showed some potential and some of their players have real ability but they lacked organisation and know-how. Nevertheless a good start for Cavan and one they can build on.

Turning Point: Zak Moradi's goal just before halftime came against the run of play but it proved to be a huge score as it punctured growing Cavan confidence.

Ref Watch: Louth official Kevin Brady did a very solid job and kept up with play. Might have been a little harsh at times on Cavan but overall did a good job.

Highlight: Despite playing poorly for long stretches, Leitrim still racked up 1-20 - a great tally considering the home team missed a succession of goal chances. They will be much better against better opposition as they will be sharper and more focussed.

Lowlight: Leitrim's first half performance was worrying for a team that has impressed so much against Fermanagh as the Green & Gold were completely lacking any sort of intensity.