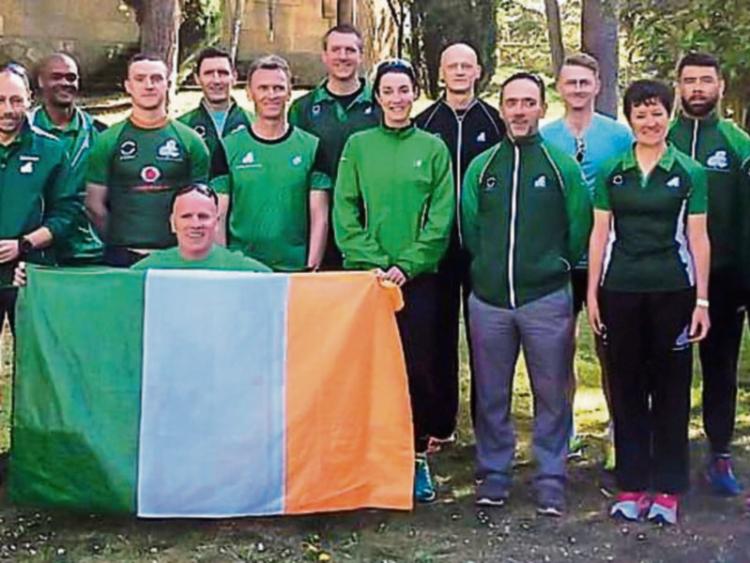 Siobhan Murtagh (centre) pictured with the Irish team in Portugal

Lough Key Triathlon Club’s Siobhan Murtagh suffered the absolute heartbreak of a punctured tyre to put her out the running at the ETU European Duathlon Championships in Soria, Spain last Sunday.

Having come into the Championships in good form after recent success nationally, Murtagh would have been tipped to do quite well in the race and that was borne true with an excellent first leg in the 10k run - 41k bike - 5k event.

A comfortable 10k of 42 mins 50secs had her 4th overall and 3rd in her age group as she headed off on the technical bike leg.

She had suffered a puncture on her arrival in Soria while out on a course reccie on Friday and she would have hoped that all her bad luck had been used at that point but disaster struck very early on into the bike leg of the race with another puncture which put her out of contention and out of the race.

It was a devastating blow after six months of hard training building up to the event but she was philosophical by saying that while she was ‘gutted’ she was determined to give it another go again next year having already qualified due to her placings at the National Championships and National Series ranking.

Murtagh was the first of four Lough Key athletes who are fighting for European honours this summer with Tojo Lazzari, Dympna Kelly and Andrew Brennan set to compete at the Triathlon Championships during June.

Kelly began her race prep last week-end in Portugal by winning the Praia da Luz Triathlon while on holiday out there.

Although entered to get some early season open water racing in, she had to be content with a change to a duathlon as rough seas meant the 1.5km swim was altered to a 5km run in its place.

She lead from the start and won the ladies event in 2 hours 28 mins, over 6 minutes ahead the second placed female finisher. Finbarr Keaney also took part and finished well up the rankings.