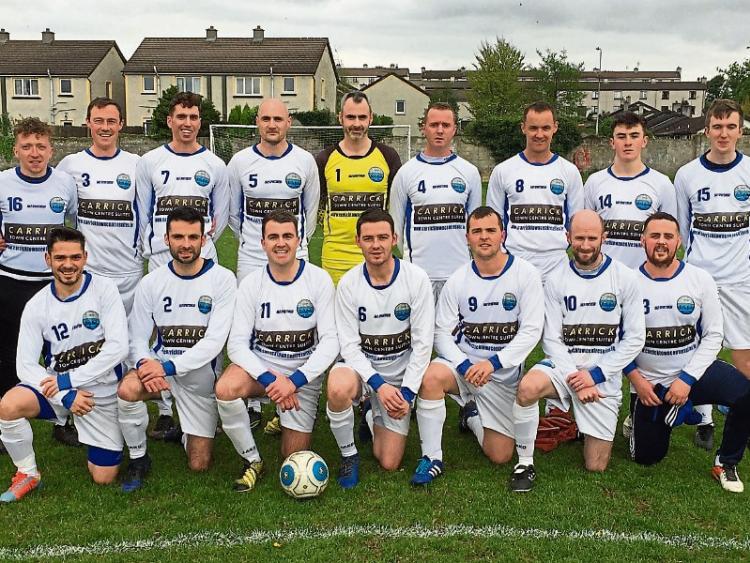 Carrick Town's interest in the Robert Cawley Memorial Cup came to an end on Friday evening last but only after a thrilling semi-final encounter in which extra-timed was needed to separate the sides.

This game had it all with both sides intent on attacking and it proved to be an absorbing end to end encounter from start to finish.

Merville opened the scoring with Graham Irwin on target but the Leitrim side soon hit back with Shane Fitzpatrick levelling matters.

Irwin doubled his and Merville's tally when he once again fired Merville ahead only.

However, Carrick were more than making up the numbers in what was developing into an engrossing semi-final and the sides were level once more when Alan Doherty found the Merville net.

Both sides were inseparable after ninety minutes but in extra time man of the match Graham Irwin stepped up to hammer home a glorious winner and fire this young Merville United side into their first final.

The second semi-final took place in Riverstown and there was little to separate MCR and Arrow Harps.

MCR had the best of the first half and when Arrow Harps got through they found Tony Clarke in a rich vein of form in the MCR goals.

MCR's Ciaran Harvey showing his silky skills drifted by a few defenders to put through Joe Cobbe one on one with the Harps keeper. Cobbe kept his composure and hit the back on the net to score the goal that insured them a crack at lifting the Cup.

The final will take place next Sunday (KO 3pm) at the Ray Mac Sharry Complex and what a day it promises to be.

As a reward for their exploits in the FAI Junior Cup, Boyle Celtic were entered into the qualifying round of the Daily Mail FAI Cup. Boyle made the long journey to face another of the Junior Cup semi-finalists, Killarney Celtic in what was a keenly contested encounter on Saturday evening.

Ultimately Boyle were to suffer a narrow defeat with the only goal of the game arriving in the first half. Boyle can now concentrate on their games in hand and also the away trip to West United of Galway on Sunday next in the Semi Final of the T P Brennan Connacht Cup.

This is a title Boyle Celtic can win and after their exploits this season who could deny them that.