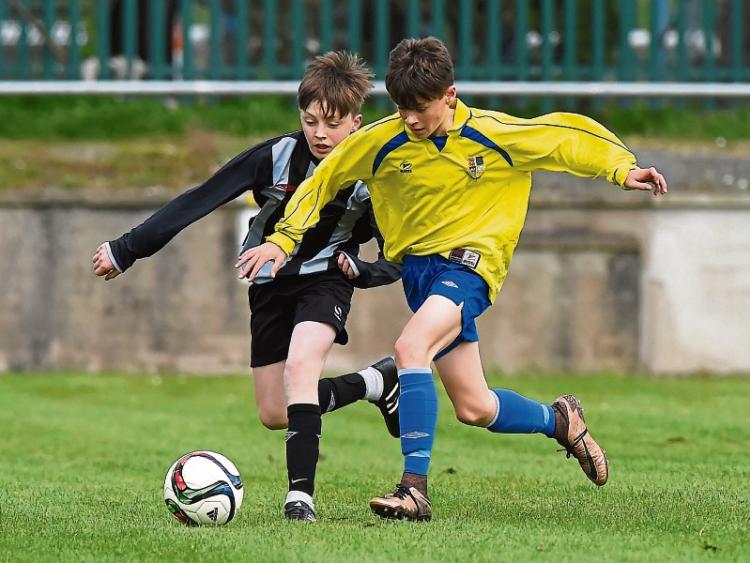 St Clare’s CS Manorhamilton did Leitrim proud as they confirmed their place in this year's All-Ireland final with a 8-2 demolition of Mulroy College Milford at former League of Ireland venue Gortakeegan Monaghan on Tuesday week last.

Played in ideal conditions, this semi-final was still delicately poised at half time as St Clare’s twice came from behind to lead 3-2 at the interval. All this was to change in the second half however when 'Clare's ran in five unanswered goals against a well and truly shell shocked Tir Chonaill side.

St Clare’s began brightly dominating the opening exchanges but they found themselves behind when Mulroy caught them on a quick counter attack as Darragh McDaid broke down the centre outpacing the Connacht champions defence before finding the net with a well taken goal.

This setback was completely against the run of play and in fairness 'Clare's showed great composure and did not panic with Eanna Clancy orchestrating manoeuvres in midfield and Diarmuid Giblin equalising with a cool finish on 18 minutes.

Parity did not last long however with Mulroy once again securing an unlikely advantage as Darragh McFadden made it 2-1 from a 35 yard free.

The St Clare’s reply was instantaneous as Eanna Clancy made it 2-2 after Mulroy were found wanting from a inswinging corner before Patrick Montgomery put them ahead for the first time on the stroke of half time.

In the second half there was never any doubt of which provincial champions were more superior as St Clare’s dominated every sector of the pitch.

They extended the lead to 4-2 as their strikeforce combined with Giblin crossing from the right for Montgomery to add the close range finish. At this stage Mulroy were all at sea as they were on the backfoot continuously and confusion in defence lead to an own goal with Montgomery in close proximity ten minutes into the second half.

The Donegal sides woes compounded further as Montgomery completed his hat trick with Giblin once again the provider to make it 6-2 before Giblin netted for the second occasion with a calculated finish from a Matthew Connolly ball from defence midway through the half.

The Ulster champions were continually found wanting as they simply had no answer to the pace and tempo of a well organised 'Clare's side who never deviated from their game plan even though this game was over as a contest from a very early stage of the second half.

In a rare respite for Mulroy, Oisin Heraghty was put through on goal but 'Clare's custodian Shane Conlon was both brave and quick as he diverted the danger.

The final goal of the afternoon came three minutes from time with Cathal O'Connell the catalyst as he supplied Montgomery who bamboozled his marker with a quick turn inside before finding the net for a personal tally of four and goal number eight for a rampant St Clare's.

Indeed such was the dominant nature of this St Clare’s performance it would be hard to estimate if there is a national crown in this young squad. They may have been fortunate to have caught their Provincial neighbours on a bad day or maybe this is a particularly bad year for Ulster schools soccer at this level.

All these questions will be answered on All Ireland final day.

However nothing can disguise the fact that St Clare’s looked most impressive against Mulroy and it was evident that they are a well drilled unit, excellently coached and undoubtedly will be magnificent ambassadors for Leitrim when the All-Ireland decider comes round.

Congratulations to Anthony McDonald, the players and all involved with St Clare’s Comprehensive and best of luck in the Final.