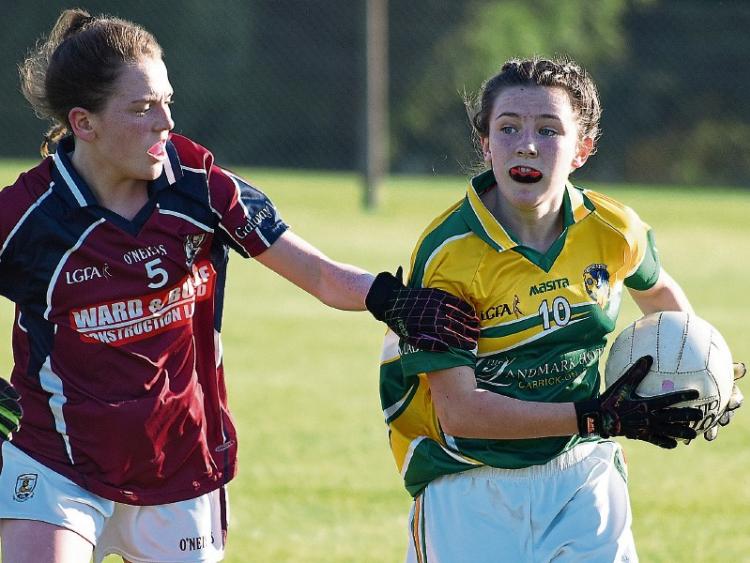 Leitrim's Shaylyn Ward charges at the Galway under pressure from a defender during last Sunday's Connacht U14 A Championship Final in Swinford Amenity Park. Photo by Mick McCormack

Leitrim Ladies face into a crucial meeting with fierce rivals Sligo next Sunday as they begin their TG4 Connacht Intermediate Championship campaign.

After a battling display from the County U14 team against Galway in the Connacht A Final in Swinford last Sunday, Leitrim Ladies will be hoping to continue that good form when they take on the Yeatswomen next Sunday in Drumshanbo's Shane McGettigan Park at 2 pm.

The first round of the provincial championship pits last year's Connacht Intermediate finalists in a fascinating tie that pits three evenly matched teams in a battle that promises to go all the way.

After the controversy of last year when a coin toss was needed to separate Leitrim, Sligo and Roscommon after the Group stages, Connacht Ladies have set out clear guidelines for the procedures for separating teams.

Ultimately, in the case of a three way tie, a coin toss will still be used to send one team into the Final while the other two teams play off.

In other GAA news, Leitrim Junior footballers booked their place in the Connacht Final thanks to a four point win over Galway last Friday. They now face Mayo or Sligo in the Final, provisionally fixed for next Wednesday, May 17.

Leitrim hurlers also kept their Lory Meagher Cup dreams alive with a dramatic injury time victory over Lancashire last Saturday, Clement Cunniffe converting a 50 yard free to give the Green & Gold a one point victory over the Exiles as they take on Warwickshire this Saturday.