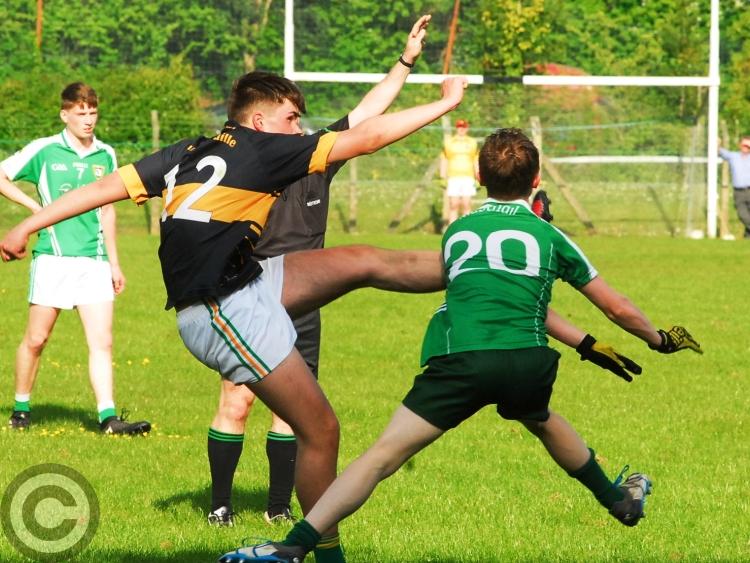 The story of an enthralling final is hard enough to tell but the epic scoreline should give some indication of a thrilling game that gave us twists and turns aplenty with Rinn Gaels' greater quality eventually telling it's tale in the end.

Rinn Gaels simply had too many good players operating a higher level than a brave Mohill who refused to give up but lacked the overall strength of the Bornacoola & Gortletteragh combination. It was that strength in depth that proved vital in an exciting contest.

It is hard to pick between Shane Mallon and Jamie Quinn as the game's most influential performer but both were outstanding and look like real prospects while Mohill's Jordan Reynolds did everything he could to prevent a Rinn Gaels victory, scoring an impressive 1-10 on the day.

Rinn Gaels set their stall out early with Jamie Quinn scoring two points in the first three minutes but Mohill were equally quick to respond with Jordan Reynolds converting two frees to tie the scores.

Shane Mallon and Reynolds swapped points but Mohill started to get on top with Jamie McCaffrey scoring two excellent points for Mohill who seemed to be taking control.

But Rinn Gaels responded well with Shane Mallon hitting his second before Sean O’Riordan fired over a good point. McCaffrey came back with a huge point under pressure but the scores were instantly level when Jamie Quinn converted a free.

O’Riordan had his second point after he gathered a long free and scored from distance while McCaffrey was denied a goal when his shot was deflected out for a 50.

Rinn Gaels got a bit of luck when it appeared Oisin Niblock had taken the ball clean off the floor to set up Jamie Quinn for a point but there was no doubting Quinn’s next score, a wonderful point from the corner defying expectations.

That goal came after Rinn keeper Luke McAuley did well to grab a Reynolds goal-bound shot and from that, they transferred the ball all the way down the field where Shane Mallon raced through to fire low to the net.

Cian Mallon availed of poor marking to fire over from play and the same player added a free on four minutes.

Mohill almost hit back with a goal when Johnny Boyle shot narrowly wide but they didn’t have long to wait when another Boyle run saw him off load to Reynolds and his powerful shot went in despite McAuley getting his hands to the ball.

The game was back in the melting pot however when Boyle drove home a great goal after a move down the wing, leaving two points between the teams but again Rinn Gaels showed their class with a devastating response.

Sub Odhran Heslin pointed before Sean O’Riordan gathered under pressure, held off his man and blasted to the net to open up a six point gap again.

Jordan Reynolds put over two frees as Mohill refused to give up, Jamie McCaffrey cracking a shot off the crossbar. But still Mohill fought back and when Johnny Boyle fired home with less than two minutes left, Rinn Gaels were under pressure.

But as they had done all day, Rinn Gaels absorbed the pressure and hit back with Shane Mallon and Jamie Quinn fittingly firing over a point apiece to seal a deserved victory.

Main Man: Where to start - Jordan Reynolds scored 1-10 and ended up on the losing team. Niall Keegan, Jamie McCaffrey and Johnny Boyle all excelled for Mohill. For Rinn Gaels, there were so many key performers - Shane Mallon was electrifying every time he got the ball, scoring 1-5, Jamie Quinn hit eight brilliant points with only two frees and Sean O'Riordan was equally deadly. Add in Kieran Reen and Cian Mallon and Rinn Gaels simply had too many big performers at the right times of the game not to win this contest.

Talking Point: The new underage structures are going to take some time to really bed in but this was an excellent advertisement with open attacking football and both teams had plenty of games before this. The standard will only get better in the years ahead.

Turning Point: Easy this - the teams had been locked in a yo-yo struggle in the first half but Shane Mallon's goal a minute into the second half gave Rinn Gaels their first real daylight and Mohill were always chasing the game after that.

Ref Watch: Fintan McBrien had an easy job with two teams committed to attacking but he did it well.

Highlight: Hard to pick one, there were so many good scores but Rinn Gaels refusal to buckle impressed.

Lowlight: Hard to find anything but if you had to, the art of defending wasn't as good as it could be on both sides. It is great to see attacking football but defending is an art too!