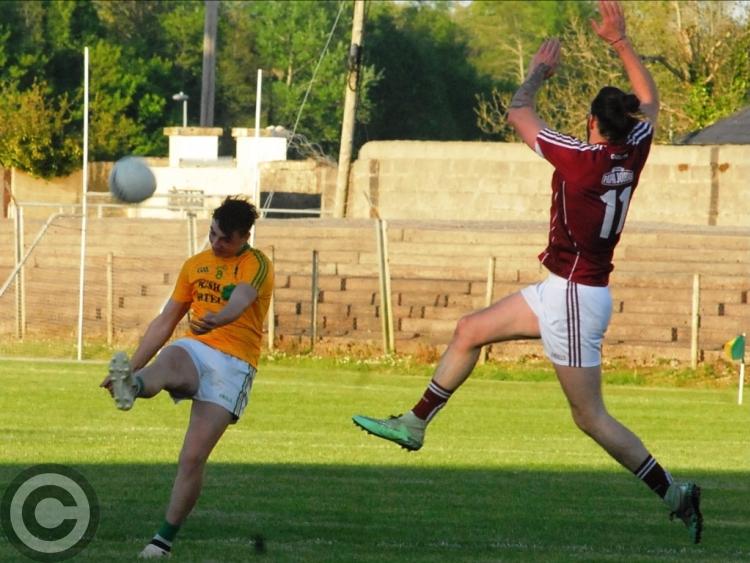 With many legitimately wondering over the future of a competition that pits Junior & Intermediate players from some counties against possible first team stars from others, it was the Senior team stars wearing Green & Gold who had the biggest impact in Pairc Sean Mac Diarmada.

The introduction of Madden and McGovern  turned this game Leitrim's way as a Galway team, who were probably the better side in general play, couldn't live with their strength and power.

McGovern in particular energised a Leitrim team who were a mix of County Senior team panelists and quality club players although it has to be said that manager Seamus Quinn had a few players during down the invitation to join the squad.

Leitrim will face either Mayo or Sligo in Wednesday's Final and the question will be how many of the Senior team will be allowed lineout for the Juniors, especially with the Senior clash against London just ten days after that.

Leitrim could conceivably call on Darragh Rooney, Wayne McKeon, Pearce Dolan and Damien Moran but it will be a tough decision to make.

The tone for the match was set early with seven points in the first ten minutes. Keith Beirne from a free and Jack Heslin were on target for the home side but Galway looked a class above as they hit five good points, all from play, from Noel Varley, Martin Coady, Antaine O’Laoi (2) & Patrick O’Donnell.

But the tone changed when Leitrim created a three-on-two overlap and Cathal McCrann provided the final pass for Keith Keegan to score an excellent goal on 12 minutes.

Coady and Beirne swapped points but Galway looked as if they had taken control again when Michael Day made a good catch in the middle, a quick move involving Alan Molloy followed and Paddy Walsh was left with a simple goal on 18 minutes.

Leitrim’s response was deadly - Conor Gallagher pointed after good work from Niall McGovern and Jack Heslin and from the kickout, the ball was quickly transferred in for a clinical Gary Plunkett finish.

O’Donnell, impressive at halfback for Galway, replied with a point before St. Mary’s Nicholas McWeeney fired over after good work from Heslin. Keith Beirne then kicked two bad wides but made amends with a fine free.

Noel Plunkett joined the attack when a Galway kickout went straight to him, a 30 yard run and fine point resulted. Galway finished with a Niall Lee point but Leitrim led 2-7 to 1-7 at the break.

Keith Beirne swept over from play in the first minutes but Galway hit back with points from Molloy and Gary Kelly. Beirne put over a free as Leitrim were relying on placed balls but Galway were coming strong and sub Craig Kennedy, Michael Day and Martin Coady pulled the team’s level after 15 minutes.

Cathal McCrann cracked a shot off the crossbar with Beirne sending the resulting 50 over the crossbar but Galway were back in front when Philip Farrelly fouled Craig Kennedy after a shot fell short and Gary Kelly sent to the net.

Leitrim had already brought on Oisin Madden and he had tightened up the Leitrim defence but the response to the Galway goal saw Dean McGovern enter the fray and almost immediately he charged through and managed to hook a shot over the bar despite a clear jersey pull that should have let to a penalty.

Keeper Manus Breathnach put over a 53 yard free and Galway’s Antaine O’Laoi shot wide after a move cut open the Leitrim defence in a real let-off.

Two expertly Keith Beirne frees, one moved in after a foul on McCrann despite the Gortletteragh man lashing out in front of the referee, and the other after play was called back despite no apparent foul, saw Leitrim draw level with less than three minutes left.

Cathal McCrann then fired over a huge point and Beirne had a wide before Antaine O’Laoi missed what seemed a simple free just into added time. From that kickout, Leitrim moved the ball the length of the field and Jack Heslin was left with a simple tap in to seal the victory.

Gary Kelly and Keith Beirne swapped points as Leitrim held on for a famous victory.

Main Man: Keith Beirne gave an outstanding display of placekicking, Jack Heslin, Keith Keegan, Brian Leydon, Niall McGovern and Alan Armstrong all did well but it was the subs Oisin Madden and Dean McGovern who turned his game. McGovern in particular drove Leitrim to victory.

Talking Point: With teams having different criteria for picking their teams, does this competition have a real future? Hard to tell.

Turning Point: For the second week in a row, Galway's Antaine O'Laoi missed an easy free that would have been huge for his team. He missed a chance to tie the scores here and Leitrim went down the field to goal.

Ref Watch: Mayo's John Glavey certainly did Leitrim no harm, particularly when it came to frees but he had an easy job in a match that was open and free-flowing.

Highlight: Three goals from Leitrim were all constructed with lightning moves and clever team-work, a nice sign for the future.

Lowlight: If you were nit-picking, you'd have to say there was no real intensity to this game, a throw-back to less structured times.