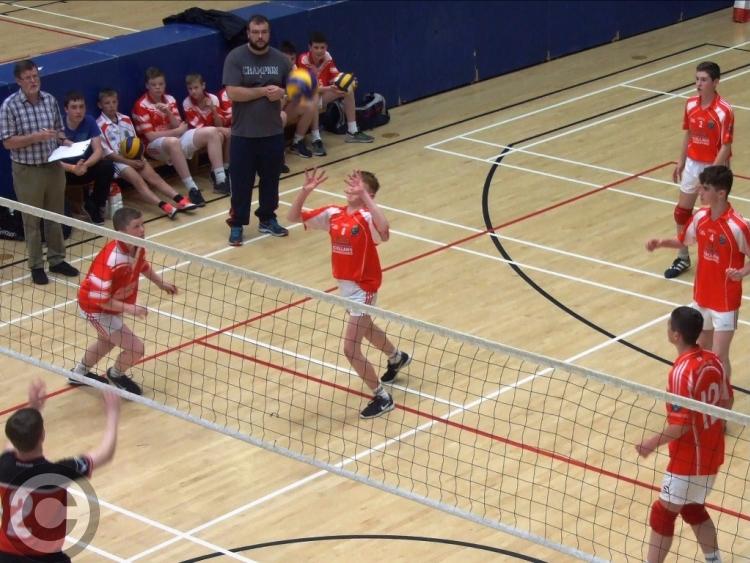 It was a gripping day of volleyball in University of Limerick. In the end, after fighting their way back so many times, Drumshanbo missed out on gold by the narrowest of margins.

In the final, all the odds were stacked against them but still they fought and fought. But first they had their greatest victory, when they overcame, the, at times, stunning Portlaoise team.

This was by far the best Portlaoise college team ever. They were playing in their first ever A semi-final at any age. They had stunned Mallow in the quarters and in the warm-up their serving and hitting was superb.

One of their team had played in the Cadette B final and they were older and physically stronger than Drumshanbo. After a great serving start by Evan Foley to give Drumshanbo a 3-0 lead, Portlaoise won all the rallies and raced 10-5 ahead!

Out of the blue then, on a Portlaoise serve, Barry McWeeney controlled the ball into Shawn Meehan who set for Emmet Moran who hit a spectacular winner. They repeated it and Moran was on fire, blocking, saving at the back and dumping down a winner.

The score narrowed to 9-11. But two more hits put Portlaoise 13-9 ahead. Then suddenly came the Laois school’s first error of the day. Still trailing 13-16, Evan Foley hit an ace, McWeeney whacked down a winner and aced Drumshanbo level at 17-17.

Brendan Gunning hit three aces and with blocking, acing and dumping from Dylan Easterbrook the set was won.

Drumshanbo led 5-3 in the second set and were only caught at 8-8. From there on Portlaoise hit a fabulous patch, hitting and hitting. For a long part of the set McWeeney matched them but they returned with extra power and, despite the entry of subs Ronan Moran and Radoslaw Oberwan, Drumshanbo were left in disarray.

The early third set was again all Portlaoise power and Drumshanbo fell 7-14 despite a mini surge by Emmet Moran. Then, following a disguised dump from Shawn Meehan, two saves by Gunning, aces from Foley, and a block from Easterbrook, Drumshanbo astonishingly drew level at 16.

The tension rose and lose as the teams were level at each score to 24. Portlaoise hit and hit, but on Drumshanbo’s second match point McWeeney hit three spikes in the rally, the third spike putting Drumshanbo in their first Junior final in five years.

It proved to be Mission impossible. In the other semi-final Raphael's had met weak opposition. This meant they could relax and watch half of Drumshabo’s semi-final and study! Then they took the court to rewarm up.

Meanwhile, exhausted Drumshanbo took a break outside in the air. If they did, the Volleyball Association officials did not and Drumshanbo found themselves running in for the National Anthem!

Because of hall booking times in UL, the VAI allowed no warm-up and most of the supporters came back in to find a confused Drumshanbo 0-5 down in the final!

Then tiredness returned, wrong decision were made, handling went off and Raphael's zoomed 11 ahead at 18-7! Ronan Moran came on and he set up Emmet Moran to volley a winner. Drumshanbo’s handling recovered, Raphael's over hit and Gunning served seven in a row to leave it 14-17 and force a Raphael's time-out. Raphael's just held out.

Now fully focused, Drumshanbo were ready at the start of second set and McWeeney spiked the first winner. Errors again allowed Raphael's ahead 6-3 but at 5-7 down Easterbrook went to serve.

With McWeeney saving at the back and Emmet Moran placing winners Easterbrook hit five and Drumshanbo led 10-5! Moran aced and left them 14-10 ahead.

Then, having a brilliant serving record all day to that point and playing well otherwise, tiredness caused concentration to drop and they missed six out the next eight serves, the last leaving it 22-24, match point for Raphaels!

There followed a fabulous rally Easterbrook set up McWeeney who hit three rasping spikes. But Raphael’s tipped down. McWeeney dived and Gunning dived and Moran placed the third ball right into back corner and sent Raphael's scrambling. Raphael's chased it off court and it dropped over to Drumshanbo awkwardly.

Another spectacular dive from Gunning saved the ball again. Finally Raphael's hit out and it was level at 27-27!

Exhausted, that was Drumshanbo’s last point but it a second great performance in a row.