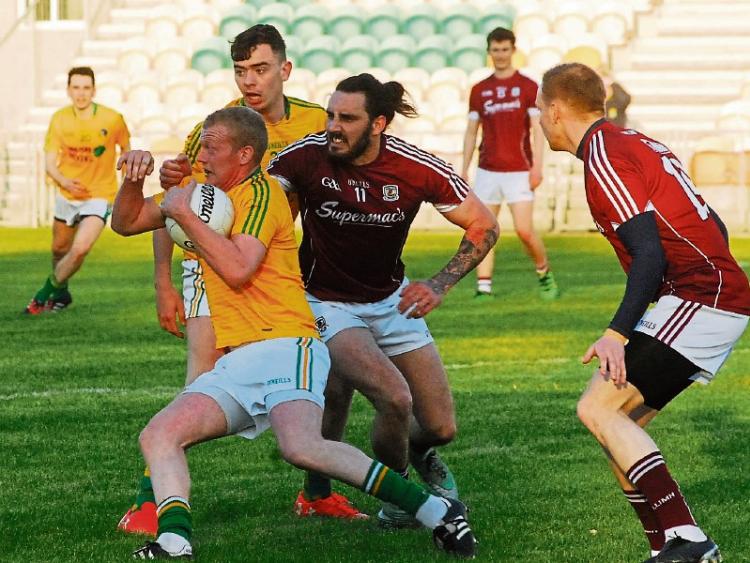 Mohill are the only unbeaten team left in the Dunnes Bar Division 1 after Gortletteragh and Ballinamore Sean O’Heslin’s suffered losses at the weekend.

Gortletteragh’s defeat came at the hands of a rampant Mohill who spelt out their ambitions for the year in no uncertain style as they demolished their neighbours 2-20 to 0-8, a devastating result for a Gortletteragh team who felt they had been building up a good head of steam.

Keith Beirne led the way for Mohill as he landed an incredible 2-10 on the evening as Mohill now stand alone at the top of the table.

Sean O’Heslin’s suffered a surprise first loss when Melvin Gaels took a two point win away from their visit to Ballinamore, 0-15 to 1-10, a win that moves them up to fifth place in the table.

Surprise packets Aughnasheelin are second in the table with a 1-15 to 2-6 victory over neighbours Fenagh St. Caillin’s. They are now a point behind Mohill while Fenagh remain without a win and in the relegation places.

St. Mary’s took a big step out of the relegation zone with an important 1-16 to 1-11 victory over fellow strugglers St. Patrick’s Dromahair, a huge win for the Carrick side.

And Aughawillan got back to winning ways with a comprehensive 3-17 to 1-8 destruction of Allen Gaels who remain rooted to the bottom of the table while Glencar/Manorhamilton had five points to spare over Drumkeerin in a north Leitrim derby.

In Division 2, Ballinaglera suffered their first loss of the campaign when Glencar/Manor had four points to spare at the final whistle, 2-16 to 1-15, a result that leaves Leitrim Gaels top of the table by virtue of a superior scoring difference.

Kiltubrid scored an important win when they saw off Aughavas by eight points, 3-13 to 2-8, while Carrigallen also won their second game with an important 2-12 to 2-8 win over a Bornacoola team in the relegation places.

Drumreilly joined eight teams on four points when they beat Cloone 0-14 to 1-7 in a game marred by serious injuries to two Cloone players.