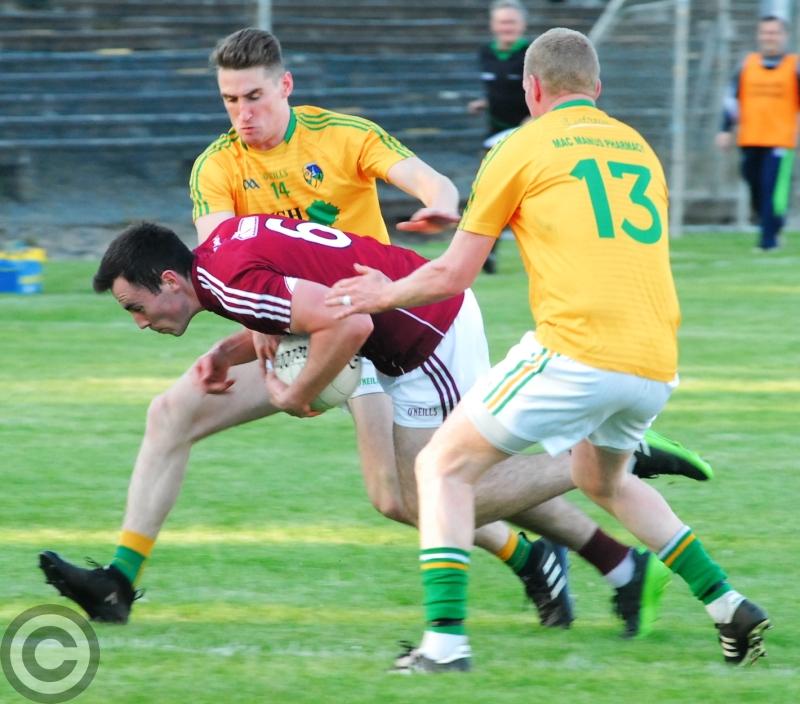 Keith Beirne and Cathal McCrann in action against Galway. Photo by Willie Donnellan

Leitrim face Mayo in this Wednesday’s Connacht Junior Football Championship Final in Charlestown as Senior team manager Brendan Guckian has promised to release as many Senior players as possible for the title tilt.

The Green & Gold will meet the Mayo men in Charlestown (7 pm throw-in) after the Mayo men scored an impressive win over Sligo in the second semi-final last Friday night, a 1-15 to 0-12 victory that was built on a strong second half performance.

The team were level at 0-7 apiece at halftime after a tightly contested first half but Mayo pulled away in the second half with early second half scores from Brian Heneghan and Mark Ronaldson they led for the remainder of the game.

The Mayo win was rounded off with a Barry Duffy goal in the dying seconds which meant they ran out 1-15 to 0-12 winners.

With Senior team selector Seamus Quinn leading the Junior side, many will wonder just how many of the Senior panel will be made available for the Final, particularly with the London game just ten days away from Wednesday.

Philip Farrelly, Alan Armstrong, Noel & Gary Plunkett, Jack Heslin, Keith Beirne, Dean McGovern and Oisin madden all saw action against Galway in the 3-16 to 2-15 semi-final win although it is believed that Dean McGovern may not be available after suffering a knock in a challenge game.

However, Senior team manager Brendan Guckian is adamant that anyone who can play will get the chance to play against Mayo - “Everybody knows you can get injured at training as much as in a game so it will be an opportunity for guys to get game-time. If there is anybody who has any niggle of an injury, they won’t be involved but we won’t be holding back too many lads.”

And Brendan admitted that he really enjoyed the semi-final victory over Galway - “In fairness to them, when they put on the Leitrim jersey, they want to play as best they can and it was no different that evening.

“It was a great to be at because it was such an open game, free-flowing and exciting, it had it all and I thought the lads who are on the Senior panel played particularly well and stood up when they were needed.”

Mayo also have a unique story on their Junior team as teacher John Reilly led a Mayo attack against Sligo that also featured his Our Lady’s Belmullet pupil Ryan O’Donoghue, just one of a few intriguing stories in the Mayo side.

Former Senior star Mark Ronaldson and current Mayo U21 players Barry Duffy & Ryan O'Donoughue will also feature as Mayo’s team is drawn exclusively from Intermediate and Junior clubs in the county and does not feature anyone on the County Senior side.

Mayo have an excellent record at this grade but they will be wary of a Leitrim side that could be peppered with members of the county senior team.

The action gets underway in Fr O’Hara Park in Charlestown at 7 pm on Wednesday, May 17.