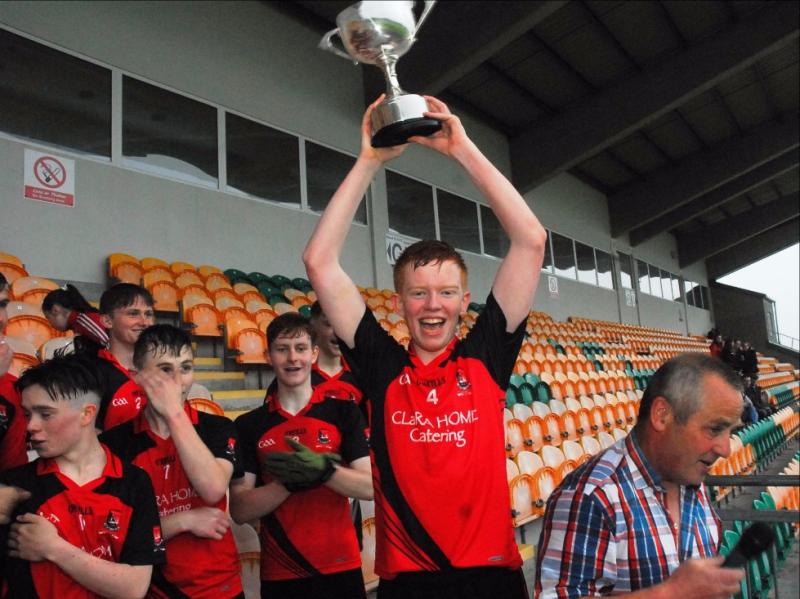 A controversial finish to an intriguing U17 League 15-a-side Final might have overshadowed this game  but there was no doubt that Fenagh St. Caillin's were deserving winners.

The failure to award the Carrick men what looked a definite penalty five minutes from time will dominate the talk from this match but there was no doubt that Fenagh St. Caillin's were the better side on the day.

Fenagh dominated long stretches of this game against a committed and brave St. Mary's and were the better side but you have to say, had St. Mary's been awarded and converted a penalty, then it could easily have been the Carrick men celebrating.

St. Mary’s started brightly but had two wides before Oisin Bohan converted a free on four minutes, a score quickly matched by an Oisin McLoughlin free. But it was the Carrick men making the early running with Mark Diffley pointing a free after a jersey pull on seven minutes.

Diarmuid Kelleher then thumped a 50 well over the bar, an amazing feat given the conditions and St. Mary’s could have been completely in control had Mark Diffley’s shot not hit the post after a long free found him unmarked.

Fenagh started to find their feet and an Oisin McLoughlin free and a well worked Fergal McLoughlin score had the teams level midway through the second half.

St. Mary’s surged again and Diarmuid Kelleher in particular as a powerful run saw his first shot blocked but he grabbed the rebound to score.

It got better for St. Mary’s a minute later when a long free found Oisin Bohan behind the defence and a good run and expert finish found the net to put St. Mary’s four clear.

Strangely, the goal settled Fenagh  and they dominated the rest of the half as Oisin McLoughlin converted a twice taken free, the first went wide but was correctly retaken after a St. Mary’s man stood far too close to the kicker.

Mark Keegan put over a free after a high tackle before McLoughlin added an injury time score to leave St. Mary’s 1-4 to 0-6 in front at the halftime break.

Fenagh should have catapulted into the lead immediately after the break when they broke clear but a weak James Wrynn shot went straight to the keeper while Oisin McLoughlin put a free wide.

A Mark Keegan free on five minutes levelled the scores and they went in front with another Oisin McLoughlin free on eight minutes. Fenagh were dominant but McLoughlin and Keegan both missed frees.

However, they looked set for the win but a Carrick free was intercepted and a great run led to a fine score from Mark Keegan to put them two clear.

Just when it looked as if they were beaten, St. Mary’s responded with two Mark Diffley frees in the space of a minute to tie the scores once more and ending a 28 minute spell without a Mary’s score.

Fenagh's Fergal and Oisin McLoughlin missed chances and St. Mary’s incredibly went back in front when Diarmuid Kelleher scored a huge point from the left corner.

McLoughlin missed a free but the County Minor provided the decisive moment with six minutes left. A poor St. Mary’s pass went over the sideline and a quick move fed the ball to Oisin McLoughlin.

Despite being 50 yards out, McLoughlin took off on a run before, 20 yards out, he fired low from the left hand side of the goal to the bottom right corner, past the despairing dive of Sean Reynolds.

St. Mary’s almost hit back immediately as a fantastic move cut open the Fenagh rearguard and as the ball found Oisin Bohan who was lining up his shot, he was fouled in the large parallelogram.

With everyone expecting the whistle to sound and a penalty awarded, even Fenagh supporters, play continued and Fenagh cleared the lines.

St. Mary’s launched a ferocious fight-back but Diarmuid Kelleher saw a fifty fall short and Oisin Bohan had a bad wide. Aaron Smith had a wide for Fenagh but there was still drama as Fenagh keeper Rian McWeeney made a great save to deny Oisin Bohan a match winning goal over two minutes into added time.

Main Man: St. Mary's had good performers in Mark Diffley, Diarmuid Kelleher, Ashley Mayiza while Eoin McLoughlin, Mark Keegan and Owen McLoughlin stood out for Fenagh but there was no doubting the outstanding player on show was Oisin McLoughlin.

Talking Point: St. Mary's can legitimately point to a penalty that should have been awarded but wasn't but Fenagh were the better team on the day, they just didn't finish off the numerous chances they created. Yet had the penalty been awarded, St. Mary's brave and committed effort might have seen them land the title.

Turning Point: Oisin McLoughlin's goal six minutes from time got Fenagh back in front, a superb individual effort that capped a magnificent display from the midfielder. Barely a minute later, St. Mary's Oisin Bohan appeared to be clearly fouled in the act of shooting and no penalty awarded - two massive swings in the space of a minute.

Ref Watch: Kevin Mallon could have penalised players on either side with a black card on a few occasions but the game will be remembered for a failure to award St. Mary's what looked like a nailed on penalty five minutes from time.

Highlight: Two intensely committed teams going full-blooded in terrible conditions, a tribute to both teams and their commitment.

Lowlight: The conditions didn't help  free-flowing football but the most disappointing aspect was the abuse referee Kevin Mallon was subject to after the final whistle.