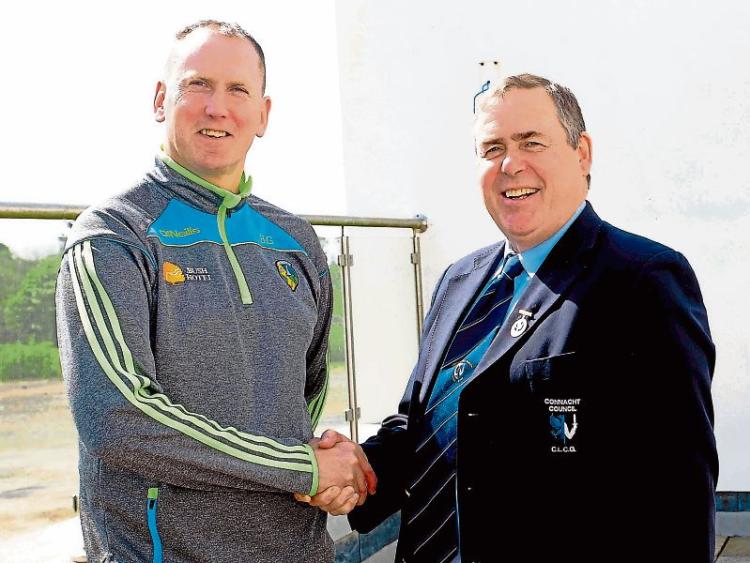 Cliche it may be but Brendan Guckian is determined that Leitrim focus only on London and nothing else, even going so far as to proclaim that he has even thought about who Leitrim would face in the championship if they prevail in Ruislip.

The Leitrim boss was speaking with the press at the launch of the Connacht Championship at the Connacht GAA Centre of Excellence but wouldn’t bite on any hypotheticals about facing Roscommon in a semi-final on June 18.

When one adventurous hack raised the subject of Roscommon in the semi-final, Brendan simply answered “We’re just completely focussing on London. We’re not looking beyond that and even the lads themselves know that, that there is only one focus for us and that is London. Genuinely, I haven’t thought about, not even at the back of my mind.”

Yet the pressure is obviously worn lightly on the Green & Gold boss as, when asked about London’s well sign-posted ambition and expectations, Brendan jokes “You keep pumping that pressure on them! Of course they have expectations.

“We obviously have to focus on our own performance and I do think if we get a performance that the lads are capable of, we are good enough to come out of Leitrim. It is down to ourselves and how we perform on the day.”

If anyone knows the threat posed by the Exiles, it is Guckian as both he and selector Seamus Quinn were members of a Green & Gold team who escaped with a controversial extra-time win in 1997 in Ruislip, a last gasp Declan Darcy penalty giving Leitrim a draw and sending the game to extra-time.

“It (facing Leitrim) will be an extra incentive for London and the effort they have put in over the League shows that but there is no easy time to go to London and I think London have learned that in the past. But again, we just focus on themselves.”

Guckian points to the League meeting between the two teams in Pairc Sean Mac Diarmada in April as proof that London will not be taken for granted by his players - “Absolutely not and I think above all years, that is very much so.

“They had a good League performance, beating Carlow and you saw yourself, against us in the second half, they really threw everything at us and we struggled at times with them. In addition to that, they have one or two extra in on the panel.”

With Leitrim well aware of the addition of Eoin Mulligan to the Exiles ranks, Guckian is well informed about the threat posed by the new players in the London ranks as he described former Dublin U21 All-Ireland winning captain Kevin O’Brien as “massive, massive personality to have around the place.

“I think since Ciaran got involved with them, he has brought a new sense of professionalism with him and he has obviously brought a very professional structure and you can see that it is paying dividends.”

The opening of the new stand in Ruislip will add to the occasion on Sunday and Brendan is hoping it may add a little more pressure for Ciaran Deely’s side - “I saw pictures of it and it looked fabulous, a new stand. It is very much a tight enclosure but the surface looks fantastic and it is a massive day for London GAA and we won’t want to get caught up in it. We will try not get sidetracked by it, obviously focus on ourselves.”

His team likely to have a lot of young debutants on the team next Sunday but Brendan has fierce belief in Leitrim’s young players - “The young guys are responding well, they are fearless which is what I like about them, they’ll go at it.

“Which is a great attitude and going back to the U21 game against Galway, the first half was obviously very disappointing but the way they played in the second half, they showed that they can compete with anybody on their day.

“So you’d be hoping that there would definitely be a few involved on the first day of the championship. The lads get on very well together, the experienced lads are really helping the younger lads sort of break into the panel.

“But having said that, there is 13 new faces on the panel compared to last year so it is a big change for a lot of guys.

The loss of National League top scorer Emlyn Mulligan is a body-blow for Leitrim as, before the news of his cruciate injury broke, Guckian described the Melvin Gaels clubman in glowing terms.

“Emlyn is a natural leader, I have to compliment on the way he trains, his commitment, his attitude and even the way he, minds is the wrong word, but he looks out for the younger fellows which is great, having the likes of him, Gary Reynolds and Ronan Gallagher, the older lads there to help on the younger lads.

Mark Plunkett looks like he could miss out but Brendan is hopeful the young Aughawillan man will be involved later in the campaign - “Mark is sort of our of action at the moment, he is an important part of the team.