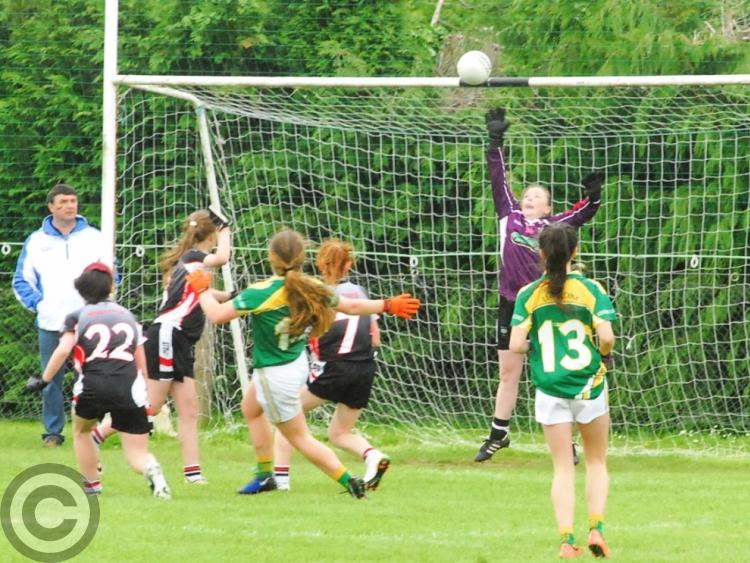 A thoroughly efficient and well drilled Leitrim stormed to victory in the Connacht U14 B Final, avenging their round robin loss to Sligo in spectacular fashion.

Leitrim, expertly coached by Jerome Quinn, Liz Hargaden Ward and Marian McKeon, opted to play with the strong wind in the first half at the splendid Ardcarne Park and made every use of the wind as they led 0-11 to 0-2 at the halftime break.

The second half saw a determined Sligo  mount a fightback but with Player of the Match Muireann Devaney leading from the front, Leitrim struck for three second half goals that sunk Sligo's challenge there and then.

Leitrim just had too much solidity in defence and guile in attack as Siomha Quinn and the excellent Riona McKeon really stood out for an impressive Leitrim.

Leitrim started as they meant to go on as Shaylyn Ward was unlucky to see a great shot crash off the crossbar. Muireann Devaney opened the scoring from a free before Anna Hazlett also saw her shot hit the crossbar, going over for a point.

Leitrim were ripping Sligo apart and Shaylyn Ward, Olwyn Moore and Riona McKeon all added points in less than two minutes to give the Green & Gold a great early advantage.

Sligo opened their account with a Laura Oates point on 11 minutes but Leitrim were in no mood to surrender the advantage, Olwyn Moore pointing when she could have gone for goal.

Devaney swapped points with Cathy Harrison but Leitrim finished the half with four unanswered points, all the result of great team-work and incisive moves. Riona McKeon scored a brilliant point on 22 minutes before Anna Hazlett got on the mark.

Olwyn Moore got her third of the half in added time and Sarah Reynolds finished off a busy first half with a good point after good work from Emma O’Connell and Devaney, leaving Leitrim 0-11 to 0-2 in front at halftime.

Sligo had the wind in the second half and it seemed as if they were going to mount a comeback as Harrison converted an early free and Leah Duffy fired over. But the Yeats women had no luck as Scanlon and sub Ciara Henry both saw shots hit the woodwork while they also missed frees.

They were made pay as Muireann Devaney’s long range pass to Shaylyn Ward split the Sligo defence, an off-load to Riona McKeon should have ended in a goal but the Kiltubrid girl’s shot cannoned off the crossbar but the busy Sarah Reynolds  gathered the rebound and blasted to the net.

Barely had Sligo registered the shock to the system and Leitrim had the ball in the net again. This time, Riona McKeon’s brilliant run and pass cut through the defence and Ward finished expertly for a game killing goal.

Leah Duffy swapped points with Devaney before Sligo raised a small cheer when a long free to sub Henry caught the Leitrim defence out, a pass inside finding Keela Scanlon who drilled the ball to the net.

Leitrim keeper Niamh McDonagh made a good save to deny Henry a goal with Harrison converting a free but the victory was complete when Muireann Devaney soloed through the defence and blasted an unstoppable shot to the Sligo net.

Devaney finished up the scoring as a comfortable Leitrim celebrated Connacht success once again.

GAMES AT A GLANCE

Main Woman: Leitrim had a lot of heroes in this game from the superb Rachel Reynolds and Niamh Morahan in defence, Siomha Quinn in midfield and outstanding attackers ShaylYn Ward, Riona McKeon and Olwyn Moore but Muireann Devaney again stood head and shoulders above, although Riona McKeon was almost as influential.

Talking Point: Strange to see a Leitrim team that contested an 'A' Final just a matter of weeks ago win a B title.

Turning Point: Backed by the wind, Leitrim led 0-11 to 0-2 at the break but Sligo started the second half in determined fashion and were pinning Leitrim back. However, two goals in the space of a minute killed Sligo's challenge stone dead.

Ref Watch: Turlough Bruen did an excellent job, implementing the rules of Ladies football correctly and letting the game flow.

Highlight: Individual displays were top class but what really stood out with this team was there were no weak links. Leitrim were well organised, disciplined and willing to work their socks off for each other - this team can go a long way.

Lowlight: None from a Leitrim point of view but if you really wanted to be picky, and you'd have to try hard, perhaps Leitrim should have taken a few more goals as they hit the crossbar three times and took points when goals were on.