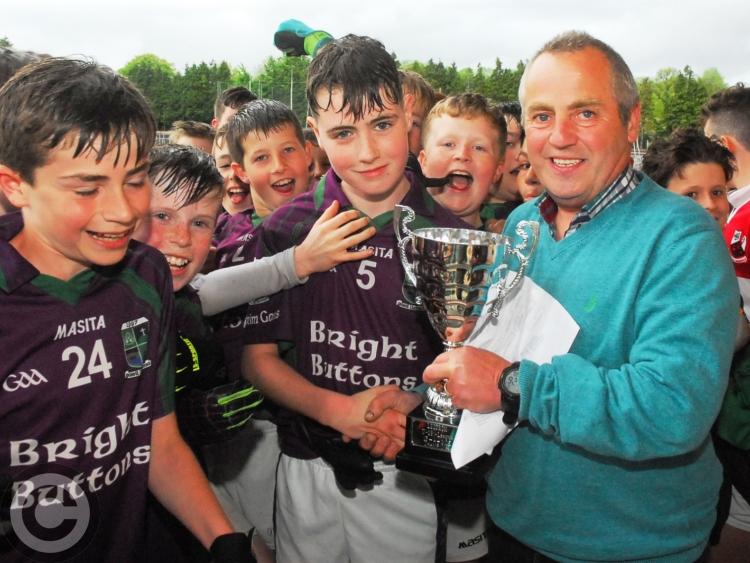 Leitrim Gaels may have been comfortable winners of this title but they were still glad to have an excellent keeper in Brian Cull to keep a determined Annaduff at bay.

The Barna Recycling U13 League 13-a-side Final featured two fully committed teams in Pairc Sean Mac Diarmada but Leitrim Gaels' edge in physical strength and their better overall balance throughout the field ensured the title would be heading to Leitrim Village on Friday night.

Brian Goldrick and Conor McLoughlin were always dangerous in attack while Dhani Keane, Liam Chandler and Paddy Keane stood out for their workrate and power but when they needed a little extra, it was keeper Brian Cull who came up with some outstanding saves in very difficult conditions.

Leitrim Gaels started  impressively and a nice chipped point from Dhani Keane got them off the mark inside the first minute. Michael Connolly added a point three minutes later as Annaduff missed a succession of good chances while Niall Quigley saw a shot batted off the line by a defender.

Robbie Casey increased the Gaels’ lead with an impressive “50” but Annaduff opened their account when Niall Quigley put over a free on 13 minutes. The game moved up a gear when Brian Goldrick’s superb pass found Conor McLoughlin and his excellent finish found the net as Leitrim Gaels seemed in total control.

But Annaduff hit back in style as Cian Dockery brilliantly fisted a high ball to the Gaels net on 18 minutes.

However, it was the Gaels who dominated the rest of the half with Goldrick firing over a fine point before his fisted shot from a long ball struck the post and Jamie Rynn reacted best to fire the ball off the keeper and into the net.

Annaduff came out fired up for the second half but despite a great Senan Mooney score from a tight angle in the first minute, it was Leitrim Gaels who missed the better chances as Dhani Keane saw a shot hit the crossbar.

Brian Cullen made a great save from a low dipping shot but was penalised for over-carrying, Tommy Taylor converting the free but any hope Annaduff had was extinguished a minute later when sub Dermot Daly’s long ball was expertly fielded by Brian Goldrick and his cool finish resulted in a goal.

Annaduff kept battling with Darren Cox putting over two frees but they couldn’t get the goal they need, Cull making a great save from Adam Maxwell before Dhani Keane scored a nice point on the run.

Cull made another good save from Darren Cox and the game finished with Daly and Darren Cox swapping late points as Leitrim Gaels held on for a comfortable victory.

Talking Point: With the changes in population in the county and the growth in a few key areas, these two clubs are likely to see a lot more County Finals in the years ahead and, if they keep up the great work they are doing now, they should have a major impact at adult level in the future.

Turning Point: Hard to pick between Brian Goldrick's excellent goal for Leitrim Gaels, the third for the winners and a series of wonderful saves from Brian Cull that denied Annaduff the goals they so desperately needed.

Ref Watch: Patrick Guckian did a good job in difficult conditions, kept up with play and kept a tight rein on the contest.

Highlight: Annaduff's refusal to give up as they battled to the end was matched by Leitrim Gaels' fantastic work-rate and organisation  which meant they always looked comfortable.

Lowlight: Not too many, perhaps the slippery and wet conditions that stopped both teams from displaying their full talents.