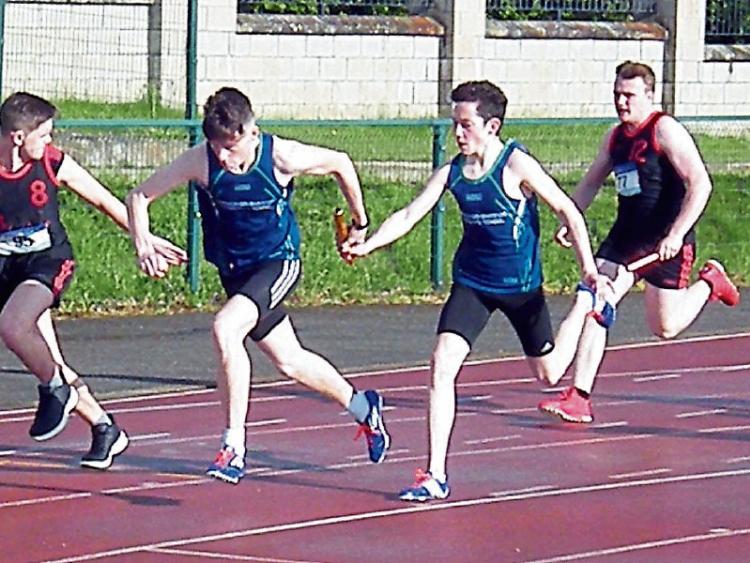 Carrick Community School's Oisin O'Dowd hands the baton over to his brother Fiachra in the Senior Boys relay at the Irish Life Health Connacht Schools Track & Field in Athlone.

Leitrim schools provided two gold medalists in St. Clare’s Lara Mulvaney Kelly and Ballinamore CS’s Katie McNulty where there were a succession of qualifiers for the All-Irelands in the sprints, 1,500m and field events.

The top two in the sprint events and top three in all other events qualify to compete in the All-Ireland Schools in Tullamore on Saturday, June 4.

The big surprise of the came in the Inter Girls 3,000m where debutante Katie McNulty won gold in an impressive 11.30.4. In a race run with the Senior girls, Katie started conservatively but came through the field impressively to beat all but the top two in the Senior race, finishing 44 seconds clear of second.

The throws also saw a medal for Drumshanbo VS as Emma Heeran threw 7.54m to take third in the Inter Girls competition while Daniel Bosquette of Carrick CS finished fifth in the Junior Javelin.

Mohill Community College’s Eoin Gaffey brought home a bronze medal from the Inter Boys walk as he finished third in a time of 10.40.81.

His schoolmates Alannah McGuinness and Sibeal Reynolds also claimed medals, Alannah taking a good second in the Inter Girls 100m despite suffering from a knee injury while Sibeal won bronze in the Senior 100m and just missed out in the 200m, pipped for third by her clubmate Kasey Bruen of Carrick CS.

Bruen also finished in the Senior 400m while Ballinamore CS’s Kyle McNabola had the agony of twice finishing fourth in the Senior 200m and 400m, by times by a matter of inches with clubmate Fiachra O’Dowd fifth in the 200m.

Carrick AC showed impressive strength in the sprints as apart from Reynolds & McGuinness, Sophie McCabe and Toyosi Fagbo both won silvers in the Minor 100m, Oisin Kearney was a very close second in the Junior 200m with clubmate Evan Corcoran close behind.

St. Clare’s had success in the hurdles with Erin Somers (Minor Girls) & Darragh Mitchell (Junior Boys) both third in their events while Cormac Fahey, in the colours of Summerhill Sligo, took second in the high jump.

The 1,500m races also saw some excellent performances with Ellie O’Rourke of Ballinamore CS smashing her pb to take second in a close Junior Girls race with St. Clare’s Sarah Brady claiming the bronze in the same race.

Carrick CS’s Lauren Reynolds fought hard to claim bronze in the Minor Girls 1,500m while there was heartbreak for Drumshanbo’s Anna Corcoran (Inter) and Carrick CS’s Iarlaith O’Brien (Minor) who both finished fourth after excellent runs.

In the relays, Carrick CS’s Minor Girls team of Sophie McCabe, Lauren Reynolds, Aoibhinn O’Dowd and Katelyn Gannon were an excellent second but there was heartbreak for the Carrick CS Junior and Inter Boys teams who both finished fourth in their races.

In the Ulster Schools Finals, North Leitrim’s Niamh Carolan finished eighth in the Minor Girls 800m in a strong time of 2.32.