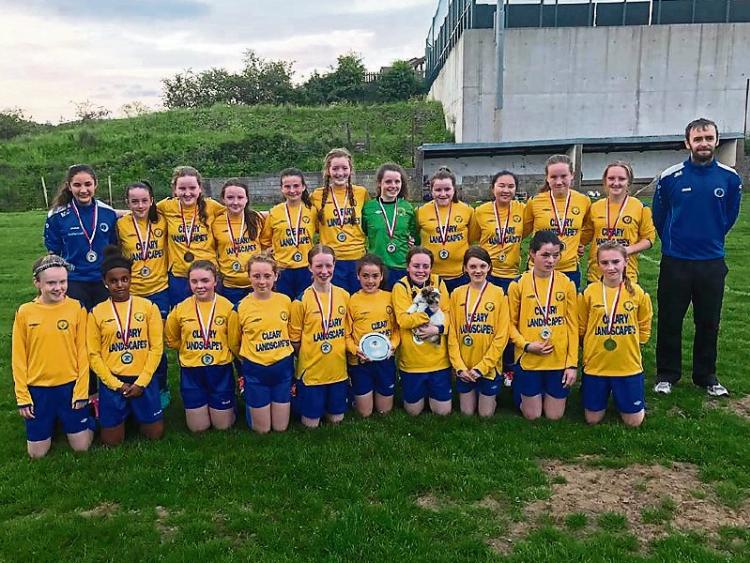 The Manor Rangers U14 girls team who defeated Calry Bohs in the Sligo/Leitrim Shield final are pictured after the game with team manager Jamie Murphy.

Friday last proved to be a memorable occasion for all associated with Manor Rangers as the girls U14 team defeated Calry Bohs to claim the Sligo/Leitrim Shield but only after a pulsating final in the Bee Park.

It was a game that had everything. Loads of drama, cracking football and some outrageously good solo and team plays.

In front of a large home and away support, referee John Barry got the game underway. In an evenly contested first half there were chances for both teams but neither side was able to break the deadlock and the half finished scoreless.

After a scoreless opening half, Muireann Devaney put Manor ahead early in the second half with a contender for goal of the season in any league. She took off on an incredible run, beating seven players and looked to have run out of room to get a shot away but somehow she swung a great shot low into the bottom corner through a melee of players.

Calry had a great chance shortly after but a superb last ditch tackle from Muireann averted the danger.

Calry had a good spell and equalised shortly after and then took the lead through some nice football.

Manor pushed and probed as they looked to get themselves back in contention but it looked like it was going to be Calry's day until Muireann was put through by Erin Somers and she hit the net with two minutes left on the clock to level matters.

Extra time came and Manor again found themselves behind with Calry scoring early in the first period of extra time. The Manor girls to their credit never gave up and Muireann got her hat-trick in the second half of extra time.

Sarah McGloin was outstanding in the Manor goals and made a number of crucial saves that defied her young age.

With the game heading to penalties Muireann Devaney struck a shot which was deflected out for a corner. For the first time in the game Muireann decided not to take the corner and Emily Conlon stepped up to the mark.

Three Calry players followed Muireann in the penalty box and as she moved out Emily swung in a brilliant corner kick which sailed into the net to put Manor 4-3 ahead.

Manor held on until the end for a cracking victory. Manor's back line of Ailish Victorino, Maeve McMorrow, Muireann Cullen and Helen Verachtert were immense all evening.

Roisin Keegan O'Rourke and Erin Somers playing up front terrorised Calry's defence and created the openings for some of the goals. Jamie Murphy made a number of substitutions at different stages which saw Cliodhna Boylan, Shauna Sheridan, Rebecca Darcy, Shauna Clinton, Aine McLoughlin, Aoife Maguire, and Kallie all play their part.

Lauren Devaney and Anna Devaney (both U12 players) didn't manage to get on but answered the call and played their part through encouragement at the side.

Several players could be nominated on the Manor team for player of the match but today was a huge collective effort and that includes the support at the sideline but the player of the match has to go Manor goalkeeper Sarah McGloin who kept us her side in the game with several fine saves when they were under huge pressure.