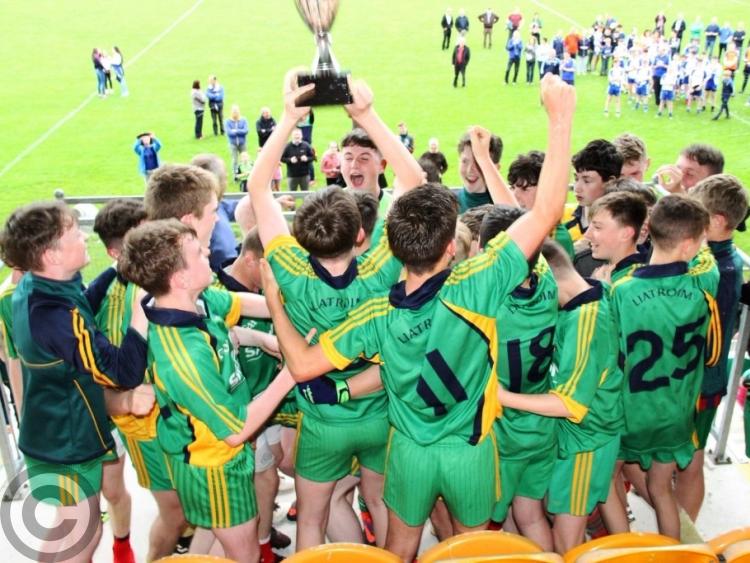 Last Monday evening's U-15 League 15-a-side Final proved to be a thriller of a contest between two evenly matched teams with the Ballinamore and Kiltubrid amalgamation of Cill Mhor Gaels emerging victorious, but only just.

Excellent point taking, last ditch defending, point blank saves and a fine display of kick passing were all features of an absorbing final which was played in ideal conditions on a pristine playing surface in Pairc Sean Mac Diarmada.

The game began with Cill Mhor Gaels signaling their intent straight from the throw-in. James Honeyman, Paul Moran, Barry McWeeney and Danny McWeeney were all involved in a free flowing move that was brought to an abrupt end and the resulting free was converted by Michael McKiernan.

The lead was soon doubled when a nice pass from Paul Moran found James Honeyman and the midfielder beat his marker with a drop of his shoulder before slotting the ball over the bar.

St Mary's soon got the opportunity to show how dangerous they can be. Gavin Reynolds and Kyle McCrann exchanged passes as they carved through the Cill Mhor Gaels defence and when the ball was worked to Ethan Bohan, the corner-forward made no mistake.

Moments later St Mary's looked destined to take the lead but were denied by a wonderful save from Aidan McCormack. Fortunately for St Mary's, referee Patrick Guckian had spotted a foul on Ashley Maizia and when no advantage arose he brought play back for a free which was converted by Cian Singleton.

Points in quick succession from Conor Hackett and Andrew McKenna gave St Mary's a two point advantage but Cill Mhor replied immediately with points of their own from Euan McManus and Mark Lowe.

The end to end nature of what was developing into a gripping contest continued with points from Andrew McKenna cancelled out by a wonderful long range score from Cill Mhor's James Honeyman after a wonderful pass from Eoin Curran.

St Mary's edged back in front when Cian Singleton converted a free after he was fouled but that was soon cancelled out by a Paul Moran point after good play involving Senan Harte.

After a hectic opening 17 minutes, it was perhaps hardly surprising that the tempo dropped slightly for the remainder of the half with Cill Mhor edging back in front courtesy of points from Paul Moran and Barry McWeeney.

Leading 0-8 to 0-6 as the second half got underway Cill Mhor quickly extended their lead after the restart with Barry McWeeney pointing under huge pressure before James Honeyman pointed with the outside of his boot.

St Mary's refused to throw in the towel and came roaring back and can consider themselves very unfortunate to have come up against Cill Mhor goalkeeper Aidan McCormack in top form.

Goalbound efforts from Kyle McCrann and Gavin Reynolds were both brilliantly turned over the bar within a minute of each other.

Cill Mhor quickly hit back with points from Barry McWeeney (free) and Paul Moran before the gap was brought back to two points once more with pointed frees from Cian Singleton  and Andrew McKenna.

Pointed frees from Ethan Bohan and Barry McWeeney meant with just seven minutes remaining there was just two points between the sides.

With five minutes remaining the gap between the sides was reduced further with Gavin Reynolds pointing for St Mary's.

However, Cill Mhor Gaels were able to just about keep their opponents at arms length and re-established a two point lead when Barry McWeeney rose well to make a fine catch before pointing.

Mark Lower replied with a St Mary's point meaning there was just a white flag separating the sides with a minute remaining.

However Cill Mhor were not to be denied and secured victory with late points from Paul Moran and a booming effort from Senan Harte.

Main Man: A very difficult task choosing just one player. Gavin Reynolds, Ethan Bohan and Cian Singleton were all excellent for St Mary's while Eoghan Shanley, Senan Harte, Barry McWeeney, James Honeyman and Paul Doyle shone for Cill Mhor Gaels. However, the vote goes to Aidan McCormack. The Cill Mhor goalkeeper was outstanding in all aspects of his performance.

Talking Point: Cill Mhor appeared to score a goal when Barry McWeeney's powerful shot crashed off the crossbar and came down. From the press box it appeared the ball crossed the goalline and the umpire closest walked to the opposite goal post to pick up the green flag. The referee waved played on and fortunately it had no bearing on the result.

Turning Point: Seven minutes into the second half, with four points between the teams, Aidan McCormack made a stunning, full-length diving save to deflect Kyle McCrann's shot over the bar. Less than a minute later he produced another outstanding save to deny Gavin Reynolds.

Ref Watch: Patrick Guckian  let the game flow where possible. His interpretation and use of the advantage rule helped provide the conditions for what developed into a thoroughly enjoyable game.

Highlight: The variety and accuracy in the kick passing displayed by both sides was refreshing to see.

Lowlight: Tough on St Mary's to suffer defeat having contributed so much but there were few other lowlights in what was a classic encounter.