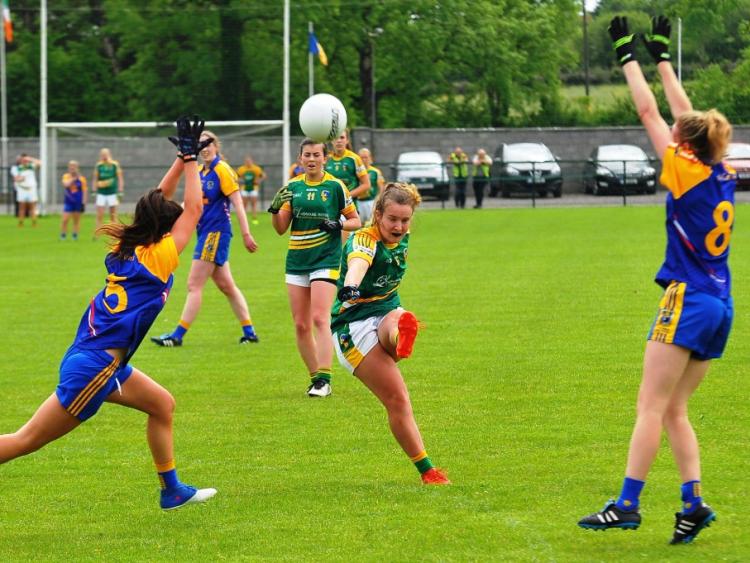 Ailbhe Clancy fires over a point for Leitrim. Photo by Declan Gaffney

Just like the Men's team in London, a brace of goals in quick succession proved to be the difference as the Green & Gold Ladies fought off a strong and determined challenge from Roscommon to keep their championship dreams alive.

Leitrim had to win to keep their championship hopes alive after their first outing defeat to Sligo and for a long time last Sunday in Kilglass, it looked as if they were going to fail in their mission as Roscommon dominated long spells of this contest.

It wasn't the best Leitrim display and there is a hell of a lot to work on but it was a resilient one and when you have the spirit to keep fighting that Leitrim showed in Kilglass, it is more than half the  battle.

Leitrim will rightly worry about a defence that is being exposed far too often and the return of Anna Conlan, on the sideline last Sunday as a water carrier, would be a huge boost in that area.

Laura O'Dowd and Michelle Heslin made a huge impact when introduced and must be pushing hard for a starting spot in the next game.

Both sides opened with poor wides before Tara Taylor scored a nice point from a tight angle for Roscommon while Alice Kelly blazed a goal chance wide across the Leitrim goal.

Leitrim took the lead with points from Ailbhe Clancy and Roisin McHugh but the Green & Gold continued to live on the edge as Natalie McHugh blazed a goal chance wide while there were wides for Jenny Higgins, Joanne Cregg, Laura Fleming and Rebecca Finan.

Halfback Aisling McAuliffe’s impressive run half the length of the field ended with a point before Jenny Downey pounced on a poor kickout to point on 16 minutes.

Leitrim’s woes saw Roisin McHugh stumble when it looked as if she was put through by Aine Tighe but Tighe did close the game with a fine point on 19 minutes.

Jenny Higgins pointed after a pass from McHugh and the Roscommon forward scored a wonderful goal on 29 minutes when she gathered a long ball into the corner and unleashed a ferocious shot that left Michelle Guckian helpless in the Leitrim goal.

Crucially, Leitrim did finish strongly with two Ailbhe Clancy points, one from a free, to leave Roscommon 1-4 to 0-5 in front at the break.

Sub Laura O’Dowd was desperately unlucky not to goal when Roscommon keeper Rachel Corcoran made a point blank save, Aine Tighe seeing a follow-up goal disallowed for throwing the ball into the net.

Roscommon took control with points from Rebecca Finan and a McHugh free but sub Michelle Heslin pointed after a Roisin McHugh interception but the score was cancelled by a Jenny Downey point.

Laura O’Dowd pointed on 12 minutes to leave the gap at a goal but Leitrim were not winning every Roscommon kickout and despite some poor wides and Michelle Heslin firing across the goal, two Aine Tighe points reduced the gap before Carla Le Guen and Clancy combined to set up Michelle Heslin for the equalising score.

Leitrim went in front with a Clancy point on 18 minutes but Roscommon showed real resilience when McHugh converted two frees to go back in front with less than four minutes to go.

Leitrim hit back again with a Clancy free but a strong run from Amanda McLoone  led to another McHugh point in the last seconds of normal time.

But Leitrim weren’t finished and as the game went into added time, Laura O’Dowd hit the point of the day, a superb long range effort that tied the scores. From the kickout, Leitrim pounced and Ailbhe Clancy scored a brilliant effort, rounding the keeper and firing back from the left side to the right corner.

Roscommon were stunned and Leitrim struck again, Michelle Heslin’s delivery finding Aine Tighe for a close range goal and a famous and much needed victory.

Main Woman: Ailbhe Clancy and Aine Tighe were in outstanding form  but this game turned on the introduction of Laura O'Dowd and Michelle Heslin who made a huge difference to Leitrim and drove them to victory while Michelle Guckian, Deirdre Ward and Eimhin Quinn performed well. For Roscommon, Aisling McAuliffe, Jenny Higgins, Amanda McLoone and Natalie McHugh stood out.

Talking Point: Leitrim must now wait to see if they qualify for the final. A Roscommon win over Sligo would mean a three-way tie again but even a point for the Yeats women would mean a Leitrim and Sligo meeting in the Connacht Final. Leitrim can only wait to see what happens.

Turning Point: The introduction of Laura O'Dowd and Michelle Heslin was enormous as it gave Leitrim huge energy, got them running at the Roscommon defence and turned the game on its head.

Ref Watch: Galway's Shane Curley had a reluctance to use yellow but did a good job, let the game flow and was consistent in his application of the rules.

Highlight: Tough choice here - Ailbhe Clancy scored a brilliant rocket of a goal to put Leitrim in front but the score of the game had to be Laura O'Dowd's fantastic long range point that tied the scores seconds earlier.

Lowlight: The first half was incredibly disappointing from Leitrim's point of view and had Roscommon taken half their chances, Leitrim would never have been able to get back on terms.