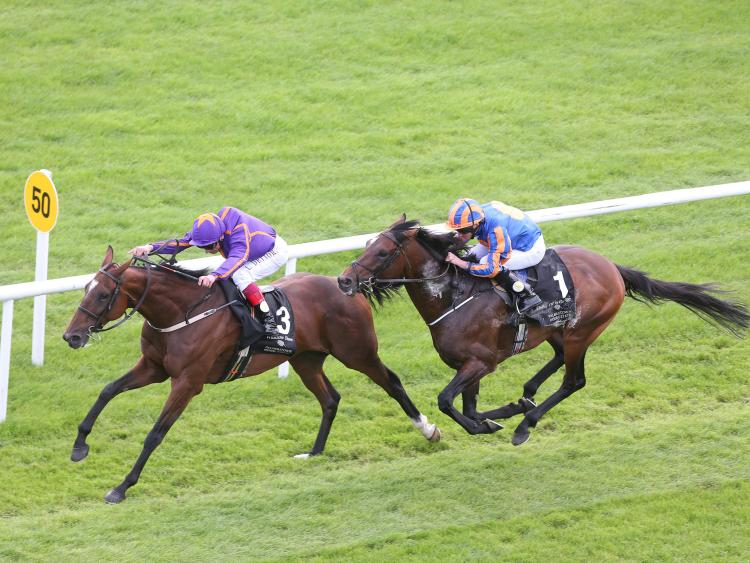 A massively competitive renewal of this race, billed as a match between the sizable contingents from both the Aidan O'Brien and John Gosden yards. Between them, Gosden and O'Brien train 11 of the runners in this, and both have runners at the head of the market. CLIFFS OF MOHER for O'Brien and CRACKSMAN for Gosden are 4/1 co-favourites, with Ryan Moore and Frankie Dettori taking the rides respectively. CRACKSMAN is unbeaten in two starts, while CLIFFS OF MOHER has won two out of three starts, only failing to get his head in front on debut. However, away from the prominent pair, PERMIAN (10/1) makes plenty of appeal for Mark Johnston. He is a trainer in form and this horse was just edged out by CRACKSMAN here in April. Johnston's runner has gone from strength to strength since, winning his two subsequent starts, and is absolutely thriving with each visit to the track. His win in the Dante at York was his best to date and he will show further improvement with William Buick aboard. At a nice each-way price, he gets the nod.

The 15:00 race at Navan on Saturday is a competitive 1M 5F handicap where the Johnny Murtagh trained CHOCOLAT NOIR (16/1) looks an interesting prospect off a relatively low weight. This one carries just 8st 9lbs under Shane Foley and comes into the contest on the back of a good second recently. He was just two lengths behind ZAMIRA when the pair clashed at Roscommon in May, and that rival has gone on to win at a higher level since. That gives Murtagh's charge a good chance on the good to yielding ground in Meath. MYDOR is still possibly well treated for Tony Martin but he's been on the road a long time now this season and can be opposed, while CLINICAL APPROACH catches the eye among the others. He won on debut at Dundalk last month and so is one of the least exposed in the field, but race experience might just be enough for the selection to win the day.

Willie Mullins enjoys bringing horses to Kilbeggan over the summer and one of particular interest on Sunday is KOLUMBUS (2/1) in the opener on the card at 14:20. He's been massively frustrating since winning in April 2016, having finished as the runner-up on three occasions since. That level of consistency seems to have abandoned him of late as he finished sixth and was pulled up on his two most recent starts, but he still stands out in this field. His last run came here in April when he made a bad mistake at the first flight and never recovered, folding tamely before being pulled up by Willie's son Patrick. He is tentatively forgiven for that run and with a four-pound claimer booked for Sunday's race, he's been given every chance by connections to get back to winning ways. TREASURE CHEST, a newcomer for Joseph O'Brien requires a market check, while JACOBS WELL is also prominent for in-form trainer Andrew McNamara.

PHIL'S MAGIC (8/1) is one that retains plenty of ability and if the good in the going holds out until Sunday, he'll have an excellent chance under three-pound claimer Donagh Myler. He's been fourth on his three latest starts, the most recent of which came at Killarney when he came home 16 lengths in arrears to AUVERGNAT on soft ground. The drier surface in the 16:50 race on Sunday will suit him considering his excellent 2015 form, and with signs of late suggesting he's recapturing some of that spark and trainer Tony Martin sticking with him, I'd give him a great shout of running into the money. THOMOND (4/1) and THE GATECHECKER (9/2) rate best of the rest, while MTADA SUPREME (12/1) is capable of springing a bit of a surprise under a seven-pound claimer.