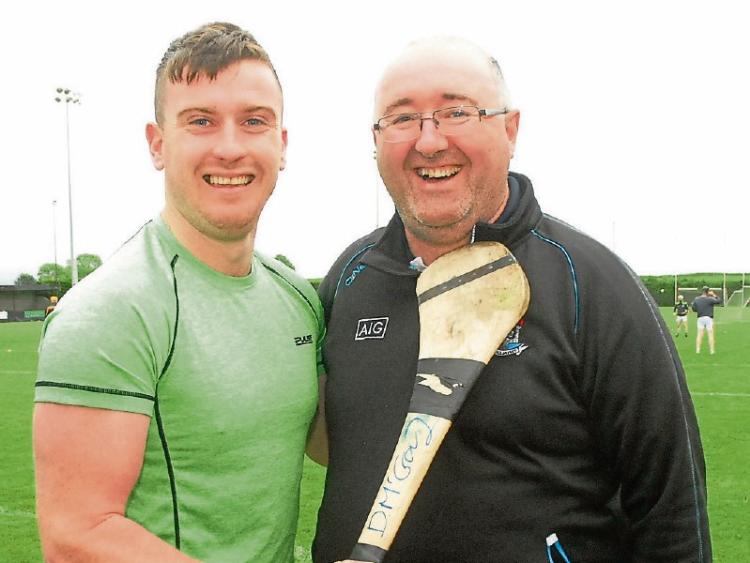 Leitrim, Dublin and Croke Park. You may automatically think of 1994 but for David McGovern, next Saturday's Lory Meagher Cup Final is a very special day for a self-confessed Leitrim Dub.

The son of Noel McGovern and Mary Kilkenny from Mohill, David hails from the St. Peregrines club in Blanchardstown but there is no doubting that although his roots are in the capital, his heart belongs to Leitrim.

“I’ve never put on a Dublin jersey in my life, I always classed myself as Leitrim,” David told the Observer when we visited training in Tubber in Offaly ahead of the Lory Meagher Cup Final and it is clear it is more than mere words for the tough tackling utility player who had lined out with the hurlers since 2010.

“Dad is from Mohill, Mam just outside Mohill, she was down at the Lancashire game, they all come down, my sister as well. They got their picture in the Leitrim Observer a lot over the last few weeks.

“I always supported Leitrim growing up, I played with my club St. Peregrine’s in Blanchardstown, I played U21 football and a few lads came from that and Kevin Glancy was the hurling manager at the time and he asked me would I come out for the hurlers.

“We had a game up in Down at the time and they had nowhere to train so they came out and trained in St. Peregrines, that was my first experience with Leitrim hurling in 2010.”

As an outsider, David brings a different perspective to hurling with Leitrim and admits that it was often frustrating - not because of anything missing but frustrating from the sense that he is very aware of the potential in the Green & Gold ranks.

Getting over the line has often been a battle but David points to the influx of new players this year - “Definitely more belief and the younger lads coming through over the last couple of years, Karol McDermott, Gavin O’Hagan and a lot of the Manorhamilton boys and the Moreton brothers, they’ve added a bit of steel to the team which was needed.

“There is a lot of lads like Vinny McDermott and Clement Cunniffe playing a long, long time so they really added to it. There is a really good blend in the team, everybody gets on very well and look forward to coming to training, matches and the odd night out after a match.”

“But I think that is where Michael Coleman has really driven us on. Every year, it seems like we might have a bad first half and then come into the second half and we’d be left thinking we could have beaten these lads and the exact same thing would happen the following year.

“No self-belief at the start of the year and at the end, we lost to a team by a point and they are after going on and winning it and that was very frustrating. And then we’d go away for six months and wouldn’t see each other again.

“At the start of this year and last year, we said we’d put in the effort. We know we are as good as the teams that are in the competition, it is a really good structure and we’ve gone out and proved it. Last year we were really unlucky, this year we got over the line thank God.”

Leitrim’s crucial victory over Sligo was a huge statement for this Leitrim side but David is determined not to rest on the team’s laurels - “The first week was relief at just beating Sligo and getting Croke Park. But then it has been settling since that the Sligo game was not a final, we have a job to do.

“And any sort of publicity we can get to get young lads and young girls in Leitrim to get a hurl in their hand, to get them out and improve and every couple of years have players coming through to play on the team. The lads who are around now aren’t going to be around forever, there is lads well into their thirties.

“Hurling for me is the best game in the world, I love playing it, these lads love playing it and just because they were born in Leitrim doesn’t mean they shouldn’t get the chance to play it.”

And David has appealed to every Leitrim GAA supporter to make an effort to cheer on the hurlers in Croke Park despite the low numbers that traditionally attend the county hurling games - “It was great to see the fans at the Sligo match because at club games at St. Peregrines, we’re an intermediate club in Dublin, we have a great turnout at our games.

“It is just not the tradition in the county, people don’t go and support the hurlers as much as they should but it has picked up in the last few years. The Sligo game was a great atmosphere, the crowd was on top of you and you can notice the crowd behind you when you’re playing rather than an empty Brewster Park where there are a few Fermanagh supporters.

“You can really feel that support and we appreciate people coming out because we know it is not easy with commitments and everything but we need that support and hopefully, everyone will be there in Croke Park with the Green & Gold flags.”