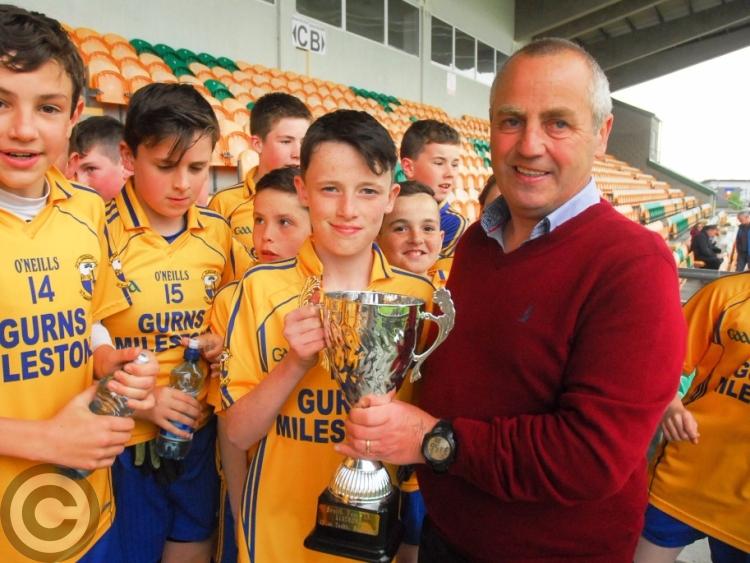 Greater strength in depth and greater strength of player told the tale as Glencar/Manorhamilton cruised to an expected win in the U13 League 15-a-side Final.

The north Leitrim lads have been completely dominant all year, winning their games by an average of 21.5 points in the group stages. But they were made work hard by a valiant but over-powered St. Brigid's side.

St. Brigid's had a few outstanding players but they could never match the strength of a well-drilled Glencar/Manorhamilton side who knew when to stop them and how to stop them and who had too many options upfront where Barry McNulty, Mark McHugh and Gavin Gilbride really caught the eye.

That trio were at the heart of everything good Manor did and all three look like really good prospects while Dillon McDermott, Matthew Gilmartin and Eanna Clancy also stood out.

Glencar/Manor got off to a lightning start when St. Brigid’s keeper Jason Duncan was dispossessed and Cian McManus tapped home from close range. St. Brigid’s Tommy Reilly and Manor’s Barry McNulty swapped points before Duncan made a fantastic one-handed save to deny Tarach O’Snodaigh a goal.

Manor didn’t have long to wait for a goal as Cian McManus drove the ball to the net after another loose ball in the goalmouth and the north Leitrim lads added points from Dillon McDermott and Eanna Clancy.

Two further goals in the space of a minute from Cathal Kavanagh, a fantastic finish, and Barry McNulty virtually ended the game as a contest although St. Brigid’s did add points from Fergal Flynn and Tom Plunkett (free) to end the half 4-3 to 0-3 in arrears.

The second half was a much tighter affair with St. Brigid’s fighting back as Manor missed some great chances. Eanna Clancy and Tom Plunkett swapped scores before Mark McHugh and Gavin Gilbride both capped off good individual displays with points.

Patrick McGovern drove the ball to the Manor net after Plunkett had seen a shot save but Gilbride and sub Jack Kelly responded quickly with points while Barry McNulty added another.

St. Brigid’s grabbed another goal when Plunkett saw a powerful free rebound off the post and sub Oisin Quinn tapped home but the final word rested with Glencar/Manor when Eanna Clancy pointed to seal a dominant win.

Glencar/Manor had a lot of contenders but it had to be between Barry McNulty and Gabriel Gilbride with Mark McHugh close behind. For St. Brigid's, Sean Flynn, Darragh Gunn, Tom Plunkett and Patrick McGovern caught the eye.

Talking Point: Glencar/Manorhamilton look to have another talented crop coming through for the years ahead but there will be serious challenge in the years ahead from St. Brigid's once they catch up to the physical power of the north Leitrim men.

Turning Point: Two goals in the space of a minute midway through the first half got Glencar/Manor clear and ended the game as a contest.

Ref Watch: Fintan McBrien was solid, might have penalised persistent fouling from St. Clare's a little more but didn't affect the game.

Highlight: Two great goals from Cathal Kavanagh and Barry McNulty really stood out while a fantastic one-handed save from St. Brigid's keeper Jason Duncan was another highlight.