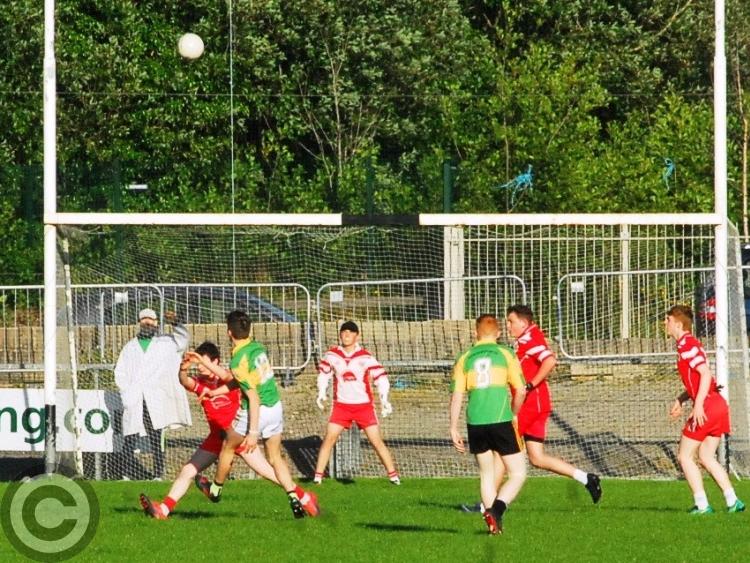 A Gortletteragh player fires over a point. Photo by Willie Donnellan

Inspired by the outstanding Shane Mallon, Gortletteragh saw off a determined St. Patrick’s Dromahair to win the U15 League 13-a-side title on Tuesday week last in Ballinamore.

After a good sporting game in which both goalkeepers produced some outstanding saves, it was the foundation Gortletteragh, who have a few players from Bornacoola in their ranks, built in the first half that proved crucial with two goals from Mallon giving them a lead they never surrendered.

Dromahair fought back and reduced a ten point lead down to three points in injury time and were denied a draw that their efforts perhaps deserved with a full-length diving save from Gortletteragh keeper Killian McCauley.

Gortletteragh dominated the early stages but kicked two bad wides from frees before they opened the scoring on eight minutes when Shane Mallon kicked over a free followed quickly by a goal  from the same player when he finished expertly to the net from a tight angle.

Dromahair got their first score on 12 minutes a great point from Jamie Cawley but Gortletteragh extended their lead with two further points, one a great effort from Odhran Heslin and another from midfielder James Cunningham after a great run.

A great save from the Dromahair goalkeeper Stephen Burke denied Shane Mallon a certain goal and the tit for tat continued as a Jake Shields point for Gortletteragh was followed by a similar score from Shane Mallon.

Gortletteragh looked in complete control when Mallon was on hand two minutes later to finish to the net following a defensive mix up but Dromahair fought back with a great goal  from James Clinton.

With a slight breeze in Dromahair’s favour for the second half, the game was up for grabs as Gortletteragh led 2-5 to 2-1 at the break.

But Gortletteragh had no intention of surrendering their lead and they started the second half in great style when a long pass from Conor Niblock found James Doyle and he pointed to extend their lead.

But to their credit, back came Dromahair and points from Jason McKenny and James Clinton  kept Dromahair in the game.

However, Gortletteragh were always able to respond and points from Shane Mallon (free) and Jake Shields, from play after a good pass, extended Gortletteragh’s  lead with only five minutes to go.

Dromahair refused to lie down and points from Ruairi Power and Jamie Cawley reduced the deficit to two points but a great run and a  point from man of the match Shane Mallon  extended Gortletteragh’s lead which would be there last score of the game.

Dromahair kept battling and it took a great save from Gortletteragh goalkeeper Killian McCauley when he dived full length to deny Dromahair a certain goal deep into injury time and a draw which would have been a fair result.