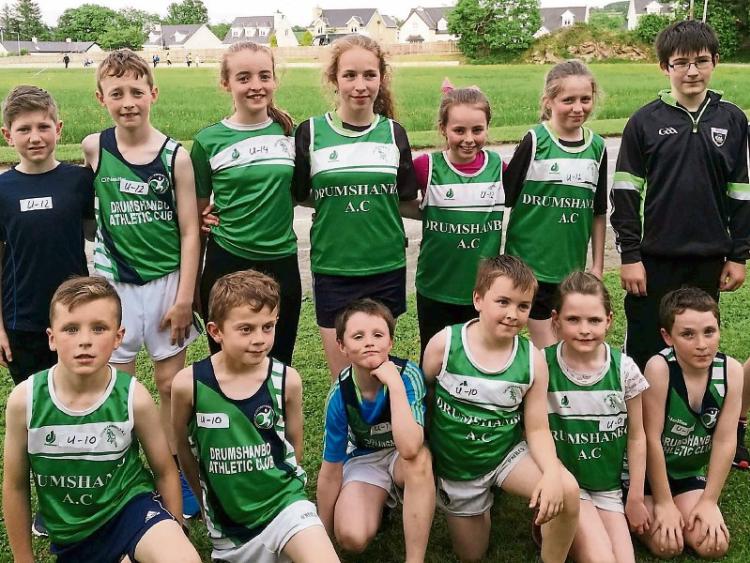 On a day when athletes braved torrential rain and stone-baking heat, Gaffey finished an excellent fifth in the Intermediate Walk in a time of 10.20.55 with fourth place recording a time of 9.59.77 in a high standard race.

Alannah McGuinness of Mohill Community College and Toyosi Fagbo of Carrick-on-Shannon Community School both finished seventh in their 100m sprints, Alannah running 13.12. Toyosi's race came in the middle of a torrential downpour that saw the day's programme suspended for a time.

In the Minor Girls 100m, Sophie McCabe finished 8th in a time of 13.70 while she also ran the lead-off leg for the relay team, which included Lauren Reynolds, Aoibhinn O'Dowd and Katelyn Gannon, who finished seventh in a time of 56.35.

Tenth places were the order of the day for Ballinamore Community School duo Ellie O'Rourke and Katie McNulty on the track and Drumshanbo VS's Emma Heeran in the Shot.

Emma threw 6.91m to finish tenth in a competitive Junior Girls event while Katie was just outside her personal best in the Inter Girls 3,000m with a time of 11.36.50, quite an achievement for an athlete who hasn't run before.

In the Junior Girls 1,500m, Ellie O'Rourke made a brave effort to go with the pack in an incredibly fast race and despite a tough last lap, the Fenagh girl was marginally outside her personal best with a time of 5.13.18.

In other results, Saoirse Wynne, daughter of Carrick AC Masters runner Ann, was just outside the medals in the Junior Girls Hurdles, her time of 12.07 just over a tenth of a second from a medal as she finished an impressive fifth.

The track at Sligo Institute of Technology will host the first day of this year's Connacht Track & Field Championships when it will be the turn of the county's youngest athletes to shine.

Next Saturday will see the U9, 10 & 11 Team competition where two competitors from each club are paired with their performances added together to decide who gets the medals. The top three in each event from each county qualifies for Connacht so the standard is sure to be high.

The U12 and U13 Individual Championships will also be held in Sligo with some very talented young athletes looking to impress. Sligo also hosts the Connacht U14 to Senior Track & Field the following Saturday, June 17, with places in the All-Irelands at stakes.

Carrick AC's Eanna Madden ran 21.58 from lane 2 in Salamanca on Saturday. Next Saturday will also see Gerard O'Donnell make his first outdoor appearance at the Northern Ireland championships in Belfast.