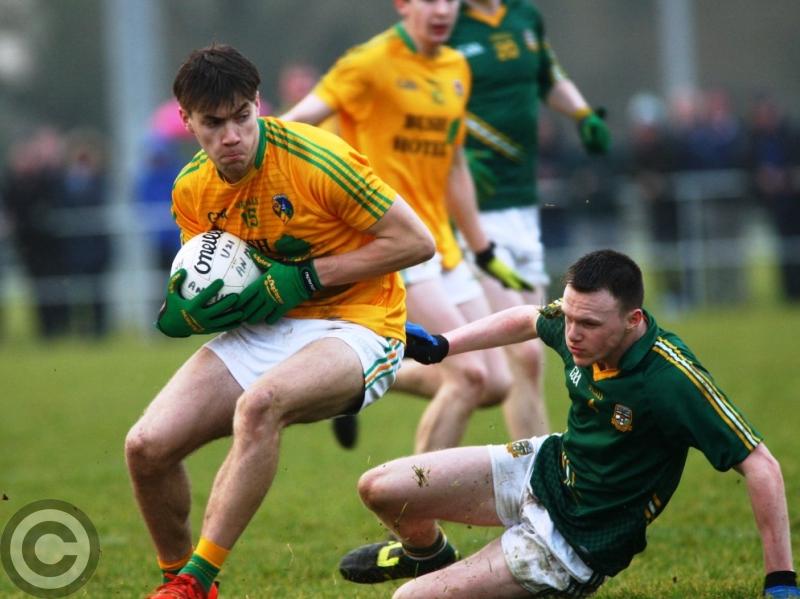 Darragh Rooney in action against Meath U21s earlier this year

It didn’t look likely at the end of January when he sustained a broken collarbone but Darragh Rooney enjoyed what can only be described as a dream Leitrim Senior team debut in Ruislip.

And the Melvin Gaels youngster is determined to enjoy many more big days in Leitrim colours.

The Glenade youngster made his Senior team debut against London and it was a dream one as his first ever score was also a goal - “It was a nice one, it was my first score for the Senior team.”

And it is those “dreams” or visualisation that helped Darragh to find the net - “It was nice to get it but you visualise doing it before the game, that is what Johnno is telling us, keep visualising everything you do, keep visualising the game and that is what I tend to do before a game. I visualised myself getting a goal and it all worked out.”

Scoring goals and imposing himself on a game all adds up to helping the team - “It is all about the team but I nearly feel like if I go into the game wanting to get man of the match or wanting to score a goal, I nearly feel better and to bring players into it.

“Obviously the team comes first but if you play well yourself, the team is going to play better and that is the thing, you have to look at beating your man.”

But the dream debut against London seemed a long way off when Darragh cracked his collarbone in a goal-saving challenge against Offaly U21s in January, an injury that ended his U21 season.

However, Darragh never believed his target of lining out against London was over - “At the time, all I was thinking about was stopping him but if I knew I was going to break my collarbone, I don’t know if I would have went in as hard as I did.”

“I suppose when I broke the collarbone, I never really wanted to give up on the U21s but as it got closer, I knew  it wasn’t really on so I set my mind on London and the Leitrim Seniors and worked towards that.”

His recovery enabled him to line out in Ruislip but nerves played no part as Darragh pays tribute to the influence of his team-mates and management - “I was a wee bit but there were lads who were giving me advice and the management.

“You read that many autobiographies by players that you know what it is going to be like, you just kind of visualise it in your head. The preparation we had was excellent and everything we did, we left no stone unturned. I had no nerves on the day, I thought I’d be more nervous.”

Asked if the reality of playing with Leitrim matched his dreams, Darragh said “It has been everything and more than I expected. All the older lads would give you advice, Emlyn Mulligan, Ronan Gallagher, Gary Reynolds and they’d have you nearly settled before it happens so you’re not nervous at all.

“Emlyn is a loss but you have to get over those things. He is still there which is great for the advice he brings and the morale he brings to the team. I always looked up to him when I was younger and now he is like a mentor this year and he is very good to have around.”

And Darragh believes that the spirit and togetherness in the Leitrim camp played a major role in emerging from London with a victory - “We have a great bond on and off the pitch. There’s not many Senior lads over 25 and we all get on great.

“We knew that London was going to be a test but they had no passion playing for London. We’re from Leitrim, these are our roots and we’ve got that passion and that and Benny and lads kept telling us that and that’s drove us on.”

And there is no doubt that Darragh, far removed geographically from the Leitrim Roscommon border in Glenade, is well aware of the local rivalry and banter with the Rossies - “We hear enough from underage. My first year Minor, we won the League and we played them in the championship, we were very confident going into it and they caught us on the hop. There is always that bit of rivalry, we hear enough about it from the boys and we’re well aware of it.

He may be facing into his first Senior meeting with Leitrim’s greatest rivals but Darragh believes that Kevin McStay’s team are vulnerable - “They are definitely a different prospect to London but at the same time, they’re not having the year they set out to have.

“I think they’re on a bit of a low after a tough year and we’re on a high after beating London so anything can happen. If we can get on top of them at the start and keep it a tight game, their fans won’t like that and won’t get behind them while our fans will get behind us and anything can happen in the last few minutes.