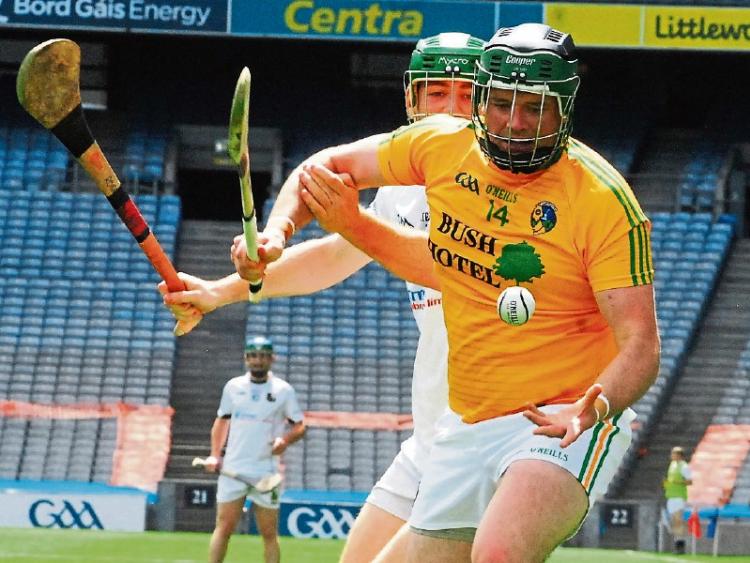 Leitrim's Clement Cunniffe tries to get the sliothar away under pressure last Saturday in Croke Park. Photo by Willie Donnellan

Terming the performance in both halves as like “night and day”, long serving veteran Clement Cunniffe cut a deeply disappointed figure in the dressing room in Croke Park last Saturday.

In the midst of an eerie silence, Clement managed to find the words to describe a disappointing day for the county hurlers as Warwickshire turned around a two point halftime deficit to run out six points winners.

“It went away from us big time,” agreed Clement when asked about the second half, “The first half, it was unusual enough to be starting half-back and then put in full-back so I could see the hurling we were playing in the first half, I was taken by surprise.

“We were two points up at halftime, we were kind of in control but the second half, it was like night and day. Our first half was tremendous, we rolled over them, we were flying but the second half, we kind of crumbled and I’m not sure how many lads we had sent off, was it one or two, if you are going to winning anything, especially in Croke Park, you need to have 15 on the field.”

Referee James Connors came in for a good deal of criticism among Leitrim supporters and Clement felt Warwickshire got frees that bit easier - “They got an awful lot of frees and their man converts them, he doesn’t miss them, he is a serious hurler, a serious man with the frees.

“The referee made those decisions, I thought some of them were soft, this isn’t sour grapes now but they got the rub of the green when it came to some of those decisions. We missed a few points and I think it all kind of imploded then.”

Despite the obvious disappointment, Clement enjoyed the experience of playing in Croke Park and believes there is a bright future for Leitrim hurling - “It was a brilliant experience, we were here last night looking at the pitch and you just focus on the pitch.

“Running out on the field, it was great support. The pitch is absolutely fantastic, it is like a carpet and you’d love to play there all day, every day. It was great to get here but it would have been nice to have won it. Wwe really pushed them and at halftime, we knew they were worried.

“But the second half, they got a bit of a run on us and everything kind of amalgamated and it just went bad for us. Look, we just have to lift up and push on. There is a great bond in this team, we’re tight. There is a good panel of lads, we’re a close knit group.

“We did some good hurling during the campaign, the Sligo game was fantastic hurling and that is what adds to the frustration, we’ll think about it more over the next few days but we will just have to let it go.

“We might be the poor relation in hurling but we shocked a lot of counties this year and played some great hurling and as Paddy Phelan was saying, training has come on, the skills level have come on so we will see for next year.

“Hopefully, everyone will stick around, it is good bunch of lads and we can push on again hopefully.”

When the question of the future comes up, it is natural to ask about his own but Clement doesn’t see his Leitrim career ending any time soon - “I don’t think I have any option, I shouldn’t say this - I’m like a prisoner.