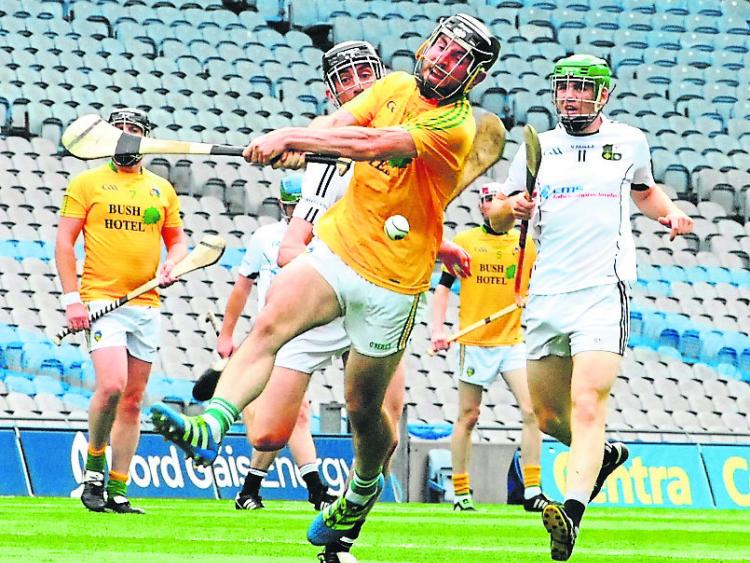 James Glancy is hooked during the first half of the Lory Meagher Cup Final before gathering the loose ball and scoring last Saturday in Croke Park. Photo by Willie Donnellan

One of the veterans of the Leitrim team, James Glancy knows better than most about the hardships of being a Leitrim hurler.

Last Saturday’s Lory Meagher Cup Final in Croke Park was a payback for all those years of toil without reward but for James and his team mates. While there was great pride involved with lining out for Leitrim in Croke Park, the manner in which the game unfolded in the second half made defeat a bitter pill to swallow.

While the pain of defeat was clear to see on the faces of all connected with the Leitrim team, James acknowledged it was a very proud moment to represent his county at headquarters.

“It’s very easy to say but there was a sense of pride running out. There was only a couple of thousand at the match but it felt like it was a huge crowd. There has never been a crowd like that at a Leitrim hurling game ever. Something like that can only be good and hopefully we can build on that.”

Having produced a fine opening half performance, James and his team-mates were treated to a tremendous ovation from the Leitrim faithful as they returned to the dressing room.

The Carrick-on-Shannon man agreed three unanswered points at the end of the first half gave Leitrim plenty of reason for encouragement ahead of the second half.

“Yeah, even the supporters cheering us in at half-time. The mood was very good in the dressing room at half-time, everyone felt it. The last couple of games we always came out strong in the second half but today … it just didn’t happen and it is very disappointing.

“We felt it was there for us at half-time but it didn’t follow through in the end.”

The sense of frustration was palpable as James attempted to assess how the game slipped away from Leitrim.

“We knew it was going to be a tough game and we knew everything needed to go right for us and at half-time it looked like we going in the right direction but in the second half it just didn’t fall for us for whatever reason. There’s lot of different reasons, we all know, it’s just very disappointing.”

Key for Warwickshire was the free-taking of Liam Watson and while James was quick to pay tribute to the contribution of the Antrim man, the Leitrim men were left kicking themselves as a result of some of the frees they conceded.

“He’s probably used to operating at a different level but we would be disappointed with some of the frees we gave away but that’s just the way it goes. It’s disappointing. There were so many things that were frustrating everybody.

“We were hoping to push on after half-time and we just couldn’t get that point or something to settle us into the second half. It went from them clawing it back to them going ahead and stretching out the lead. It was a frustrating second half.”

One unique aspect of Leitrim's outing in Croke Park was that Hawkeye was deployed twice during the opening half with a point being awarded to Leitrim while a Warwickshire attempt was judged to have been off target.

Commenting on playing with the state of the art technology James remarked “It’s great, we got one and they got one cancelled. It’s something different alright, it’s not something you see in Pairc Sean!”

While the Lory Meagher campaign may have ended in heartbreak, there are as James agreed, many positives that can be taken from the year.

“There are a lot of young lads there. The three Moreton lads, the captain Karl McDermott. There are lots of young lads there that are going to be around for a while and something like this, we got to experience it, lads got to play in Croke Park and hopefully we’ll be looking to get back again sooner rather than later.”

While it is easy to say Leitrim will benefit from the experience of this year and should be in a strong position to go one step further next year, James was left ruing the fact that all their hard work was ultimately in vain.

“It’s not easy. We felt we were knocking on the door the last couple of years but we just couldn’t make the breakthrough. This year we got to the final and we thought we had a good chance.

“Hopefully, we’ll be gearing up to come here next year, we know we’re capable of coming here we just need to improve again on a few bits and pieces here and there and hopefully we can give it a better shot next year.”