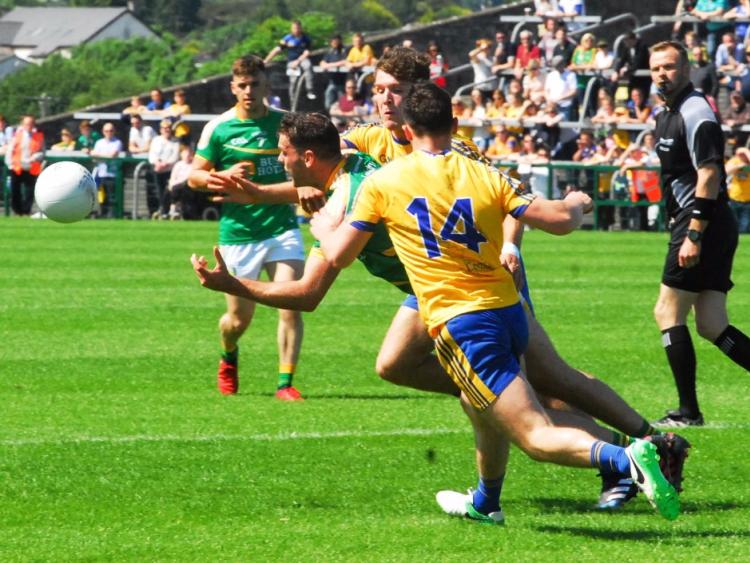 Donal Wrynn gets the ball away under pressure. Photo by Willie Donnellan

Even with the passing of three days, it is hard to make any sense of last Sunday’s destruction of Leitrim in Hyde Park, a defeat that was seared into the minds of  fans unlucky enough to witness it.

A record breaking defeat at the hands of Roscommon who appeared to play  in a different universe to Leitrim has unleashed a torrent of emotions around the county, ranging from white-hot anger to resigned acceptance.

Hyde Park was a boiler-house, the unforgiving sun scorching both teams but it was Leitrim's challenge that melted in the face of the heat from a red-hot Roscommon.

Everyone and everything has been a target for the recriminations that have burst forth like a raging flood since Sunday with everything from the players, management and the warm-up targeted  and even rumours  were doing the rounds on Monday evening.

As easy as it is to blame everyone left and right and centre, and blaming a warm-up has to be stretching things, no pun intended, but maybe we are finally coming to a realisation of Leitrim’s standing in the Province as this decade has witnessed just one win over a home based team.

With every county adopting a focussed approach to underage development and tactical innovations,   the chances of catching one of the big guns on the hop is receding more and more by the year.

A one point victory over Sligo in 2011 is the only win over a home based team since 2010 with losses of five points to Roscommon in 2010 followed by 12 points a year later, a 22 point hammering in McHale Park in 2012 and a devastating one point  defeat to London in 2013.

Two eight point losses to Galway and Roscommon followed and that doesn’t include the Qualifiers where victories over Wicklow and Waterford, hardly the game’s elite, are our only highs while the closest we got was a two point loss to Laois in 2012, the average losing margin just over 12 points.

And it is not as if there are hordes of players out there who are being overlooked with our clubs faring equally badly at the Connacht Senior Club level, Aughawillan’s win over Tubbercurry the only Leitrim victory and even that was followed by a record breaking 35 point loss to Corofin!

So while optimism was raised with the influx of so many young players, Leitrim’s results have been steadily declining and, realistically, it is going to take years before we even get back to moral victories like the one point losses to Mayo in 2006 or pushing Galway to the limit any time during Dessie Dolan’s reign.

Blasting players, blasting management, blasting one and all won't solve anything in the long term but our ambitions and dreams have to be tempered by realism.

No, I am not advocating sullen resignation of the situation but there has to be a realistic appraisal of where  Leitrim football is at the moment and where it can get to, realistically, in the next year, five years, ten years and even 20 years!

And if you want to be realistic, consider this: Leitrim started six U21s against Roscommon and brought on two more  and, as harsh as this sounds, this was from a Leitrim U21 team that lost to a Galway side who have just two members on the Galway Senior panel and that Galway squad reached the All-Ireland Final!

But while we all hoped that Leitrim could drag Kevin McStay’s team into a dogfight and  capitalise on supposed unrest in the camp, Roscommon were a team on a mission and unlike recent years when they eased up, the home team kept the foot firmly placed on the pedal!

Roscommon, had 11 weeks to line up Leitrim in their sights and it was clear they had their homework done as their hard running and quick deliveries punched holes in the Green & Gold defence repeatedly.

Roscommon's defence is weak  but despite the best efforts of the irrepressible Darragh Rooney, Leitrim simply couldn't win enough possession to put sustained pressure on the Rossies' rearguard, their mastery of midfield the source of their  utter dominance.

Bright spots for Leitrim were few and far between - Brendan Flynn performed well between the post even if some have criticised his kickouts. But the kickout problem was down to Roscommon's complete mastery in that sector.

Brendan Gallagher, Paddy Maguire, Conor Cullen & Niall McGovern had  bright moments but no more than that as Leitrim imploded under the pressure Roscommon applied in every inch of the magnificent new surface in Hyde Park.

But finally, the reason Roscommon won so convincingly may just be the simplest of all - Roscommon are clearly a better team than Leitrim at the moment, their Division One status reflected in their performance.

That may change in the future but it is going to take time, hard work and, most of all, patience!

Main Man: All the best performers were in Roscommon blue  but  Diarmuid Murtagh was the man who made the winners tick. For Leitrim, Darragh Rooney underlined his potential with a fantastic display, Brendan Flynn too was outstanding and Brendan Gallagher stood out too.

Talking Point: There have been bad days, some in the very recent past, but with the wave of optimism generated by young players coming into the side, this must rank as one of the most demoralising. And it must surely pave the way for a properly graded championship to suit all counties, not just the giants of the game.

Turning Point: Roscommon's first goal burst any illusions Leitrim fans had and left nobody in any doubt that Kevin McStay's team meant business.

Ref Watch: Anthony Nolan didn't have a lot to do, made the right calls on the black cards and could have issued a few more.

Highlight: Darragh Rooney's spectacular goal was something for Leitrim fans to cling to.

Lowlight: How do you pick one? Just far, far too many mention.