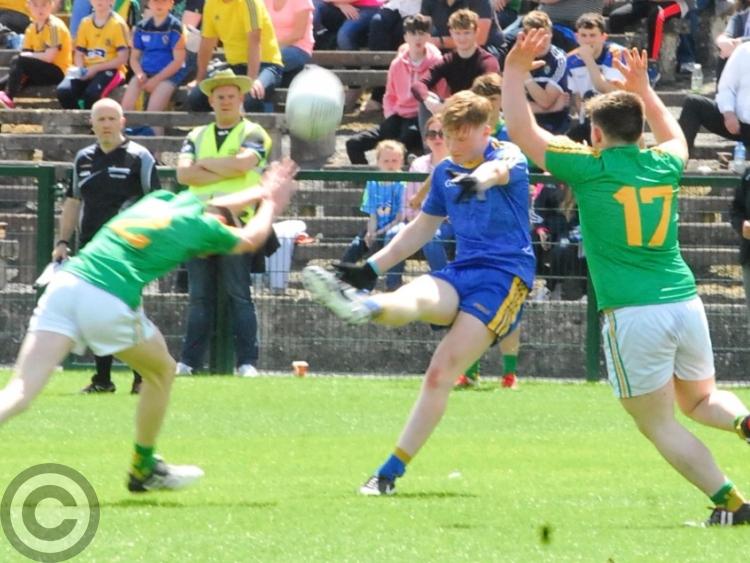 A more composed and clinical Roscommon dispatched a highly rated Leitrim at their ease in last Sunday’s Connacht U17 Championship Semi-Final.

The curtain raiser in the Hyde Park showed up many of the same problems that cursed the Senior team later in the day as the U17s lacked the penetration and know-how of the home team who looked sharper, more physically powerful and motivated.

Many had opined that this U17 team was the last hope of Connacht glory for Leitrim teams this year, more so than the Minor team that many of these players will also see action for, but Roscommon set the terms of engagement and always looked comfortable and in control.

Leitrim had 11 wides over the hour, six in the first half, but dropped another three into the keeper and they simply couldn't afford those stats against a Roscommon team where every one of the forwards posed a real threat.

What also cursed Leitrim, and was the bane of the Senior team's life, was poor kick passing with Green & Gold moves breaking down time and time again as kicks were easily intercepted and it forced Leitrim into ponderous, lateral movement that was never going to break down a physically strong Roscommon outfit.

Leitrim did have some bright moments - Ciaran Cullen looks a real life prospect to match his brother and father while Oisin McLoughlin, subdued from what he is undoubtedly capable of, still looked like the only player capable of unlocking the Roscommon defence.

The loss is chastening and will certainly do little for the mood in the county ahead of the Minor team's visit to Markievicz Park next Wednesday in the Championship.

Roscommon started quickly with a Paul McManus point after just 25 seconds and, 30 seconds later, Paul Carey scored from a very tight angle as Leitrim couldn’t get out of their own half.

Shane Cunnane pointed a 50 yard free but after Goldrick put a free badly wide, Leitrim drew level with a Reynolds 45 yard free and a nice point from play from Oisin McLoughlin.

Leitrim were on top with Roscommon keeper Michael O’Donnell batting out an Aaron Hoare shot and fielding a McLoughlin effort as Mark Diffley shot wide.

It was wides that Leitrim couldn’t afford as Roscommon cut loose with five points in seven minutes with Ciaran Sugrue, Andrew Lyons, Peter Gilhooley, Sugrue and Gilhooley again all on target from play in a devastating spell.

Paul McManus saw a good shot blocked while Lyons was also denied at close range but a shocked Leitrim finished the half with a Mark McGee point, leaving Roscommon 0-8 to 0-4 ahead at the break.

Leitrim would have hoped that with the wind in the second half, they could reel in the four point lead but Roscommon struck a devastating blow when a quick free was off-loaded quickly to Ciaran Sugrue and his powerful shot crashed off the underside of the crossbar, seemingly crossing the line before rebounding, hitting the keeper and going back into the net.

Leitrim responded positively with a great McLoughlin point from play and a Reynolds free but two Roscommon points for Peter Gilhooley and Cunnane negated those gains. McLoughlin hit a ninth minute free but Leitrim’s surge seemed to hit a brick wall.

Roscommon ended a seven minute period without a score with two points from Gilhooley and Sugrue. McLoughlin hit a free, James Larkin responded before Jack Gallogly made a fantastic diving save to tip Andrew Lyons goalbound shot onto the crossbar and clear.

Mark Diffley broke free and seemed to be pulled down inside the square with McLoughlin converting a free. The game petered out with Gilhooley (free) completing Roscommon’s tally as subs Vincent Sweeney and Daithi McGloin both added injury time points.

Main Man: Leitrim's players looked caught in the headlights as few made an impact. Keeper Jack Gallogly made a fantastic save, Jordan Reynolds, Aaron Hoare, Oisin McLoughlin, Mark Keegan, Vincent Sweeney and Mark McGee all had moments but Ciaran Cullen was the outstanding performer on a day when all the best players wore Roscommon blue.

Talking Point: This was a highly rated Leitrim team, some even saying more promising than the County Minor side, but the failings that bedeviled the Senior team were all too evident here with players losing the ball in the tackle, no penetration and poor kicking skills all contributing heavily to a poor showing.

Turning Point: Roscommon were in complete control at halftime but Ciaran Sugrue's goal barely 30 seconds into the second half completely killed off  Leitrim's challenge.

Ref Watch: Garryowen McMahon was lenient towards Leitrim but the decision  to award a Roscommon point, in full view of a linesman, when the ball went wide was incredible while fans complained heavily over the decision to disallow a score for Ciaran Cullen.

Highlight: His Dad made his name as a full-forward but Ciaran Cullen stood out in the full-back line.

Lowlight: Leitrim's failure to build any sort of momentum and lack of an attacking plan.