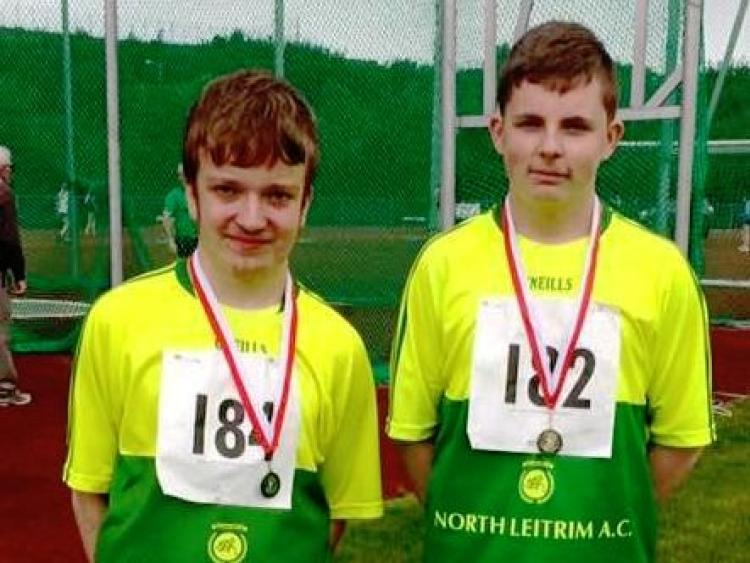 Aaron Bradshaw and Oisin Carolan dominated the U17 throws

North Leitrim AC had an incredible day as they took home an 41 medals including 16 gold medals over the entire range of events at Saturday’s Connacht U14 to Senior Track & Field at IT Sligo.

There were some excellent performances in a number of events on a very windy and hot day with North Leitrim AC’s Niamh Carolan running an excellent time in the U14 1,500m to win gold while Carrick AC’s Toyosi Fagbo was an impressive winner of the U14 100m title.

Top winner on the day was North Leitrim’s Aaron Bradshaw who claimed four gold medals in the U17 Discus, Hammer, Shot and Javelin with clubmate Oisin Carolan completing a one-two by taking silver in all four events.

Leitrim also had a clean sweep in the U15 Girls 1,500m with the medals going to three different clubs. Ballinamore AC’s Ellie O’Rourke led the way from the start to claim the gold in a time of 5.14 while Carrick AC’s Lauren Reynolds and North Leitrim’s Sarah Brady also setting new pbs as they claimed the medals.

O’Rourke and Brady also claimed the silver and bronze medals over 800m.

Darragh Mitchell claimed gold in the U15 walk, maintaining Leitrim’s tradition in the event while Diarmuid Giblin won the U15 250m hurdles title to add to the silver medals he won over the 80m hurdles and 200m, with Mitchell third in the 250m Hurdles also.

North Leitrim also claimed gold in the U15 4 x 100m relay while there were silver medals for the Carrick AC U17 Girls and North Leitrim U14 Girls  teams and bronze for the U15 North Leitrim team.

Carrick AC performed well in the sprints with Toyosi Fagbo a clear winner of the U14 80m before he took silver in the 200m. Shauna McCabe won two bronze medals in the U18 100m and 200m while Alannah McGuinness was second in a competitive 100m before finishing fifth over 200m.

Clodagh Sheerin claimed an impressive gold in the U17 200m Final after taking bronze over 100m while Fiachra O'Dowd picked up two silver medals with impressive times considering the very strong wind facing the sprinters.

Sophie McCabe also won a pair of bronze medals in the U14 Girls 80m and 200m while in the distances, Fiachra Henry picked up a silver in the U17 1,500m and bronze over 800m with clubmate Fionn O'Brien fourth in the longer distance.

Drumshanbo's Eadaoin Lee  just missed out on the medals in the U14 Long Jump, finishing sixth while there were silver medals for Helen Verachtert U14 Javelin, Ashling Cullen U15 Walk, Lara Mulvaney-Kelly U15 Shot Put & Hammer, Cormac Fahey U15 Shot, Shannon O'Hagan U16 Discus & Javelin and John Birney U16 Javelin.

Carrick AC's Anna Corcoran finished third in the U17 800m and fourth in the 1,500m while Carrick's Shane Finn claimed a strong bronze medal in the U14 Shot after good performances over 100m and 200m.

Evan Corcoran just missed out in the U16 200m and 800m events, finishing fifth and fourth respectively

In the Senior events, Carrick AC's Cathal McElgunn finished fourth over 200m and fifth in the 100mas there was a poor turnout in quite a number of events.

The top four individuals in all events qualify for the Nationals in July and all clubs are asked to ensure that anyone not intending to compete should inform their club secretary as soon as possible.