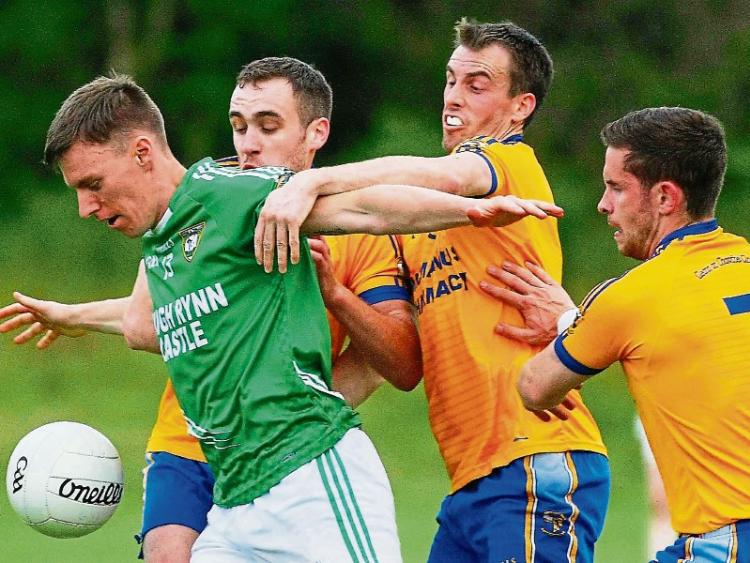 Melvin Gaels and Mohill are on the brink of qualifying for the Dunnes Bar Division One Final after a busy but successful four days last week.

The Kinlough men picked up four points to leave them all but certain to make the Division One decider after hard fought victories over Aughawillan and Drumkeerin, both by narrow margins but victories nonetheless.

The Gaels had two points to spare against last year’s County Champions, 1-10 to 1-8, and it was even closer against Drumkeerin, a 2-11 to 2-10 victory ensuring them of top spot in the table.

Mohill also had a productive spell as they marked the opening of Glencar/Manorhamilton’s new pitch in Boggaun with a hard fought 0-15 apiece draw with the home side and followed it up with a comprehensive seven point victory over Aughawillan on Saturday, with County star Ronan Kennedy leading the way with an impressive 2-4.

Glencar/Manor kept the pressure on with a 2-12 to 0-7 victory over Fenagh St. Caillin’s but Ballinamore Sean O’Heslin’s lost vital crowd with a 2-9 to 0-5 loss to St. Mary’s on Wednesday, regaining some ground with a comprehensive 1-16 to 0-6 over relegation threatened St. Patrick’s Dromahair.

Indeed, all the teams in the relegation battle had mixed days - Fenagh’s lost to Manor came after they shocked Allen Gaels with six goals as the Drumshanbo men lost by three points on Wednesday despite registering a tally of 2-13 that would have won every other game on the day.

Unfortunately for the Gaels, St. Mary’s continued their good form with a 3-15 to 0-14 victory, quite an amazing turnaround for the Carrick men who looked as if they were destined for a relegation dogfight earlier this year.

Gortletteragh moved well clear of the relegation zone with victories over Aughnasheelin (1-15 to 2-9) and Dromahair (0-14 to 0-8) with Aughnasheelin gaining an important 2-10 to 2-8 win over Drumkeerin.

Those results have had a dramatic effect on the table - Melvin Gaels need just a point to secure a place in the Final as they have the head to head result with Glencar/Manorhamilton while Mohill realistically need just a point given their huge scoring difference.

The battle at the bottom of the table is incredible - Allen Gaels simply must win and hope that two out of Fenagh St. Caillin’s, Drumkeerin and St. Patrick’s Dromahair drastically drop points.

And there is one monster game left in the fixtures with Fenagh due to take on Dromahair at home, a game that could decide the League status of the winner and loser.

Allen Gaels have difficult games to come against Glencar /Manorhamilton and Gortletteragh and even two wins won’t be enough as the Drumshanbo’s only head to head advantage came with a victory over Aughnasheelin, all three teams above them winning in the head to head meetings.

However, there may be a tiny glimmer of hope -if the Gaels win both their games and end up in a tie with any two of the three teams immediately above them, their scoring difference is better than Dromahair and only marginally behind the other two so a big win might just save them.

But the odds would appear to be against the Drumshanbo outfit and despite some heartbreaking losses and improved displays, they look as if they will be returning to Division 2 next year.